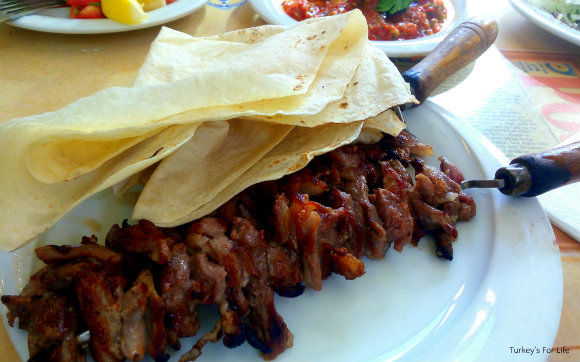 This post is about cağ kebabı – our favourite kebab – and Şehzade Cağ Kebap in the Sirkeci neighbourhood of Istanbul.

As usual, with us, we have a little background tale to tell around cağ kebabı.

Food that’s memorable for all the right reasons; it’s a matter of opinion, of personal experience.

For us, our happiest foodie moments in Turkey are ones where the dish is simple, full of flavour, a texture that marries with the food we’re eating.

And it’s often a dish that gives you a happy glow, either because it’s just downright good or because it takes you back to another place and time.

You see, we first came face to face with cağ kebabı when we found ourselves temporarily wandering the icy cold streets of Erzurum after we’d got off the train from Ankara in May, a few years back.

We were waiting for the bus to Patnos to go and stay with a friend and had a couple of hours to spare.

(Apologies to Erzurum for not being able to show off what we understand to be a beautiful city – just a scene from a street near the bus station.)

As with our Tekirdağ Köftesi experience a few years before, we had  no idea that these two words we were seeing, ‘cağ kebabı’ were the title of a revered speciality dish.

And, let’s face it, it was icy cold and foggy and we weren’t really in much of a mood for pondering such things.

We just wanted to complete our current journey that was already over 24 hours long.

Anyway, fast forward to a few days later and we were on a road trip around the east of Turkey.

A little ‘adventure’ where we got stuck up a mountain and had to turn back meant we spent an extra night in the city of Iğdır.

And that was where we visited our first cağ kebabı restaurant.

Photos on the walls of famous Turkish stars. Cem Karaca, Tarkan, scores of others – some forgotten, some unknown.

These were all people who had allegedly eaten in this establishment of meaty heaven. We loved the restaurant. And the food!

Since that time, as well as being a happy foodie memory, the memories have also haunted and slightly grated.

VERY rarely do I wander around minus a camera. So why on earth had I left my camera in our hotel room that night?

Well, aside from making the long journey eastwards again, if we wanted to eat cağ kebabı, Istanbul was always going to be the place.

Not sure why we never registered that fact, in this case.

This is the city that is home to people from just about every region of Turkey, and, inevitably (and wonderfully), their culinary traditions follow.

Why had we never noticed – or even heard about – the famous Şehzade Cağ Kebabı in the Sirkeci neighbourhood of Istanbul before?

A man from Erzurum – traditional home of cağ kebabı – selling this lamby delight in our favourite city?

Yes, very late to the party on this one but who cares? We’re here now!

Sheer joy when we read about it. And it was promptly bookmarked and mapped for our next visit to Istanbul!

Hocapaşa Sokak Is The Place

And on that visit to Istanbul, it wasn’t even lunchtime when we were wandering around Sirkeci; only around 10:30, in fact. But what the heck!

We thought we could at least go and have a look for Şehzade then we’d know where to go when we were ready to eat.

Hocapaşa Sokak in Sirkeci is a pedestrianised alleyway packed with tasty food joints. It’s a famous street, oft written about for its foodie offerings.

And these two food lovers had never been there; until now, that is.

Each little eatery we passed looked so tempting – we’ve got lots of eating to do around Hocapaşa in the future – but, on this day, we were on a personal travel-memory pilgrimage.

We were here for cağ kebabı…

As we reached the end of Hocapaşa Sokak, there it was. Şehzade Cağ Kebap (as it’s written on the sign).

And then we spotted the holy grail – the kebap usta had just lit the fire for the day ahead.

The hunks of marinated lamb were fixed to the horizontal spit, waiting to sizzle and crackle and delight the taste buds of customers yet to arrive.

This was the place we’d heard so much about. And, now, here we were.

Why Wait For Cağ Kebabı?

Barry bobbed his head through the hatch and asked the friendly-looking usta what time we should come back to eat.

We looked at each other. 10:30 am. Did we really want to sit down to cağ kebabı right now?

Damn right we did!

We’d waited years for this and we wanted to see if it was as good as we remembered!

We plonked our bodies down at one of the little tables outside and ordered our cağ kebabı. Then waited with much anticipation…

It’s a celebration of meat! In the area of east Turkey where we did much of our travelling in 2013, meat very much prevails.

The climate isn’t exactly friendly towards delicate vegetables and salad stuffs. Positively hostile, in fact. And yet so wild and breathtakingly beautiful.

We’re happy meat eaters and ate so many delicious dishes in Patnos, where we stayed, and regional specialities, too.

If you’re looking at the cağ kebabı in the photos and thinking, “Well, isn’t it just a horizonatal döner,” we’d love you to remove that from your mind.

Yes ‘döner’ means ‘turning,’ and yes, cağ kebabı turns on the spit. But so does kokoreç – and that’s not döner. It’s kokoreç.

Traditionally, the meat on the spit is marinated lamb.

And you can see from the photo that cağ kebabı really is not döner!

In Iğdır, it was slightly different. The usta almost caressed his sizzling meat spit as he explained to us that he alternates lamb and beef layers.

At Şehzade Cağ Kebabı, you’re in for a treat of lamb.

Lamb that has been slowly rotating past a backdrop of wood-burning flame.

One portion consists of two skewers, two leaves of super thin-lavaş bread. And a side of thinly sliced onion, generously sprinkled with sumac for a zesty tang.

In many photos we’ve seen of the food at Şehzade, you also get a charred pepper on your plate.

But hey, we’ve just rocked up at 10:30am and our usta is busy trying to get us some cooked lamb from his spit. We want lamb!

We want cağ kebabı…lack of a pepper is no deal breaker.

For a few lira extra, you can order a plate of spicy ezme and a side salad. We went for both of those – ezme and spit-roasted lamb wrapped in lavaş; ermm, yes please!

How To Eat Cağ Kebabı

Yeah, we might only be in a simple kebab joint but allow us just to appreciate.

First of all, watch your usta (the master of his trade). This was the bit that caught our eye when we first came across this cağ kebabı.

Unlike döner kebabı where the usta shaves thin slithers of meat before letting it land in the tray below, your cağ kebabı usta takes a long skewer and carefully threads it along and through the layers of lamb.

As he goes along, he slices underneath with his huge knife until the skewer is full.

One skewer filled with elongated bite-sized pieces of lamb.

Some are tender bits of meat, some still have tiny pieces of juicy fat (never gristly) attached.

Others are charred and crispy on the edges where they’ve been close to the flame. Two immensely tasty skewers of lamb, two sheets of lavaş.

And, as with the liver kebab skewers we so relished in Ankara, you take one sheet of lavaş in your hand, place your skewered lamb on top.

Then wrap your lavaş-covered hand around it and pull the meat from the skewer so that it sits in a line along your lavaş.

Sliced sumac-covered onions over the top, a good drizzle of spicy ezme. Then roll it up take a bite.

Ladies and gentleman, we are talking pure foodie heaven.

And for us, cağ kebabı is too good to be completely consumed wrapped in a sleeping bag of lavaş.

Just take about two thirds of the lamb from each skewer for your lavaş for now.

That means, afterwards, you’re left with a few unadulterated lamb treats to be savoured all on their own.

Just you, a fork and a piece of lamb sizzled over an open flame.

It’s worth it. Honestly. Best of both worlds!

As we tucked into our kebab, we glanced across the pedestrianised street to the köfte salon, opposite; apparently voted amongst Turkey’s top 10 köfte joints.

We made a mental note to try here on our next Istanbul jaunt and then glanced at the customer munching his way through his morning köfte.

“That’s him who drinks at Bahane bar in Çalış,” said Barry.

Wherever you may roam in Turkey, you can always expect a familiar face!

And was the cağ kebabı as good as we remembered from our East Turkey travels?

We don’t know where they source their lamb but we can definitely say that Şehzade is no pretender!

So, when’s our next Istanbul jaunt…