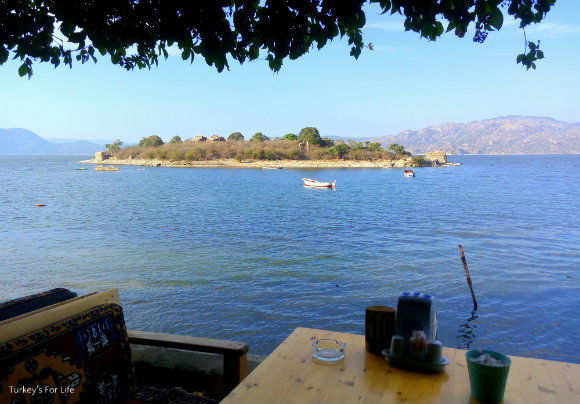 We were on a road trip around the southwest corner of Turkey. Having left the pretty town of Selçuk, we decided to head back to Fethiye via the longer route mainly because we wanted to witness Lake Bafa for ourselves. It was never going to be a long stay around the lake – just a pass by – so this article is not a guide to Lake Bafa Nature Park. No, we just wanted to experience it, for now. Surely there must be a lakeside restaurant where we could stop off for a bite to eat en route home? There was. Çeri Restaurant…

“Is it famous for any particular dishes around here?”

We were heading along the south shore of the lake towards Milas looking for any clues of eateries. At 10 miles long, there had to be somewhere. As a former hobby fisherman, Barry was keen to know if there was any particular menu treats of the lake-life variety.

“No idea. All I know is it’s a really important area for migratory birds.”

Of course, I’ve done much more research about Bafa Gölü – to give it its Turkish name – since our road trip and this famous Turkish lake is important for so many more reasons, too. But, for this article, we’re looking for lunch. We just want to sit by the water and get a tiny feel for the area. Eventually, as we came to Pınarcık on the far southeastern corner of the lake, a huge sign on the road pointed us to the lake shore and Çeri Restaurant. Time to find out if there would be any exciting goodies on the lunch menu…

Oh, happy days! The menu had lots of the usual suspects on it. Köfte, kebabs, meze dishes. And then Barry’s eye caught the fish section. Amongst a whole host of underwater life, Bafa Lake plays host to eels. Çeri Restaurant has eels on the menu – sold by the kilo.

“Wooow, we can’t not have eel. Well, I’m definitely having it,” said Barry.

Neither of us had eaten eel before and, whilst I love all foods local – and new –  I can’t really say the thought of it was particularly appealing. Eel is not the most attractive looking species and I couldn’t imagine what it would taste like. But anyway, we were here now. We love to try local specialities. I would regret it if we left without trying it.

And besides, Çeri Restaurant had one of those friendly-looking cartoon boards up, explaining to customers about the wonderful benefits of eating eel.

Yes, according to Çeri Restaurant, if you eat eel from Lake Bafa, you will gift yourself benefits such as:

But as for the rest, do your own online research and you’ll see that eel is, indeed, apparently very good for you – including many of the ways listed above.

Anyway, we’d had a substantial breakfast at our Selçuk digs, Barım Pension, so we went for a light meze of roasted red pepper in olive oil and garlic. ‘Közlenmiş biber’ or ‘kapya,’ in Turkish.

Fresh crusty Turkish bread dipped in the garlic olive oil that was smothering the crimson peppers. Perfect! We took in the scenery and our surroundings as we ate.

Çeri Restaurant has got ‘traditional Turkish breakfast‘ written all over it (not literally). Seating is plentiful; all enjoying panoramic views of the lake. There are köşks for those who want want a less formal table setting.

Again, further research on returning home revealed Çeri Restaurant is indeed a well known breakfast place for locals of the area. We were there on a Wednesday afternoon, however. We shared the restaurant with one other customer, a chef and a waiter.

And eventually, the waiter arrived with a long oval serving plate and placed it on the table between us. We had no idea what the eel would look like. Would it be slippery and slimy? How would it be presented? Actually, what was placed in front of us looked more than tempting.

In west Turkey, grilled fish is always served with simple accompaniments. These were present on our plate; peppery rocket leaves, raw onion hunks and wedges of fresh lemon. We each took a piece of the eel and created a meal with our accompaniments.

White flesh, grilled and crispy; so juicy on the inside. What we were eating resembled a white salmon steak. Wild salmon. Salmon that has built up muscle and fat from swimming in strong currents and cold waters. The eel at Çeri Restaurant was delicious! Another new (for us) food tried in Turkey and another successful outcome.

As we were eating, we saw birds in the distance, swimming from the island opposite and heading in our direction. Could these be some interesting migratory bird or indigenous species? A gaggle of geese. Were they migrating or had they been introduced? We just had the impression that, like the ducks of Duck Island in Fethiye, these geese were more like local pets. And they knew straight where to head to for any potential scraps of food.

It had been a long day. Whilst still in Selçuk that morning, we’d been to Efes Archaeological Museum and the achingly pretty village of Şirince. We’d detoured to Kuşadası – we’d never been to Kuşadası and were curious – for a couple of hours. And now we were at Çeri Restaurant on the shores of Bafa Gölü.

This lake has so much of interest. Despite its ongoing battle with environmental pollution, it plays host to a variety of wildlife in both the animal and plant kingdom. There are treks; low level and mountain hikes in the Beşparmak range. Fishermen take visitors out to the islands on boats, there are organised boat trips, campsites, pensions, bays, monasteries, cave paintings, Hellenistic ruins. Layer upon layer of ancient history.

And us; we were there for just a couple of hours. We took in the scenery, we enjoyed the grilled eel at Çeri Restaurant and we knew we had to come back to see more of this special area. For now, though, time to put the driving head back on and hit the road back to Fethiye…