This time of year is abundant with spring fruits and vegetables, making trips to Fethiye market and Çalış market all the more pleasurable. And now, it is the season for the delightful loquat fruit…

If you read this blog regularly, you’ll know we love to eat and cook seasonally. It’s really not hard to do in Turkey.

The loquat fruit was a mystery to us when we first arrived to live in Turkey and we spotted them on the market.

We didn’t even know what loquats were.

And, of course, they’re not called loquats in Turkey.

If you do see them on the markets, you’ll see labels such as:

Just to add to the confusion, there are also other names for loquat fruit, internationally.

Lots of people know the loquat as a Japaneses plum or a Chinese plum. Even though it’s not even a plum…

Anyway, the loquat tree hails from Japan but has made its way over to Turkey where it now thrives.

And at the moment, their branches are laden heavy with beautiful plump yellow fruit.

We’ve also now got a couple of loquat trees on the site where we live, too.

So, happy days! We get to enjoy this fruit for free.

What Are Loquats Good For?

You can enjoy loquat fruits straight from the tree, just as they are.

If you’ve never had one before, the nearest taste comparison we could make is maybe that of an apricot.

They’re best eaten when they’re plump – in the prime of ripeness and juicy.

On the markets, they might look a bit battered and bruised – they’re quite delicate – but don’t let that put you off.

They’re fine inside. And still sweet and tasty.

There are lots of sweet recipes for loquat out there.

But, obviously, we’re using them the Turkish way. We’re going savoury. And we’re going to make a yeni dünya kebab.

As with ali nazik kebab, yeni dünya kebab is a Gaziantep dish.

If you love the combination of fruit and meat in dishes, you are going to love yeni dünya kebab.

We haven’t got a sweet tooth. But the sweet-savoury combination that features in so many dishes of the Middle East, as well as southern and eastern Mediterranean countries, really works for us.

Loquat – To Oven Or To Grill?

Yeni Dünya Kebab is a real seasonal treat and definitely worth your effort.

You can either oven bake it in a dish like we’re doing in this recipe, or you can make skewers and alternate the lamb meatballs and loquat.

These would be perfect on the barbecue.

Don’t worry if you haven’t got any loquats.

Don’t let that put you off. Apricots or chunks of firm, ripe nectarine or peach will work, too.

If you’re serving your yeni dünya kebab with accompaniments such as flat breads, bulgur pilaf, a side of Turkish rice and a salad such as shepherd salad, this recipe will easily serve four to six people.

And, if you’re entertaining friends, you’ve got to admit, serving it in this way looks pretty special.

First of all, we need to prepare the lamb mince. This is really quick and easy.

We like a bit of extra southeastern Turkish flavour in our Yeni Dünya kebab, so we add a heaped teaspoon of sweet paprika. And the same of baharat.

If you can’t get baharat, you can just use a tiny pinch of cinnamon – not too much or it will overpower the other flavours.

Baharat is a spice mix which you could mix together yourself at home.

Now it’s just a case of kneading the lamb and the spices together so you’ve got an even flavour mix.

Kneading will also make the meat easier to make into little meatballs.

Now it’s time to wash and prepare your loquats.

If they’re still on the stem, remove from the stem and wash them.

If you’re oven-baking them, arrange them in your dish so you know roughly how many you are going to need.

Our oven dish is roughly 27 cm in diameter. The loquats in this photo are medium-sized, so we needed around 35 fruits.

The size of your loquats and how big you roll your meatballs will determine how many fruits you need.

We leave the gap in the middle because we know that will be filled once the loquats are stuffed with meat.

Loquats start to go brown inside once you cut into them, so we’re going to prepare them one at a time and build our yeni dünya kebab as we go along.

We’re going to take one loquat and cut it in half lengthways.

Remove the smooth, slippery stones – there can be any number from one to four – and then the membrane.

This is quick and easy.

Now we’re going to roll a meatball into such a size that it will sit between the two halves of loquat fruit.

Place it in your bowl and move onto the next loquat.

Halve it, remove the stones and the membrane, make a meatball, place it between the two halves, place next to the first one.

And so on, and so-on, until you have filled your dish. As you can see, the space we left in the centre of our dish is now filled.

Once the oven dish is filled, we take a full head of garlic (and more besides, if you prefer), peel the cloves and drop them into the gaps between the loquats.

Decorate the top with some long green chillies and strips of sweet red pepper.

And now we’re almost ready for the oven…

First of all, though, let’s do the make-life-easier ingredients and method for our yeni dünya kebab. 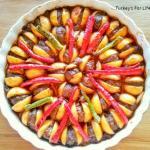 And that’s how we make yeni dünya kebab – or loquat kebab.

‘Yeni dünya’ was the first name we ever saw this fruit named as on Fethiye market. So, for us, that’s our natural household name for them.

We put our kebab on the top shelf of the oven at 200 degrees Celsius first of all, just to get everything sizzling.

The next 20 minutes on the middle shelf of the oven at 180 degrees is where everything cooks through, slowly.

You will end up with a sticky gravy from your nar ekşisi (a syrup from pomegranate molasses) and fat from your lamb.

Last time we made this, we served it with warm flat breads and a side of baba ganoush.

As with so many other dishes we write about, I’ll add the inevitable – and true – sentence. This is one of our favourite Turkish recipes.