If you like ‘cooking light’ then look away now. A Gaziantep ali nazik kebab is spicy, rich and buttery.

At the same time, the aubergine and yoghurt bed that the meat is laid on is smooth, smoky and creamy.

From The City Of Gastronomy

At the time of writing, we have still never been to Gaziantep. Various obstacles have presented themselves.

But, when we do get there, we know we’ll return home to Fethiye a good few pounds heavier.

It’s no accident that Gaziantep is recognised by UNESCO as a City of Gastronomy. Famous for sweet dishes such as baklava and katmer, its savoury foods are also equally revered.

Meat kebabs galore – including ali nazik kebab – with the meats marinaded and tenderised in various spice and fruit mixes.

Molasses and spicy pepper and tomato pastes that are used to flavour breads, salads, soups and main dishes.

And let’s not forget the gift of pistachios. The Turkish word for pistachio is Antep fıstığı (Antep nut).

So, that’s just a very brief peek into the gastronomic window of the place where ali nazik kebab comes from.

A cuisine that spans centuries and that has been influenced by so many regions throughout this time. And yet, ali nazik holds its own and is so loved that it is known all over Turkey.

Making Our Yoghurt Aubergine Base

Those of us who love aubergines, especially love the flavour of roasted aubergine. We roast our aubergine for ali nazik kebab. But you can also char it over a naked flame if you prefer.

The oven is more convenient for us because we roast peppers at the same time and use the heat afterwards for our plates and yoghurt base.

Our yoghurt base is actually very similar to our baba ganoush recipe. Roasted aubergine and yoghurt combined is just divine.

Once the aubergine is cooked and cooled, we peel away the skin and chop up the flesh.

This is then added to our yoghurt mix and placed into the oven along with two plates. We do this because we want the base to be slightly warm when we’re ready to serve.

A traditional ali nazik recipe will use cubed lamb (kuşbaşı) for the topping. These days, however, minced meat is commonly used.

We prefer the minced version. But you can, of course, use cubed if you like.

We love a spicy topping! And you can get a away with a good dose of heat because the yoghurt base cools the spice.

When you’re frying your meat topping, don’t worry about those juices. You’re going to be using them to drizzle over the top when you serve.

The reason our yoghurt aubergine base and plates go in the oven is because we don’t want the yoghurt base to be served cold.

Divide your yoghurt aubergine mix between the two plates and spread it towards the edges. Then you can serve your meat over the top.

Any juices left in the pan can be drizzled over the top of the meat and allowed to flow over your yoghurt.

If you really want to go for it with the extra juices, just like with Iskender Kebab, you can heat some butter in a pan. Then drizzle it over the top of your ali nazik kebab.

We also like to sprinkle some freshly chopped parsley over the top of ali nazik before serving.

You might also have noticed the roasted red pepper, too.

If you like roasted pepper or onion, you can add these to the oven with your aubergines at the beginning. Then just serve them on the side, later. 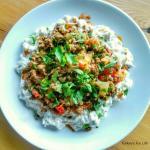 For The Meat Topping

For The Yoghurt Base

For The Yoghurt Base

For The Lamb Topping

And that’s how we make ali nazik kebab – pure indulgence on a plate.

Enjoyed Ali Nazik kebab today from your recipe (apologies to Ozlem whose recipe differed slightly).As not able to spend our 34th year in Turkey (Kayakoy in May/June;Bitez Sept /Oct we are doing our best to compensate.Haven't resorted to the Raki yet,which sits behind me and we are lucky to be able to buy many necessary ingredients from Turkish online supermarkets in London.Will be devastated if we can't get there in May 2021 for special anniversary. Nb-recipe was çok iyi.

hi Tony, thanks a lot for your comment and really glad you enjoyed the Ali Nazik. It's a favourite for us, too. :) Hope you get to come over to Turkey in 2021. So much disruption and disappointment this year. Enjoy that rakı! :)