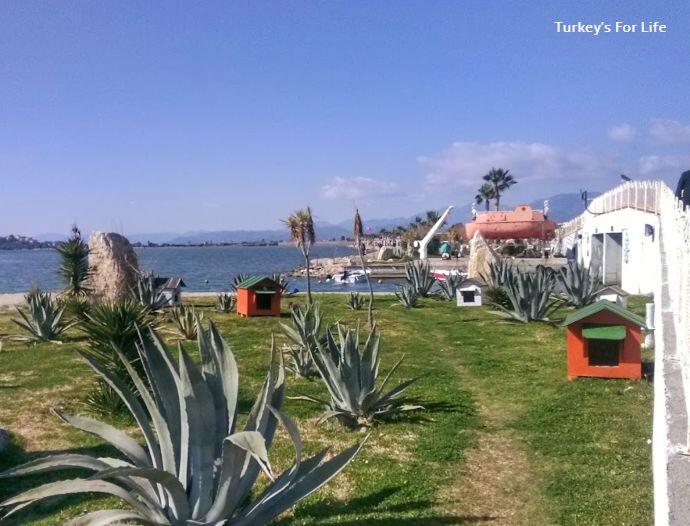 Month Two of 2021 has come to an end. So it’s time to have a look at what’s been going on around Fethiye – and what we’ve been getting up to – with our monthly Fethiye news update.

Despite the fact that there are still weekend and evening curfews, along with other Covid restrictions, Fethiye life feels like it’s starting to pick up a bit of pace.

Certainly, the belediye (Fethiye Council) are at full steam ahead with all the projects they have on the go at the moment.

So, let’s have a look back at February…

We’re starting with the penultimate day of February with the Şehit Fethi Bey commemorations.

Fethi Bey was a pilot during the Ottoman era and 27th February marks the anniversary of his death when his plane crashed.

In previous years, we’ve had big events where airforce jets and other aircraft have done a flyover and there’s been a gathering at the statue of Fethi Bey.

This year, well we all know the score.

We did have the pleasure of paramotors doing a short flyover in formation across the bay.

And there was a small gathering of personnel at the statue of Fethi Bey. His statue is now in the park that also bears his name.

You can find out more about the park and the man from whom Fethiye takes its name in our article about Şehit Fethi Bey Parkı.

Incidentally, the poor statue took a battering during a storm in the New Year.

The wings didn’t stand the storm and one crashed down into the marble plinth, smashing parts of it.

Perhaps with upcoming commemorations in mind, the broken marble was quickly replaced. Whether the wings make a return remains to be seen.

We guess safety may be a consideration, here.

Locally, aside from the topic of predicting when curfews and other restrictions may or may not be relaxed, the Çalış Beach facelift is oft discussed.

‘Facelift’ is a bad phrase, actually. It’s not just about making the promenade look pretty.

This has been an exercise in the improvement of infrastructure, too. So, much of the digging of trenches has been for water pipes and various updated cables.

As you can see in the photo above, a path along the length of the whole promenade how now been concreted.

One small area, further along, has been dug up again where there’s clearly a problem – but no doubt that will get sorted soon.

In the meantime, though, life is suddenly much easier when trying to take a walk along the beach.

No more clambering over mounds of rubble.

At the moment, the main concentration seems to be on the wall which separates the beach from the promenade.

This is being reinforced and is both wider and higher. There are slats in the wall where we assume lighting is going to embedded.

At the bottom end of the beach, near Yasemin Hotel, where the wall reinforcements first started, the construction team are now starting to lay a wooden frame along the foot of the wall.

We’ve put a photo of that in our Instagram Stories, today and will continue to update via that social media channel.

All the photos can be seen in the dedicated ‘Highlights’ in our Instagram profile page.

As you can see in the top right photo of the collage, the row of bars/restaurants that includes Calisto Pizza now has a small roof terrace. Should be nice for a bit of sunset viewing.

February is the month where we can start to feel a little bit of a coming-out-of-winter mood lift.

The weather in  Fethiye hasn’t actually been very wintery, this year.

But it’s still always so pleasing to see the first almond blossom appear on the trees.

A first sign that the change in seasons is not too far away.

This is the almond blossom that is currently in bloom in our garden. Juıst across the road, we have a group of mimosa trees and they are also in bud.

After the year we’ve had, the sunshine yellow of the mimosa is going to be such a welcome sight!

As well as the big beach project, the belediye have also been busy with lots of other projects.

The outdoor pazar (market) at Patlangıç is getting a roof and solar panels are going to cover the roof.

As for the street dogs and cats of Fethiye, for the past few months, the council have been creating feeding stations where the animals can get food and water.

These are topped up intermittently.

A short while ago, this group of kennels was also placed at one of the feeding stations by the bridge that goes towards Fethi Bey Park.

We haven’t seen them being used, yet – but it’s nice to think there’s a bit of shelter for the dogs or cats in this area, should they need it.

As far as new Turkish recipes are concerned, February saw us move away from our comfort zone.

From our first love of all things savoury, we ventured back into the world of famous Turkish desserts.

Of course, they’re Turkish desserts that we love to eat so it wasn’t a case of making these just for the sake of it.

Barry’s mum has a sweet tooth, too, so she’s always a grateful recipient of the spoils when we’ve made enough food to feed an army!

The famous Turkish pudding dish, sütlaç, is now in our collection. Such a bowl of comfort.

And we also updated our recipe for another of our favourites, revani.

If you love zesty flavours in your sponge mixtures, give the revani a go. Lovely!

And Some Of The Usual Favourites

February is the month where, of course, Valentine’s Day happens. This year, it fell on a Sunday which was a curfew day.

So, an extra nice treat of a meal at home. We bought some meaty lamb steaks and served them with a homemade Gavurdağı Salad – a perfect partner for lamb!

And, hurrah, we surpassed 6,000 followers on Instagram in February. We’re quite pleased with this.

There are lots of things you can do on Instagram to give your follower numbers a good boost.

So, thanks a lot if you do follow us over there.

Sometimes, our disorganisation in getting these monthly updates out on time – or not – pays off. Last night – March 1st – the government announced the outcome of their latest meeting re: the restrictions in place during the current pandemic.

We’re not gonna list everything here because a lot of it doesn’t relate to this blog.

Each province in Turkey has been placed into one of four risk groups depending on case numbers.

Because of the ‘risk group’ that Fethiye (and its wider county Muğla) falls into, amongst other decisions that have been made, our weekday night time curfews from 9 pm – 5 am remain in place, as does the Sunday curfew.

That means we are now free to play out on Saturdays until 9pm! Hurray. An extra day where we can go out for a run or a longer walk around Fethiye.

And, one thing we have very much missed of late – local restaurants and cafes etc can now open at 50% capacity until 7pm.

Not everywhere will open straight away (some will wait for summer season and some will continue with takeaway for a while) but for the ones who were champing at the bit to open their doors this morning, very best of luck to all of them!

Soooo lovely to see the stream of posts on social media from local businesses saying ‘We Are Open!’