Foods associated with Christmas? Surely one of the first foods that pops into your head is traditional mince pies?

And, as far as we’re concerned, homemade mince pies are the best!

Everyone has their own little additions and tweaks that makes their mince pie recipe special to them. And to the people they share them with.

Things have changed a lot over the years. We now have the Çalış Christmas Fair, for example.

Making Our Own Fun

But when we spent our first Christmas in Turkey – a predominantly Muslim country – many years ago, we realised we would be making our own Christmas fun.

It was time to get inventive.

No mince pies in the supermarkets, of course. And it’s just not Christmas without mince pies.

Time to take myself back to childhood days. And memories of helping with my nana’s homemade mince pies.

Since then, my own mince pie recipe has been tweaked, developed, made up as I’ve gone along.

The one constant to the mince pie recipe? They just have to be star-topped.

For no reason other than a star was the only remotely festive pastry cutter we could find all those years ago. It worked well. And now it’s tradition.

And Christmas is all about tradition for us. So that also means a mince pie recipe with shortcrust pastry.

For mince pie recipes with a twist, however, we will also be experimenting with yufka (filo pastry) for Christmas 2021.

But shortcrust pastry will always be the star attraction.

The big plus point of homemade mince pies in Turkey is it’s easy to buy your ingredients for your mince pie filling.

A visit to one of the dried fruits and spices stalls of Fethiye Tuesday market or Çalış Sunday market and you can buy all of your staples in bulk.

We buy a lot. And we try to buy them in November so that I can make the mince pie filling. And also, so Barry can make his winter chutney, too.

We can even get inventive and choose a few extra ingredients.

There are no hard and fast rules to what makes the best mince pie recipes. It’s all about personal choice.

Of course, the currants and raisins and fresh apples are always needed. But after that, we like to play around.

The zest of oranges and lemons, too, for a bit of festive flavour for our mince pies.

A few toasted pine nuts? Why not?

Oh, and we do go boozy. A good splash of brandy will be going in there.

Depending on when we get round to making our mince pie filling, we add a drop more brandy to the mixture once a week or so.

All In One Pan

Once we’ve got all of our mince pie filling ingredients together, all we need to do is put them into a large saucepan.

As well as our dried fruits and fresh fruits, we’ve got brown sugar. We’ve also got comforting Christmas spices.

Our homemade mince pies have a hint of cinnamon, clove, allspice. And also star anise. All those warming flavours, full of festive spirit.

And you might have noticed something else in the pan, too….

Cubes of butter. This is a no suet mincemeat.

We could go to our local butcher and ask if they can arrange some suet for us to make our mince pie filling.

But, quite honestly, the butter works just as well.

We’re going to heat our mincemeat for our mince pie recipe on a low light and stir it around for 15-20 minutes.

After that, we leave it to cool. And then it’s ready to jar up until we’re ready to make the mince pies, themselves.

Do all mince pies contain suet?

No. Our mince pies are made without suet. We prefer to use butter. This means our vegetarian friends can enjoy them, too.

What are mince pies filled with?

Mince pie filling is often known as mincemeat. In the past mince pie recipes actually contained actual meat such as beef or lamb as one of the ingredients.

These days a typical mince pie recipe has dried fruit, fresh fruit, sugar, brandy and spices such as cinnamon and cloves as the main ingredients.

How long does mincemeat last for?

We add brandy to our filling. Our mincemeat for our mince pie recipe will last for a year if stored in a sealed jar in a cool dark place. The brandy will help to preserve it.

In the past, we have made a lot of mincemeat and used it two years in a row for our mince pies.

Can I freeze mince pies?

We make our mince pie filling in advance. Then we make the actual pies a couple of days before Christmas Day so they’re nice and fresh.

If you want to make the whole mince pies in advance, however, you can bake them and then freeze them in an airtight freezer-safe container for up to three months.

Thaw in the fridge the night before you want to eat them.

What is the tradition of mince pies?

We love our little star-topped, rounded mince pies but they actually used to be rectangular in Tudor times. According to Historic UK, the pastry casing represents the manger of the baby Jesus.

Some pies would have a pastry baby on top, too.

In the Middle Ages, there was a tradition where people would eat one mince pie every day from Christmas Day to 12th night on January 5th. It was believed this would bring good luck for the year ahead.

And these days, in the UK, mince pies are left out by the fireside on Christmas Eve so Santa Claus can have something to eat whilst he places the presents under the tree.

And us adults? Well we just eat our way through more mince pies than we’d care to remember!

How To Make Mince Pies

Let’s get started with our mince pie recipe.

It’s a recipe in two parts. First of all, we’re going to make the mince pie filling in advance.

And then, just before Christmas Day, we’ll make the shortcrust pastry and create our mince pies.

It was very recently that we decided the shortcrust pastry I’d made for the mince pies was the best yet. Fortunately, I remembered to write it down so that we now have a ‘go-to’ recipe.

A generous sprinkling of orange and lemon zest into the dough makes for a pastry with a hint of citrus flavour.

And the star shaped lids with their dusting of snow (icing sugar) gives the perfect festive feel. 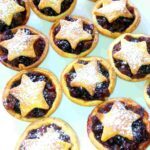 This Christmas mince pie recipe is in two parts. First of all, you need to make your mince pie filling in advance. You can do this months before to allow the mincemeat to mature but don't worry if you forget. The mincemeat can be made a few days before you need it, too.We make our shortcrust pastry and create our mince pies either on the day we'll be eating them or the day before. For this mince pie recipe, you can make the pies up to one week in advance and store them in an airtight container in the fridge, if you like.
Course Snack
Cuisine British
Prep Time 1 hour 20 minutes
Cook Time 40 minutes
Total Time 2 hours
Servings 12 pies
Calories 220kcal
Author Turkey’s For Life

For The Mincemeat Mince Pie Filling

For The Shortcrust Pastry

For The Mincemeat Mince Pie Filling

For The Sweet Shortcrust Pastry

Once you have perfected your own mince pie recipe, we’re sure you won’t go back to buying them from the supermarkets.