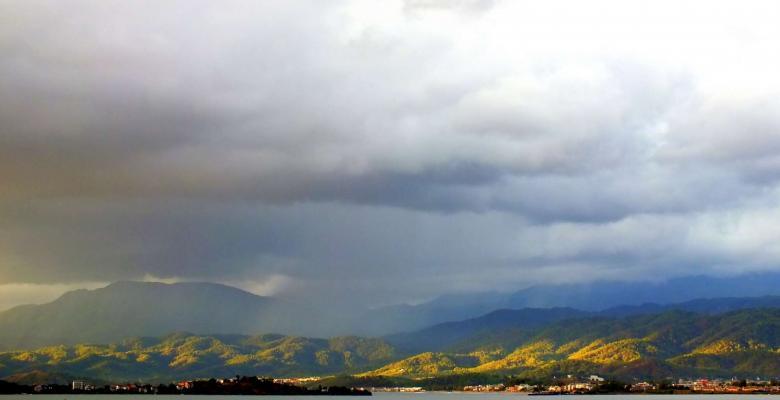 Yes, it’s that time again where we look back on another month that’s passed in our monthly news roundup. The penultimate month of the year, at that!

November is the month where we commemorate the death of Atatürk, founder of the Turkish Republic on the 10th.

We commemorate Remembrance Day on the 11th. And Turkey celebrates the hard work of the country’s teachers on Teachers’ Day on the 24th.

Around all of that, daily life in Fethiye has continued…

If you keep up to date with the weather in Fethiye, you’ll know we’ve pretty much had a mild and sunny November.

As the month was coming to an end, we finally got some much needed rain.

The torrential downpour unleashed on us wasn’t too welcome, especially for the businesses that flooded. But a little bit of steady rain is most welcome.

And there’s still lots to do in Fethiye when it’s raining.

We need a lot more of the same, as does the rest of the country.

The final two days of the month saw weather warnings for pretty much the whole country in the form of high winds. Poor Istanbul bore the brunt with much damage and the loss of five lives.

Compared to the scenes from Istanbul and places like Bodrum, we got off quite lightly, here in Fethiye.

Autumn is associated with falling leaves and life slowing down, here. Thankfully, nobody tells that to the seasonal produce.

In November, the stalls of the markets are piled high with seasonal treats. So we can hit the kitchen and shift our focus from summer meze to more substantial, comforting dishes.

Definite favourites that are much looked forward to are cauliflower and broccoli. Both are so versatile. We use them for Turkish recipes and for general experiments in the kitchen, too.

With regards broccoli, potato and broccoli soup is often on the menu since we decided that soup season had kicked in (despite it being a bit too warm at the time).

This year, we’ve been adapting the soup recipe sometimes, too. A sweet potato rather than a plain potato. A good dose of turmeric – both healthy and colourful.

And then the flavour and the texture of the moment. Who doesn’t love a few fried halloumi ‘croutons’ to garnish?

As for cauliflower, we love it roasted in the oven. And also in a stew as karnabahar yemeği.

Obviously, we use both cauliflower and broccoli in lots of other recipes from around the world. Curries, bakes, stir fry dishes.

I’ve also been playing around with a version of mücver, too, using both vegetables. Recipe yet to be perfected.

Ahhh, and then there’s the arrival of hamsi season in November. The stalls of the fish market in Fethiye have already tempted us into our first purchase.

Nothing fancy for that first hamsi experience of the season. Straight in with the ‘tava’ version.

We’ve got the rest of winter to enjoy our favourite hamsi recipes and experiment with more.

And Much More Besides

Brussels sprouts and chestnuts are being harvested.

We’ve had one hit of saffron milk cap mushrooms – çıntar – and used them to make garlic mushrooms on toast.

The rain this last few days should mean we get the opportunity to buy more çıntar at the Çalış Sunday market, this weekend.

We’ve had some lovely sunny days throughout November. At the beginning of the month, we were supposed to be in Istanbul for the Istanbul Marathon.

For lots of different reasons, we ended up having to knock that on the head, unfortunately.

The lack of a little Istanbul break gave us the opportunity to treat ourselves here at home in Fethiye.

A little bit of eating out and a perfect opportunity to update some of the restaurant reviews on our Fethiye restaurants and bars page.

First up was Calisto along Çalış Beach. We got there often for a drink but hadn’t had a pizza for a while.

A sunny autumn day by the sea with a pizza – nice! Our article about Calisto and its pizza is now up to date.

Çarıklı Restaurant is our favourite place to go for a steak. And this was our big treat in November.

It’s a winter place for us so we hadn’t been for a couple of years because of lockdowns last year. The meal was so lovely!

There’s a lot of updating to be done on our Çarıklı article. We wrote about when it first opened in 2016 so a few changes have been made since then.

Needless to say, the steaks are still fabulous!

We’ll be working on that article this month…

It’s not all been about bars and restaurants. We’ve been running. And we’ve been wandering, too.

We ventured our for a longer Fethiye stroll, too, in November. A good leg stretch around the Fethiye peninsula.

New On The Blog

As well as updates and lots of background work, we’ve managed to add some new articles to the blog in November, too.

If you’re an aubergine fan – we love them – we collected all things aubergine together and compiled our list of Turkish aubergine recipes.

This is not a be-all-and-end-all list. As we add more aubergine recipes to the blog, they’ll be added to this already comprehensive list.

Bonfire Night in the UK prompted our twice-baked potato recipe. A regular in our house.

And, with Christmas in mind, now, we’ve shared our recipe for homemade mince pies and homemade chicken liver pate.

We know chicken liver pate isn’t exclusively Christmassy. We eat it year round. It is a good Christmas spread, though.

Well, as for Fethiyespor, they are going from strength to strength. And there lots of happy Fethiyespor supporters as the wins and the goals continue to clock up.

Dare we start to think of being 2. Lig next season? A home match against friendly rivals Karşıyaka tomorrow – always a great atmosphere when these two teams meet.

Being from Wigan – the town of Wigan Warriors fame – of course, we’re rugby league fans. So we’re very excited about this.

Rugby League is growing in Turkey but teams tend to be around Istanbul, Eskişehir and Izmir.

It’s great to see Fethiye getting in on the action and bringing rugby league to the southwest.

They’ll be playing on the football pitch in Günlükbaşı and have already made some signings.

Their hope is to get kids interested and involved in the game, too. And grow the game in this area.

Keep up to date with developments via the Fethiye Falcons Facebook page.

And, if you didn’t know about rugby league in Turkey, give the Turkish Rugby League Association Facebook page a like, too.

Into The Final Month Of The Year…

And so into December. We’ll be feeling festive from the weekend onwards.

The Christmas tree will go up. And we’ll have the Çalış Christmas Fair to get us into the spirit.