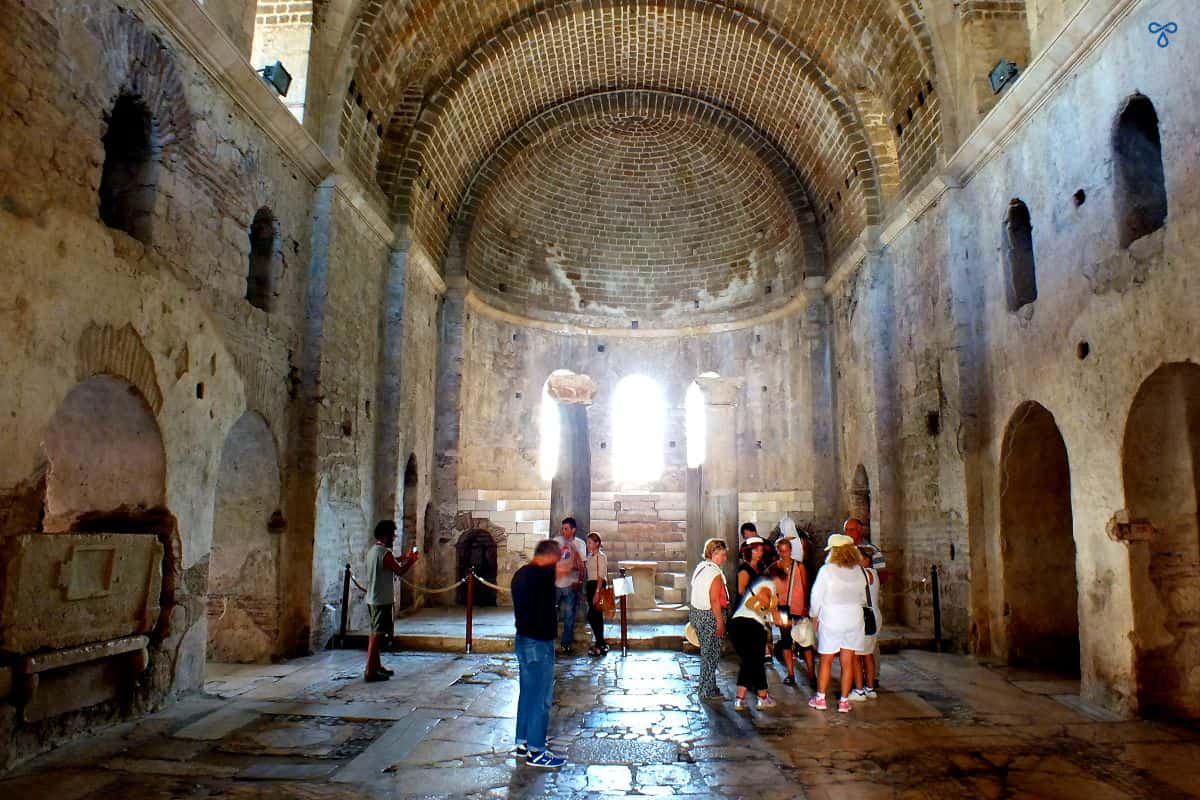 Father Christmas, Santa Claus, St. Nicholas – whatever name we assign to him (and in the UK, we do fluctuate), we all know who he is, don’t we? He’s that big jolly man in the bright red suit, big black boots and a fluffy white beard.

He’s busy in Lapland for most of the year, getting the toys ready to go into his sack so that Rudolf and the rest of the reindeer can carry the toy-filled sleigh to the children of the world each Christmas eve.

Most of the time, whilst the children sleep, Santa Claus will climb down the chimney of each house to fill stockings, leave toys under the tree. And, of course, he might just indulge in a mince pie or two washed down with a glass of sherry.

Who Was The Real St. Nicholas?

Naturally, into the future, as he’s always done, Santa Claus is going to continue doing his annual rounds of the world’s chimneys from his home in Lapland, filling stockings en route… But who was the real St. Nicholas and where do all of our little Christmas traditions originate; the gifts, the chimneys, the Christmas stockings?

From this man; St. Nicholas of Myra. The legends and traditions around Christmas that we are so familiar with today all come from a man who was born in Patara to a wealthy family and, at a very young age, became the bishop of Myra; today’s Demre in the Antalya region of Mediterranean Turkey.

Today, St. Nicholas Church in Demre is a museum where, throughout the year – summer, in particular – millions of people visit the Lycian, Hellenistic and Roman ruins of Myra and the church. We visited a few years ago in winter and had the place almost to ourselves.

But, on our recent return visit, it was the end of the summer season and we were there as part of our Kekova to Kemer gulet cruise; the place was packed.

Not packed with tourists; ‘tourists’ is the wrong word. Most of the visitors who were there on the same day as we were are better described as pilgrims. Whenever we travel anywhere in Turkey, it’s usually out of season (more by good luck than good management).

We often feel fortunate to have ancient sites like Datça’s Knidos, Patara and Myra to ourselves, just to soak up the atmosphere in blissful isolation.

We had that same experience on our first visit to the church of St. Nicholas. But our more recent visit was a completely different type of experience.

Yes, we were sharing a small space with hundreds of other people (the church of St. Nicholas is humble in size compared to other Byzantine churches in Turkey).

But the vast majority of those people – those pilgrims – were Russian and they were here to visit the statue, the church and the resting place of their greatly revered saint, St. Nicholas.

We only realised the importance of St. Nicholas in Russia on that day of our most recent visit. The vast majority of women who entered the site covered their heads and shoulders with scarves before entering.

A visit to a museum for us – to see he who is responsible for the legend of our modern day Santa Claus or Father Christmas – was a pilgrimage to a sacred place for them.

At the bronze statue of St. Nicholas, just outside the church, a constant queue of people polished his foot and kissed it (see how his foot is glistening in the top photo) and had photos taken of themselves with the statue in shot. At the tomb of St. Nicholas, people peered through the protective glass and knelt and prayed.

We’re always conscious of, and respectful of, the fact that when we visit mosques in Turkey, we are in a place of worship.

We know now that it’s the same for St. Nicholas Museum. In Demre, road signs will read ‘Noel Baba Müzesi’ (Father Christmas Museum), and it is a museum, but just be aware that if you do visit here, this is sacred ground for many.

St. Nicholas And The Traditions Of Christmas & Santa Claus

After leaving Patara for Bethlehem to study with monks, the young Nicholas apparently returned to find his parents had passed away in a local epidemic and had left him with an inheritance of a considerable sum.

Rather than keep this to himself, he chose to give it away to those in need – but he did this quietly so as not to draw attention to himself or to those who were receiving his charity. Well, we can see a bit of a Santa link, there, can’t we?

Another legend of St Nicholas standing up for the disadvantaged is when Myra was suffering from famine. Andriake harbour – today’s Çayağzı in Demre, and the harbour where our gulet anchored – was a major stopping point for ships carrying goods.

A ship en route to Egypt was carrying grain when it stopped at Andriake and Nicholas of Myra asked those on board for sacks of grain.

It appears stock control was the bugbear of many, even in those days, as the crew of the ship explained the request was impossible to meet because all the grain was carefully measured and the powers that be in Egypt would know some was missing.

Nicholas persuaded the crew to offload some foodstuffs to feed the hungry of Myra and guaranteed this wouldn’t be noticed upon arrival in Egypt.

The legend goes, the people of Myra were fed, and, when the ship arrived in Egypt, the full stock quota was still as it should have been.

No doubt Andriake harbour looked a tad different in the days of St Nicholas of Myra (no tarmacked road carved into the contours of the hills for a start) but to arrive here just after sunrise on our gulet cruise, on flat calm waters…just another memorable part of our little Lycian adventure.

So we know the bishop of Myra was a generous type who looked out for people and protected them. Now what about the chimney and stockings situation?

Isn’t it just truly fascinating how historical facts, tales, legends and traditions intertwine so that, even throughout Europe, our Christmas traditions become similar yet different, based around the stories of St. Nicholas.

Stockings and chimneys for instance. Why do we hang stockings at Christmas and why does Santa Claus slide/clamber/tumble (what does he do?) down our chimneys to leave gifts? Well, there’s a St. Nicholas legend (nay, legends) around that, too…

The general tale, with its variations, is that a man and wife lived with their three daughters. Sadly, the wife died and, subsequently, the father fell on hard times. When the eldest daughter reached marrying age, there was no money for a dowry and the father was worried his daughters might have to resort to prostitution.

Nicholas was having none of this, and, knowing the father would be too embarrassed to accept the dowry money, he put the money in a small sack and, in the dead of night, dropped it down the chimney.

It just so happens (here’s coincidence for you) that the three young girls had hung their stockings over the fireplace to dry and the sacks of money landed in said stockings, once they’d fallen down the chimney.

Other variations include St. Nicholas actually climbing down the chimney to place the money into the stockings, secretly. Now, there’s a recognisable Santa Claus link, for you…

How important can you get as a saint? St. Nicholas is said to be patron saint of more causes than any other saint out there.

As for Demre, aside from the coachloads of people who are brought in from the Antalya resorts to visit Myra and St. Nicholas Church, the town mainly continues as a tomato-producing area, largely unaffected by tourism.

This street, where the museum is, hosts a handful of souvenir shops and shops selling ornate religious icons. But if it wasn’t for the tell-tale summer coaches and a few brown signposts, you wouldn’t know these significant pieces of history were here.

That’s always the fascination of Turkey – as with the ruins at Xanthos, modern daily life and ancient history exist not just side by side, but weaved and intertwined, impossible to separate.