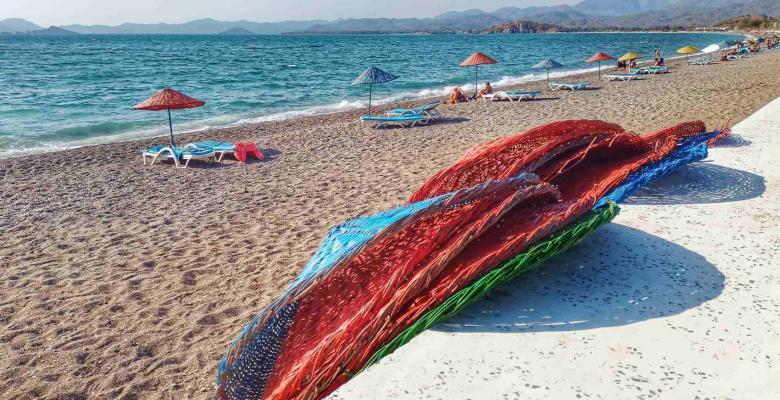 Yes, whilst the October Fethiye weather is still sunny and warm and the sunbathers and boat trippers are still enjoying the last throes of summer, this is the month where we dare to feel cosy and autumnal.

A few downpours and cloudy skies amidst the sunny blue skies have helped to cement that feeling.

And, of course, the beds and umbrellas from Çalış Beach being put into winter hibernation tells us that the change of seasons is most definitely upon us.

So, with the cooler weather, and the change in seasons in mind, let’s take a look at our Fethiye news update from the past few weeks…

We get lots of comments from people saying they wish they could be around for some of the many Fethiye events that take place throughout the year.

If you’re one of those people, autumn and spring are the seasons you need to be in the area. Summer is for the outdoor beach parties and barbecues.

It’s just too hot for much else.

The big event of October – at least for us – was the International Ölüdeniz Air Games.

Cancelled last year for obvious reasons, this year’s event was much anticipated. Especially when it was announced Türk Yıldızları (Turkish Stars) would be doing an air display over Çalış Beach.

We were due to go over to Ölüdeniz on the Saturday. Until we looked at the programme of events.

There was going to be a paramotor display along Çalış Beach. So we headed to the beach to watch those guys glide up and down the shoreline.

As an added bonus, Türk Yıldızları were doing a bit of a dummy run that afternoon, too. So we got a sneak, not very crowded, peek into what we would be witnessing the following day.

And the following day was certainly no disappointment.

Never have we seen so many people crowded along the promenade at Çalış Beach.

Naturally, some of us are still trying to avoid areas that are very crowded. So we made our way further along the promenade where there was more space.

Parked outside Calısto, we had access to the bar, clear blue skies and the long awaited return of the famous Turkish pilots doing their air display.

After the last 18 months, it was just the day that Fethiye needed. And, after an earlier forecast of cloud and rain, we were blessed to have the bright sunny day we all wanted.

And the gatherings and feel-good factor didn’t stop with the Air Games. 29th October is Cumhuriyet Bayramı – Republic Day in Turkey.

Well, we did say October was a busy month for the town.

Earlier in October, we had famous Turkish rock singer, Haluk Levent, performing in the town square with the Russian Red Army Choir.

On the 16th of the month, off road vehicles were displayed in the town square. The following day, they were taking part in the first leg Akdeniz Offroad Kupası (Mediterranean Offroad Cup) at Fethiye’s Esenköy offroad track.

And, for tennis fans, we had the Lycian Cup, played at the tennis courts in Çalış. This was a men’s amateur event with 55 players taking part.

What Day Is It?

There’s a national or international day for everything now, isn’t there?

We could fill a calendar with them!

And, whilst we don’t want to get caught up with following all these special days, October threw up three which lent themselves nicely to the blog and what it’s about.

It’s been a busy month for events and general daily comings and goings. So we don’t have any new places to tell you about. Or add to our places to eat in Fethiye list this month.

It’s been about meetups with friends at Calisto along Çalış Beach. And Gustorante along Yerguzlar Caddesi.

Gustorante has had a facelift And they now have a new menu, too. So that article will also be updated soon…

We look forward to the beginning of autumn for seasonal eating. The vibrant colours of the fruits and vegetables on the markets are so tempting.

Pomegranate season is upon us. The sunshine colours of the citrus fruits contrast against the vibrant greens of broccoli and spinach.

And the cauliflowers are plump and white.

And let’s not forget the autumnal oranges of pumpkin season. In October, we added the famous Turkish pumpkin dessert to our recipe collection.

Moving over to our comfort zone – savoury foods. We also shared our recipe for ekşi balık; a zingy lemony fish stew. This fish stew is a current favourite in our house.

And autumn, even if the weather is still warm and sunny on most days, heralds the start of soup season.

As I type, there is a pan on the hob containing last night’s leftovers of potato and broccoli soup. An amazing colour because I added a good dose of turmeric to it.

Pumpkin goes a long way. So when we made our dessert, we also made a big pan of pumpkin soup.

And, of course, first soup of the season always has to be spicy red lentil soup!

What to say here?

Fethiyespor are absolutely smashing their way through the first half of the season.

So well are they doing that last week the team were third in the list of clubs with the most goals throughout Europe. Third behind Ajax and Bayern Munich!

Whilst all of the above has been going on, the belediye (local council) have been busy asphalting the roads of Fethiye.

If you live or holiday on a street that is currently a dusty track or just in a terrible state, they could be en route to you soon.

We’re anything but celebrity spotters but…

If someone chooses to go on holiday and they happen to choose the Fethiye area, they chose well. Job title or celebrity status ıs irrelevant.

But for October, we’ll wish a speedy recovery to British actress Sarah Parish who had a nasty fall and fractured her back while holidaying here.

And, yes, guess we all know the news that Bill Gates and Jeff Bezos have been holidaying in the area on their yachts.

Jeff Bezos is said to have helicoptered to Bill’s yacht (anchored at Büyük Boncuklu on the Fethiye peninsula) to celebrate Bill’s birthday.

Like we said, they have good taste in choice of destination.

As do all the other people who have given the Fethiye area – and other regions.

A much needed late summer tourism boost throughout October and into the first part of this month!

That was October. Let’s see what November brings…