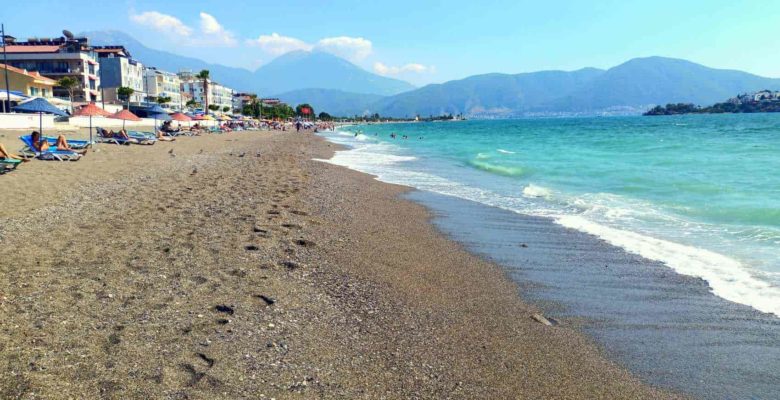 Well, not seeing off the summer completely because our September – and lots of October – will be jam-packed with friends coming to Fethiye on holiday.

But August is usually the month where we plough through and see off the last of the intense summer heat.

Unlike July, which was a dry heat and saw the banning of barbecues at times, the humidity descended for August.

But we did have some respite by way of a few days cloud. And even a few spots of rain on one day.

And whether it was caused by the mixed bag of Fethiye weather or not, mid August, as we walked along Çalış Beach, we were treated to a sight of beautiful turquoise waters.

August is the month where we get one of the country’s national holidays, Zafer Bayramı.

This year’s Zafer Bayramı (Victory Day) was the 100th anniversary.

It was marked in Fethiye by the usual display of flags, a live concert by Ceylan Ertem and a people’s walk along the kordon to Beşkaza Meydanı (the town square).

A few months ago in a previous news round up, we told you about the closing off of the little area where the Zabita and kiosk cafes were along the promenade at Çalış Beach.

We’re not sure why this became a summer project…

But anyway, all is now revealed. And it looks really pretty.

Much better than it did before when the shops and food places were almost hidden by an ice cream cafe.

At the moment, all these units are empty. What they’ll be, we don’t yet know. No doubt we’ll find out soon enough.

For now, we’re just enjoying the vibrant pinks of the bougainvillea which has been planted there.

A day for everything and anything…

And aubergines are no different. August 17th is the day we celebrate Eggplant Day.

As we grew up in the UK, this tasty vegetable (that is apparently actually a fruit) is of course better known to us as the aubergine.

There’s not really much call for a reminder to celebrate the aubergine (patlıcan) in Turkey as it is such prominent feature of many Turkish recipes anyway.

We acknowledged the day by sharing our list of Turkish aubergine recipes.

Ahhh, yes, the Fethiyespor season is once more upon us.

We kicked off the first match of our new season in 2. Lig with an away loss to Zonguldak!

A 4-2 loss. Ah well, onwards and upwards from there.

The first home match is this weekend against Van Spor. And, naturally, everyone is hoping last week was just a bit of a blip. A few teething problems.

Here’s the fixtures for the first half of the 2022-23 season, up to New Year. Here are the current league standings, too – if you don’t mind looking at a not very happy sight.

We’ll do the second half of the 2023 fixtures later in the season as they have a tendency to change at this early stage.

We know the weather’s cooling down to more reasonable temperatures when we start to discuss meals and some of them include ingredients that require cooking!

Appetites are returning and we’re looking forward to an autumn and winter of cooking again.

Throughout much of August, though, it’s been about light dips and salads.

A rather large bowl of carrot and yoghurt dip lasted a few days and made an appearance on the table numerous times.

Piyaz is a great summer dish because we love it with homemade köfte so that means we get some warm meat inside us.

Lunches have consisted of simit with various (often too many) Turkish breakfast ingredients.

The local fish monger had some smoked trout in the fridges so smoked trout pate saw us through a couple of lunches.

And, more recently, through the cloudy spell, the oven was brought back into the fold. Barry made his ekşili balık – lemony sour fish stew.

That was the main clue that we’re over the worst of the summer heat.

August was as quiet as July for us, really, as we’ve been waiting for our September friends to arrive.

We managed to catch up with some friends at Gustorante for drinks. And then the end of the month was about as rock n roll as we got.

First it was a wander along Çalış Beach on (UK) Bank Holiday Monday for a pub lunch of scampi and chips at Lukka.

And then the end of the month was a breakfast get together for a friend’s birthday at Denizatı Restaurant along the harbour.

The menemen was a popular option as it’s served with chips!

I went for the mixed sucuk and cheese panini (karışık tost), though – also served with chips.

As this was a group of people from circuit training class, I guess we all thought we deserved the breakfast chips!

One new article on the blog during August and that was our guide to Antalya old town – Kaleiçi.

We’ve not been neglecting the blog. Far from it.

Just very busy doing work on photos and older articles that are already there.

We’ve got so many articles still to come.

And In Other News…

Yerguzlar Caddesi between Fethiye and Çalış is about to get a new eatery.

Perhaps not the type of eatery that will suit everyone…

But one that is keeping a lot of Turkey’s traditional dishes alive.

They’re going to be serving up Izmir söğüş and traditional soups like kelle paça.

And an interesting article in Hürriyet Daily News this morning.

It looks like we might be getting a weekly ferry service from Izmir to the northern Greek city of Thessaloniki which will also stop off at the island of Lesbos.

Definitely a journey we’d be interested in if and when that service begins!

And that’s it for August. Hello September!

And maybe even a downpour or two!

And, when friends arrive, that usually means we end up trying out some different local bars and restaurants as well as the old favourites.