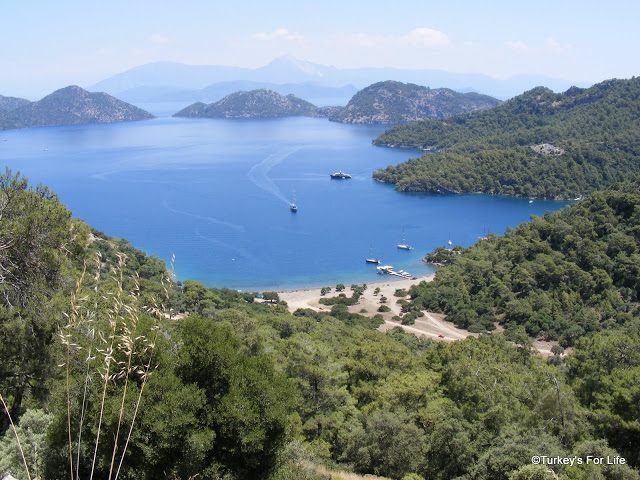 There are always new places to discover in this area of Turkey! A few days ago, we asked a question on our Turkey’s For Life Facebook page: Which is your favourite beach in Turkey? Many people who use the page either holiday in Southwest Turkey or they live here so most of the answers centred around Ölüdeniz and environs.

The great thing about these questions is that we learn a lot because people can add their own suggestions to the poll and one beach in particular had been added that was soon racking up the votes.

And we noticed this mysterious beach ticking up in numbers. How curious. Well, our curiosity soon got the better of us and we asked where it was. Near Dalaman Airport, came the reply.

Previously only known for its airport, Dalaman is slowly revealing its (spectacular) true colours to the world and it’s a whole new area of Turkey that has opened up for us.

Through word of mouth, we’ve already set off to explore the Secret Valley and Akkaya Garden Restaurant. This time, we had three hours to wait for our friends to land at the airport and so, on the recommendation of people on the Facebook page – ‘you must see this beach’ – we set off in search of Sarsala Koyu.

At the second attempt, we found the right road and were soon switching between first and second gear in the car as we dodged boulders while climbing the dusty, rubble-filled mountain track. Almost immediately, we could see Dalaman Airport behind us, in the distance – we never realised before that it was in an area of such natural beauty – and turquoise lakes, directly below.

Thankfully, we had been forewarned that the road wasn’t fantastic so we were prepared for our slow progress. Look out for the views once you get to the top, we were told. And that was the bit we were most excited about…

And it was a ‘WOW!’ moment. ‘And we thought Dalaman was just an airport,’ said Barry, as we stood on the edge of the road, me taking too many photos and Barry with hands on hips, gazing out over the sea towards Mendos and Babadağ (1) in the distance.

Eventually, we tore ourselves away from the view – well, we didn’t have all day to idle around, unfortunately – and made the slippery, winding descent to Sarsala Beach. We’d been told there was a reasonably priced snack bar there and we both had rumbling tummies.

We lunched on a home made köfte half bread – a bargain at 4 lira – and ayran while watching a few Turkish families enjoying picnics and swimming in the calm waters of the bay. I can think of worse ways to pass three hours while waiting for a plane to land.

(1) Babadağ means Father Mountain. Those who go paragliding in Ölüdeniz take off from the summit of Babadağ before landing on Belcekiz Beach.