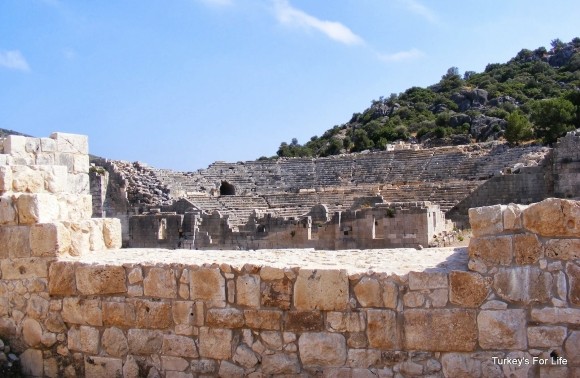 Mention Patara, Turkey, to someone and chances are, if they know the south coast of the country, they’ll immediately have an image of Patara Beach.

And why wouldn’t they? 18 uninterrupted kilometres of soft, golden sand, tumbling sand dunes and shallow waters.

We’ve got a big soft spot for this area.

The hills and mountains surrounding the Xanthos Valley create scenery that never fails to capture us each time we pass through.

There are also thousands of years of history here, and this little corner of Turkey is packed with Lycian and Roman ruins that, these days, are not lying idle.

Archaeologists are carrying out digs on many of the sites, changing previous ideas about how the Lycian people lived and also uncovering finds that make national news.

For instance, the discovery of the Tlos Roman statues in August 2011 caused much excitement and Fethiye Museum was the lucky recipient of them.

Down from the mountains and towards the coastline of the Xanthos Valley are the Turkish UNESCO sites of Xanthos and Letoon – two sites that we enjoy exploring in one day by walking between them along the Lycian Way.

But it had been nine or ten years since we had visited the Xanthos Valley’s other major site, Patara.

Return To The Patara Ruins

We knew about ongoing digs there and had read about restoration projects so we decided it was time to renew our acquaintance with the place.

We’re glad we did because we barely recognised Patara. All either of us could remember was a Roman theatre and a quick look at Patara Beach.

We were with visitors who didn’t much fancy walking around in the heat, so that was about the sum of our explorations the first time we visited.

Just The Two Of Us

This time, it was just the two of us and we had time on our hands.

We parked up in the small village of Gelemiş and set off along the cobbled road towards the ruins and the beach ahead.

As you can see in the photos, the route towards the ruins is exposed and there is no respite from the heat of the sun.

If you do want to spend time getting up close and personal with the Patara ruins, spring and autumn are more advisable so you can enjoy the views of the wetlands. And pause longer at the roadsides to peer down at the ruins below.

Because, if you come to Patara to simply lie on the fine sands of the beach for the day, and you drive there, these are all the ruins you’re going to miss.

Sections of Byzantine churches intermingled with Lycian sarcophagi sit below the embankment awaiting their restoration and continued digs.

Much of this is fenced off – but you can see, as the road climbs gradually higher, the vastness of the settlement that was once here.

Patara was the main port of Western Lycia. It is also the birthplace of St. Nicholas (yes that St. Nicholas) who later became Bishop of Myra (today’s Demre).

There are huge holes in the hillsides that have recently been identified as underground tombs of the Tepecik Necropolis.

There is a feeling as you walk along that this site is really starting to come alive. Amongst the mass of rubble and stone, you can see newly uncovered areas taking shape.

According to the information boards, finds here date back as far as the 10th Century BC, giving evidence that the Lycian period began much earlier than previously thought.

Walking around a museum full of labelled artefacts behind glass cabinets can sometimes seem a bit abstract and lifeless, particularly if the museum is large.

But having these archaeological sites within such easy reach of Fethiye, it’s exciting…well, it is if you like that kind of thing. We do!

Protected by corrugated roofing and metal frames, a series of kilns have been uncovered in the necropolis, along the left hand side of the Patara Beach approach road.

The excitement of places like Patara is in the fact that the digs are ongoing and this metal protection is evidence of new discoveries.

It’s not pretty to look at. But they dare you to take a peek inside because you know what lies under there is something the archaeologists deem to be of significance.

The Arch Of Mettius Modestus, Patara

Eventually, as you continue along the road, what is perhaps Patara’s most famous sight (after its long stretch of sandy beach, of course) comes into view, just around the bend.

This is the Arch of Mettius Modestus…

As we approach the Arch of Mettius Modestus, there are lots more significant ruins to be explored beyond the road we’re walking along.

But let’s stay at the arch for a moment.

The information boards here tell us that pipes, and a pool found close to the arch, reveal that this was once part of an aqueduct that brought water to the city of Patara.

As the city was a major port, the Arch of Mettius Modestus was also a symbolic gateway welcoming people to the city.

Inscriptions found on the arch also show that the people of Patara, capital of the Lycian nation, built the arch in honour of the governor general, Mettius Modestus.

Today, it’s the most prominent structure visible from the road as people drive towards the beach. And a welcome clue that the beach is not too far away.

We veer off to the right where the signs point us and follow the pathway around the city.

There’s so much work going on here and it’s maybe not to everyone’s taste. We’ve mentioned in the past about the difficulties with newly-restored ancient ruins.

As with the obvious recent stonework at Antiphellos in Kaş, new additions are very much a part of the restorations at Patara.

For example, some of the columns lining the agora here are topped with gold-coloured decorative capitals.

And the Assembly Hall is almost completely rebuilt, right down to the wooden doors at the entrances. This section of the ancient Patara ruins is restoration and recreation.

But we’ve debated this in our heads and we like it more than we dislike it.

It gives a more clear picture of what this ancient city looked like and how it functioned. You get more of a feel of its previous importance.

Peering over the walls from the Assembly Hall, we can see the theatre. Strange how memories can deceive you.

Our previous visit to Patara had been eight or nine years previously and the theatre was the only part of the ruins we remember looking at.

I wasn’t overly impressed (we’d paid a visit to Ephesus a few days before so it’s not surprising) but looking at it once more a few years later, it was much bigger than I remembered.

Small amounts of restoration have happened here in years gone by. Wonder if there is more to come?

What Happened To The Patara Lighthouse?

But then we see the sign for the lighthouse. If there’s a lighthouse, then we must be able to see the sea from there, right?

We head off to follow the signs. Again, it’s an exposed, sunny path and a bit of a trudge in the heat along fine sand dunes.

We’re still a fair way from the sea but we can hear the waves crashing beyond the dunes and the trees.

After a few minutes, we come across the site of the lighthouse…

Wow, this must have been such an imposing sight in its day!

As with the rest of the ruins around Patara, archaeological work is ongoing here, too.

The square base is being strengthened, and, on the ground by the base, there’s a ring of huge stones engraved around the edge.

We think this was the decorative top of the lighthouse.

Other numbered rocks are dotted about the area and we’re hopeful that more of the lighthouse will be rebuilt eventually.

But what happened to Patara lighthouse to cause it to be in this state?

Well, the ruins of the lighthouse were only uncovered in 2003 and archaeologists now think a tsunami may have hit it in ancient times, causing it to tumble.

They have also dated the stones to Emperor Nero’s reign in AD 64-65 and so it’s thought this could be the world’s oldest lighthouse.

We climb to the top of the part of the lighthouse that is there. Patara Beach isn’t too far away now.

That’s good news because the lighthouse was a tad further than we envisaged and we’re now very hot and very thirsty.

Time to press on towards the famous Patara Beach…

Well, we’re not really beachy people but you can’t go to Patara ruins for the day and not venture along to Patara Beach, can you?