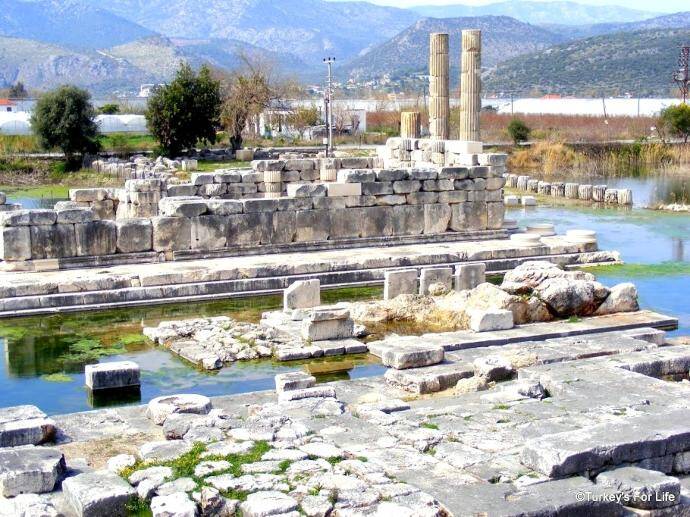 Well, nearly. In our previous post, we wrote about how to get to Letoon and Xanthos under your own steam if you’re staying in Fethiye.

This post and the next one will be about the actual sites.

The Ancient Site of Letoon

There’s something about Letoon. It’s not huge and there’s not really a lot to see but we love spending time there, and other people we speak to say the same.

Maybe it’s the setting. This was the religious centre of Lycia.

It’s a UNESCO site deemed to be of great archaeological importance and yet it just sits there, unassuming, surrounded by the homes, polytunnels and greenhouses of the tomato-growing village of Kumluova.

As you walk along the road towards the entrance of Letoon, the first clue that you’re nearly there is the theatre in its lush, green setting.

Sitting high up on these seats and daydreaming while watching over the daily life of the village is a pleasant pastime.

We always take a little picnic with us and sit on the rows of theatre seats munching and musing.

On entry to the site, you’ll see rows of neatly laid out, labelled boulders.

Excavations have been going on at Letoon for many years and each time we visit, there are more boulders and slight changes to the construction of the theatre or the temple.

The archway ahead is the entrance to the theatre.

It always fascinates me how archaeologists know where to place and label boulders like these.

A ginormous jigsaw puzzle that, to the layperson, just looks like meaningless stone blocks.

There are so many untold stories in those blocks, though, and bit by bit, parts of those stories will reveal themselves as the stones are pieced together.

The theatre dates from the 2nd Century BC. Ancient as that may seem, this makes it a relative youngster compared to the Lycian rock tombs in Fethiye.

And it’s certainly a youngster when compared with the history of the complete site of Letoon.

It’s thought this theatre was built for religious performances where people from all over the Lycian region would attend.

The city of Tlos and Patara are not too far away but it’s amazing to think that people from as far away as places like Myra and what is now the village of Üçağız would make their way to here.

As you leave the theatre, you can see the columns of the Temple of Leto ahead of you, through the archway.

You can also see that these fertile plains mean Letoon is permanently underwater.

Parts of the pathway have been heavily gravelled but our feet were still sinking as we stopped to admire these detailed sections of column.

It’s been a wet winter in Turkey and water levels at Letoon were higher than usual.

A bit of deft tiptoeing meant we were able work our way around to get closer to this mosaic, however.

It’s always a privilege to see mosaics in their original setting, like this one – although the mosaic, itself is a replica.

There is another, more detailed mosaic that was unearthed here – but if you want to see that, you need to go to Fethiye Museum where many other finds from Letoon are also on display.

Even exciting finds like this can cause discussion and disagreement between archaeologists. But it is generally thought that the mosaic represents Apollo and is therefore on the site of the temple dedicated to him.

The Temple Of Leto

But it’s the ruins of the temple of Leto, partly submerged in terrapin and frog-filled waters and with its backdrop of typical Xanthos Valley scenery, that takes centre stage.

Archaeological finds at Letoon date back to the 7th Century BC, so with such a long history, the site always has an air of mystery about it.

The Cult and Myth of Leto

And with any air of mystery comes the world of myth and legend. In short, the myth goes that the nymph Leto gave birth to twins – the future Olympian goddess and god, Artemis and Apollo.

The father was Zeus who just so happened to be a married man.

When Zeus’s wife, Hera, discovered her husband was in love with another and had fathered children with this other, she was – quite understandably, you might agree – jealous.

This jealousy caused her to set off in pursuit of Leto and her twins, putting various curses on them along the way, just for good measure.

On arriving at this site (one of the curses was that Leto and her children would be doomed to wander the earth), Leto wanted to give water to her thirsty children but was prevented from doing so by local peasants.

The peasants churned the water up to make it muddy and undrinkable.

Obviously, Leto was unamused by this act and so used her own mystical powers to turn the peasants into frogs.

The frogs and the tune of their croaking are ever-present around the ruins of the Temple of Leto to this very day.

(We managed to get a shot of this little chap when he thought he was hiding by the water’s edge.)

Because she gave birth to two Olympian gods, Leto was worshipped all over Greece and Asia Minor as the Mother Goddess.

The temple at Letoon was used to worship her in Lycia. She was also worshipped in the city of Hierapolis where son Apollo was also regarded as the city’s sacred founder.

And now you’ve lost yourself in thousands of years of history, myth and legend, it’s time to leave Letoon and step back into the present to walk through the modern village of Kumluova and towards the site of the centre of the Lycian League, Xanthos.