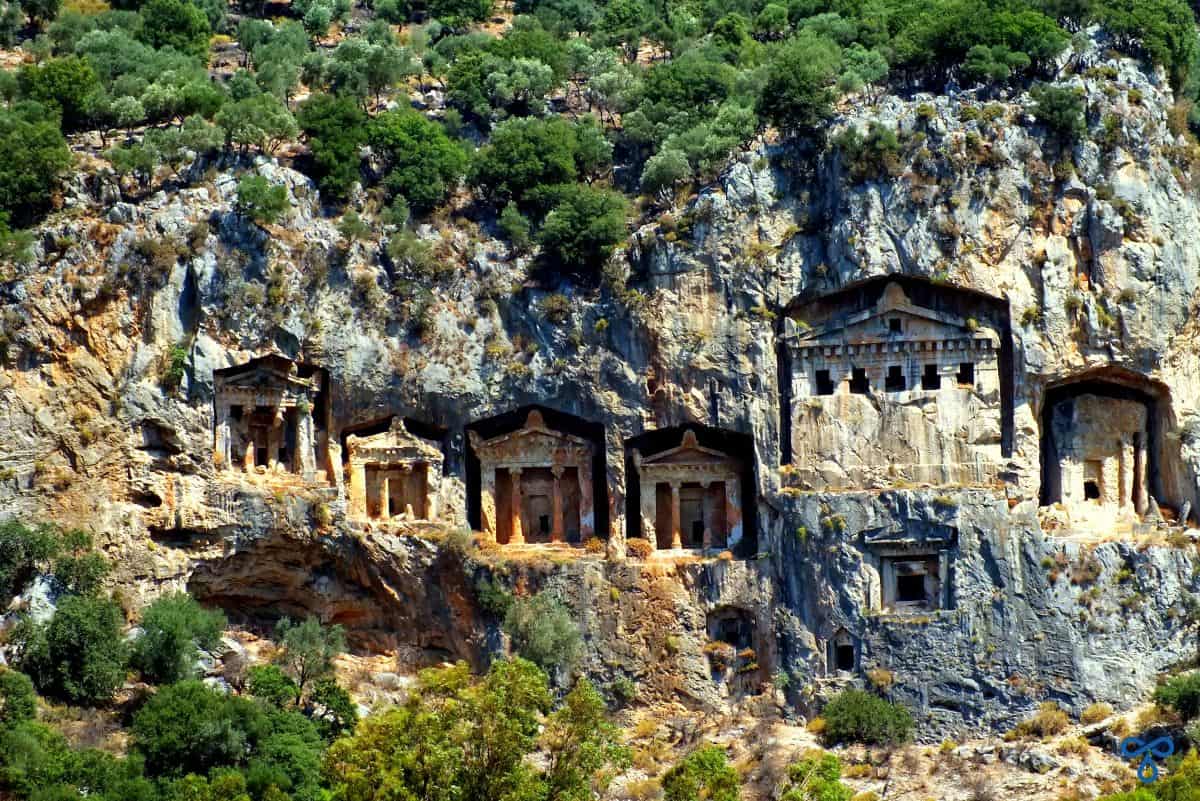 There’s much to see and do in Dalyan. And high up on your itinerary should be an exploration of the ancient ruins of Kaunos. On the UNESCO World Heritage Tentative List since 2014, the Kaunos ruins date from various periods – a real treat for history enthusiasts.

But, as well as losing yourself in the ancient past of this city, Kaunos also sits in a modern day setting that is nothing short of idyllic.

Vast olive, pomegranate, lemon and orange groves lead the eye back towards Köyceğiz lake on one side. Make a 90 degree turn and you’re gazing over the delta towards Iztuzu Beach and the Mediterranean.

Getting to Kaunos is all part of the fun. You can take a long, scenic drive or you can take a car ferry. But, for us, the best way to get there is by the rowing boat service that takes you from the shores of the Dalyan side of the river over to the opposite side.

A few lira gets you a return journey, and, whilst there’s nothing glamorous about clambering into – and out of – the rowing boats, it’s just a really gentle, pleasant way to head over to Kaunos.

We were visiting the ruins with an older lady who was travelling with us. Any worries about how she would fare with the boat were soon put to bed as she boarded and alighted the craft far more expertly than we did!

Kaunos Tombs Of The Kings

In the summer season, a tractor sometimes ferries you to the main site but we were visiting Kaunos in autumn. Perfect ambling weather and it’s not a walk you want to rush.

To the left, roadside stalls offer freshly squeezed orange and pomegranate juice, olive oil and other village souvenirs. On the right, vertical, rugged rock faces make a dramatic backdrop against the vibrant greens of the olive and fruit trees, their branches abundant with fruit.

It’s these vertical, rugged rock faces that, for centuries, have hosted the most famous feature of ancient Kaunos, the ‘tombs of the kings.’

When we visited, the entrance to the pathway towards the 4th Century BC tombs was closed off and manned by a security guard. We were still close enough to take photos from the road, however.

These rock-cut tombs, in the shape of Hellenistic temples were first created in Kaunos, and, through interaction with neighbouring areas, this style was then adopted elsewhere. If you know the nearby town of Fethiye, you’ll be familiar with the tomb of Amyntas and surrounding smaller tombs of those less important.

The Archaeological Site Of Kaunos

The walk to the actual entrance to the main site of the Kaunos ruins is around 20 minutes with a bit of a climb as you approach. It was the end of October and a perfect autumn day for us so we weren’t bothered by this.

As we paid our entrance fee and glanced around, we soon realised that, more by good luck than good management, our sturdy shoes were a good choice.

First was the unexpected. We hadn’t seen many images of Kaunos – aside from the rock tombs, of course – so we had no expectations as to how intact the site would be. We also weren’t prepared for the beauty of the setting.

A stunning natural habitat of the Dalyan delta and the sea beyond. Falling below us were the mysterious ruins of Kaunos. We soon (happily) realised the site was much bigger than we had anticipated and there was going to be a bit of uphill and downhill clambering to be done.

The mystery of Kaunos is that much of it is still to be excavated so, much like the ruins of Olympos or Cadianda, you can’t help but let your imagination run free for a while. So many stories here that are still to reveal themselves.

Earliest artefacts that have been discovered date all the way back to the 9th Century BC but the excavated structures we can see today are generally Roman and Hellenistic.

The ruins of the Roman baths (see below) are similar to those at Tlos and are said to be one of the best preserved examples. They’re not quite as dramatically situated as the arches at Tlos but are impressive, nonetheless. And what photographer can resist photographing ancient stone arches with Anatolian landscape beyond.

We’re lucky that we can pick and choose our times to travel to places like Kaunos. A sunny autumn day with clouds rolling in made for perfect photo opportunities and really contributed to that air of mystery.

Even if you visit the Kaunos ruins during high season, there’s a good chance you’re not going to be battling through the crowds.

Kaunos is not a place that is high on people’s agenda (if it features at all) of must sees when they visit Turkey. Is it that little extra effort that has to be made to get there? We don’t know. But if you do make the effort, we’ll bet you’ll not be left feeling let down.

When you enter the site of Kaunos, there’s a couple of route maps which show a long tour and a shorter tour with an estimated time frame for each. For us, when it comes to archaeological sites, your timeframe is your own.

We just set off, following the arrows which guided us along the ancient pathways once walked by the people of Kaunos. As you can see in the photo above, make sure to wear some decent footwear if you want to really appreciate Kaunos. Flimsy flip flops might prove troublesome.

The Temple Of Zeus

As you head downhill at Kaunos, you will see the 1st Century BC temple dedicated to Zeus.

But even that isn’t the full story of this area. Archaeologists also discovered a sacred stone 6.5 metres below the surface. This sacred stone, Baitylos, is the symbol of the city from the 5th Century BC and featured on coins. The stone represented Baselius Kaunios, the god king of Kaunos.

A church was also built in this area, too, so this was an important religious site throughout the history of Kaunos.

And just look at the stunning setting of the Kaunos measuring tool. All the way back down through the lush green valley from whence we came.

At first, archaeologists expected this to be the base of a canonical building but then realised there were no dowel fixtures nor evidence of preparation for further construction.

The circular construction is a measuring tool for the city. Evidence suggests it was used to measure wind speed and wind direction so that buildings and streets in the city were positioned accordingly. This is a first in archaeology and one of the reasons why Kaunos is so unique.

The agora fountain, pictured above, has a list of custom laws inscribed into the rear, facing the harbour. This shows what an important strategic port it was for imports and exports.

It’s difficult to picture what the harbour must have looked like as Kaunos suffered much the same fate as the great city of Ephesus and silted up. This is a process we are still witnessing today as we look out over the wetlands from the ancient city to the distant sea.

Well, we can’t visit an ancient city and not visit its theatre, can we? Not on the magnificent scale of the theatre at Hierapolis but this theatre is certainly atmospheric.

Dating from the Hellenistic period, it held 5,000 spectators and had one of the first – if not the first – periaktos. This was a type of rotating stage set so that scenes could be changed quickly.

Olive trees have made their home amongst some of the seating area and a climb up to the higher levels reveal panoramic views over the wetlands. For the Kaunosians, this must have been a seaview.

A Climb To The Top

Aside from one other Turkish guy, I had the theatre to myself for a few minutes. I’d somehow managed to enter via the stage area and had taken all my photos around there.

As I went to leave, the guy, standing high up in the seats, shouted to me to go up into the seating to get photos from there.

If he hadn’t bothered to take the time to do that, I’d have missed out on the Kaunos theatre experience. The views – and the fantastic vaulted entrance and exit point!

And that brings us to the ‘domed church’ of Kaunos.

Impressive in that we hardly need to use our imagination to see what once stood here. There it is, in all its glory.

According to information provided at the site, the domed basilica dates from the 6th Century AD and is one of the best examples in the whole of Anatolia.

Next to the basilica is a wonderfully intact mosaic that can be viewed from surrounding platforms. Again, the views from here and down the valley are simply stunning.

We’ll no doubt visit Kaunos again, soon, as our visits to Dalyan are quite regular and we want to explore more of this side of the river.

Revisits are always worth it. Good to jog the memory and to spot parts of the ruined city we might have missed.

We’d love to climb to the top of the Kaunos acropolis, for example. We’re not even sure if this was possible at the time we were there – archaeological sites often have areas out of bounds at different periods – but we know people have done it in the past.

Imagine the views from up there.

We’ll linger over areas we might have strolled by and not noticed or not given enough time to. We’ll explore nooks and crannies that were missed.

That’s all for another autumn day, though. Our time for this particular visit had come to an end.

We strolled back along the road and enjoyed a thirst-quenching glass of freshly squeezed pomegranate juice by the river before being rowed back to the Dalyan shores.

Sandwiched between the Lycians to the east and the Carians to the west, Kaunosians were an indigenous Anatolian people with their own religion and language.

The Kaunos site has many unique features and many centuries of history, making it well worth a visit.

Like the people of Xanthos, they fought hard (but in vain) to resist Persian invasion. Because Kaunos was such a strategically placed port city with various goods to trade, many rulers wanted a piece of the action.

After being ruled by various dynasties, a serious malaria epidemic caused Kaunos to finally be abandoned in the 15th Century AD.

With so much history in evidence and unique archaeological features, we’d love to see Kaunos make it to the full UNESCO World Heritage List for Turkey.