Although Kaş sits right on the edge of Turkey’s southern coastline, it’s not a town associated with beaches. When we think of Kaş it’s usually the bougainvillea-covered narrow streets of the old town that spring to mind and also, for us, the harbour where the boat to the Greek island of Meis leaves from.

Like the centre of Fethiye, Kaş is a harbour town, not a beach resort…but that doesn’t mean you can’t plunge into the Mediterranean for a quick dip.

Around three weeks back, we took a little drive around the Kaş and Kalkan area, stopping en route to get first-time photos of the fantastically beautiful scene that is Kaputaş Beach.

As usual, it was a bit of a photo taking mission we were on and, after spending half an hour or so climbing up and down the ancient Antiphellos theatre and wandering around the old town, we set off to find the beach.

Küçük Çakıl Plajı is just along the harbour road about ten minutes walk from the harbour and in the hot summer months is packed with Turkish kids doing all manner of dives and jumps from the surrounding rocks and platforms.

Look out for a painted wooden sign that points you downhill towards the beach as it’s not immediately visible from the road. 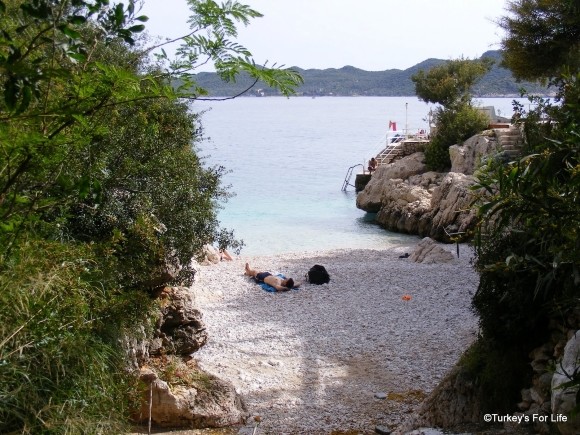 It was the beginning of April when we were there, but southern Turkey’s balmy spring of 2013 has brought the sunbathers and swimmers out earlier than usual. And okay, calling this place a beach might be stretching it a little. Little Pebble Beach is more of a rocky cove – but we are in a town centre and the sea here is pristinely clear.

We’ve been to Little Pebble Beach Beach a few times over the years but, although we knew Big Pebble Beach existed, we’d never been and weren’t even sure where it was. Well on this day, we were in the car so we set off, further eastwards along the coast road.

We saw a signpost for it after a couple of minutes drive and were lead uphill along a winding road before dropping back down to sea level.

And why had we never been to this place before? We’re definitely coming back here someday! 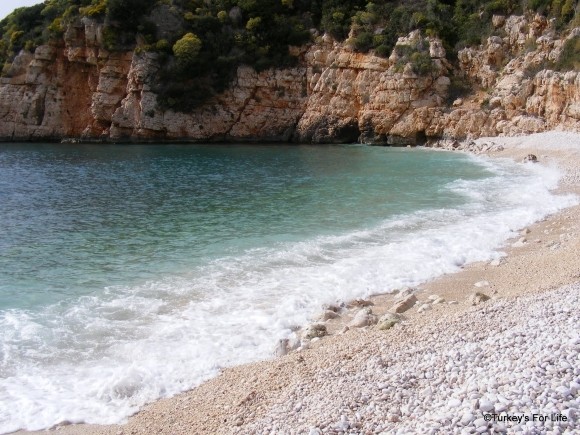 No doubt the atmosphere changes a little in the high season as the beach will be more crowded – but on this day, there was a completely chilled feel to the whole bay.

Kaş has always been well known for its bohemian vibe and it looks like this is the place where the young fashionistas of the bohemian look come to spend their lazy days, relaxing on the pebbles with a beer and a picnic.

Again, the sea is so clear and inviting here and a small row of four or so wooden snack bars complete the look. It’s perfect! 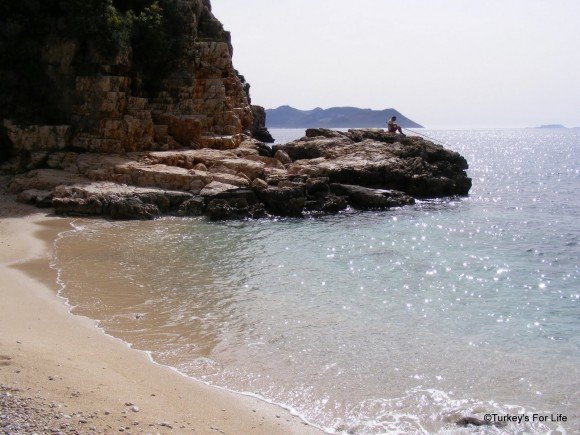 Chilling out on Büyük Çakıl Plajı

And not everyone was enjoying company and sitting around on the beach. Some prefer to relax on a Saturday afternoon in solitude, just like this guy, enjoying a spot of fishing. Wonder if he caught anything…

This area is a whole new side to Kaş for us and as we left Big Pebble Beach, we noticed a Lycian Way marker pointing further along the road. We were on a roll now so we jumped in the car and set off to see what treats lay ahead. And treats there were!

We’ll tell you about that in another post, though…

I can imagine how relaxed that fisherman must have felt and I love the sun sparkling on the water. Can't wait to get to Turkey.

@ BacktoBodrum: Ha ha, we could quite happily head back that way, too, soon.

@ Ozlem's Turkish Table: Well maybe it all looks lovely and warm for you. :) We're all baking in Turkey.

@ keefee: Well, we try to steer clear of the waters around the Med till at least mid June for that very reason. ;)

They look so inviting from my end -especially the big pebble beach, enjoy for me too please: )

Makes me want to hop in the car and head south.