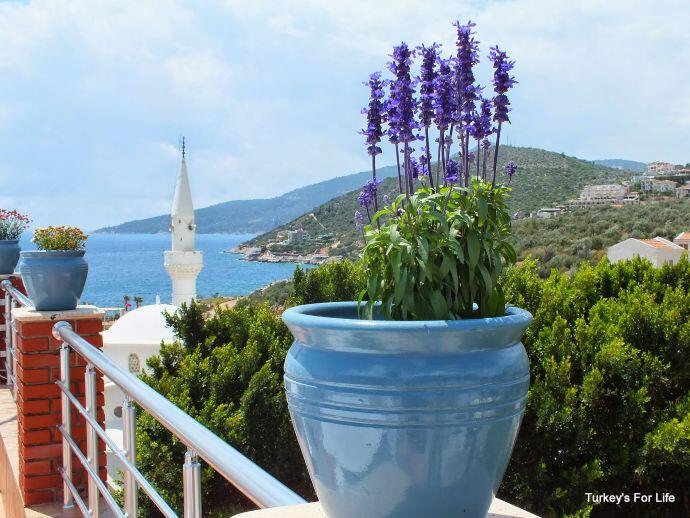 This little Fethiye exodus to Kalkan to attend the opening of Rana Butik Doğaltaş had involved the usual palaver where you end up thinking, “Surely this could have been much easier than everyone is making it.” The logistics of let’s-all-go-on-a-day-trip always seem to lose a bit of logic, and so it happened that, “Barry, you go in this car. Julia, you go in that car with…” It’s easier just to go along with all of this rather than trying to change things.

We set off with our little group, and Barry and entourage would follow a bit later once our friends’ babies had woken up. You know me – I don’t do shopping. Rana’s shop is lovely – it’s full of really unusual clothes and jewellery and I’m a sucker for an old building. Our friends set about trying different outfits on. I wander around, taking photos. I wander upstairs and try on a few rings. I look at Kalkan views from the balcony. I wander back downstairs. I look around the clothes…again. Right, that’s me done. Boredom has hit, and Barry’s still not arrived, and our friends are still gushing over clothes. “Ohhhh, that’s really you. Try the other one on again and we’ll compare. Yeah, that’s a lovely length on you.”

Groan. This is the bit I just don’t get about shopping. Pick it up, try it on, buy it, get out of the shop and go and do something more interesting. That’s my motto. I know I’m in a minority here but that’s life. And just as I’m looking at our friends in amazement, thinking, “Someone give me strength,” Barry arrives. We go off for a little wander around Kalkan to take some photos.

First stop – we get a bit of height. Kalkan’s showpiece for us is the pretty whitewashed mosque just by the sea. Most photos we take of Kalkan are based around this mosque. This photo is taken from the terrace restaurant named after Samphire, next door to Rana’s shop. As terraces go…well, you can see for yourself, but more about that in another post.

We brave a wander down to the seafront to photograph the harbour and the beach. Any wander to the sea in Kalkan is always done in the knowledge you’ve got a steep climb back from whence you came – unless you’re getting a taxi of course. Well, we need a leg stretch and Rana’s shop is only the next street back so it’s not too taxing a thought, hauling ourselves back.

It’s early season when we go – the beginning of May – so the beach and the harbour are peaceful; a lone fisherman on the beach and that’s all. There’s something very calming about watching fishermen, but maybe that’s just me.

We need to find a bank so we climb the hill towards bank-type civilisation, passing Kalkan’s contribution to Turkey’s rainbow stairs. A good effort it is, too. So colourful and someone has taken the time to remind us we’re in Kalkan, too. Not that you could forget. Steps and hills linking pretty, narrow streets. That’s Kalkan.

And then it’s time to return to the opening of the shop. By now, friends have bought outfits, had them altered (clothes are altered to fit you exactly) and we arrive back just in time for the nibbles and punch. Perfect! The bar opposite benefits, too, as we all make use of their seating, drink çay and order snacks.

Eventually, it’s time to leave and retire back to Fethiye. It seems only natural that, as this was a ‘family Deep Blue’ outing, we head straight to Deep Blue Bar when we return…so that’s what we do.