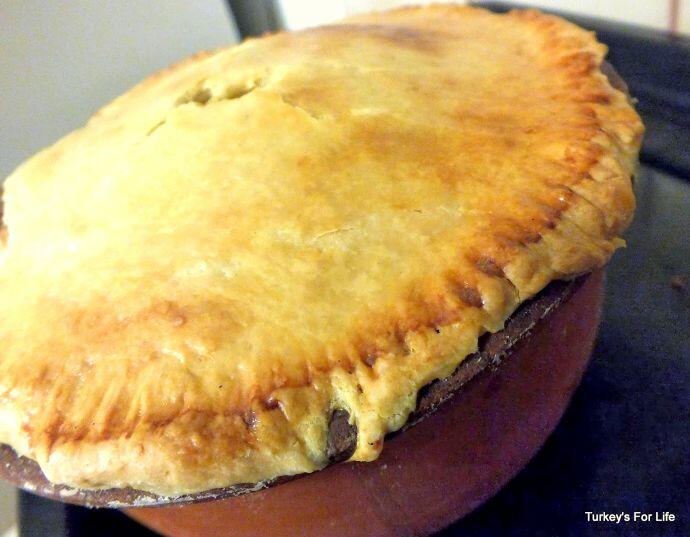 We do get the odd pang, every now and then, for some good old English comfort food (remember our recipe for home made crumpets many moons ago?) and recently, during a rare cold snap in Fethiye, our bodies just decided it was time for a bit of that type of food.

That type of food where you forget about calories and fat content and you just sit in front of the fire and take pleasure in fulfilling that craving – Barry decided to make us a big, fat meat and potato pie.

Being from Wigan, we’re no strangers to pies. Wiganers are known in England as ‘Pie Eaters’ by those folks from surrounding towns. Some people use it as a bit of a mocking nickname – but us Wiganers are quite proud of it. Because there’s no denying, we do eat pies. Lots of them.

Even the local bakeries; when we were kids, they sold all sorts – bread, cakes, pasties, sausage rolls, sandwiches – but there was always a vast array of pies. And the local bakeries were called ‘the pie shop.’

Not too sure what the health standards of your average Wiganer is as a result of this ‘pie upbringing,’ but there you go.

Meat and potato pie is a favourite. Everyone had their own favoured pie shop because some Wiganers like a pie with lots of gravy inside, some like a chunky filling with little gravy, some prefer a velvety pastry while others like a golden crust.

These days, lots of the traditional pie shops have disappeared – closed down or taken over by national bakery chains – but at least we can still make our own.

And, first things first, we need to make the filling for our pie. As is usual with us, quantities are a bit haphazard, as you’ll see further through this recipe.

For the pastry casing

Now we need to make our pastry casing. Some pies just have a lid but we are making a deep dish pie in a full case – this is how they were in Wigan, and this was what we wanted in Fethiye’s cold weather.

And it’s simple really. Half the amount of fat to flour – it’s just the quantities you need now. We used 300g plain flour and 150g fat (our fat was a combination of butter and margarine, but you could use lard).

Now, if you are a seasoned professional when it comes to pie making, you might well be thinking we have a lot of filling and pastry here. If you are thinking that, you’re thinking right!

Time To Make Your Meat And Potato Pie

We used a 50cl bowl, roughly 5cm in height and 8cm in diameter. Grease your bowl by rubbing butter or margarine lightly around the base and edges.

The aesthetic side of serving a deep dish pie like this, between two people, is not easy but if you’ve greased your dish beforehand, it does make life a lot easier!

Now, we’ll be honest here: We had lots of filling and pastry leftovers from the quantities we used. Fortunately, we’ve also got lots of smallish foil pie trays in our cupboard from a previous cooking experiment of ours.

Barry set about with a mini production line and he made 6 more small pies, just with pastry lids and no casing. You can either put these in the fridge or freezer, depending on when you want to eat them.

When you want to eat your smaller pies, just whack the oven on 180 degrees celsius and bake until your pastry is golden.

Serve with thick crusty bread and brown sauce (if you want to, that is) and you’ve just got perfect winter comfort food. Obviously to be enjoyed as a rare treat, you understand. And, as we’re in Turkey, while you’re enjoying your pies…