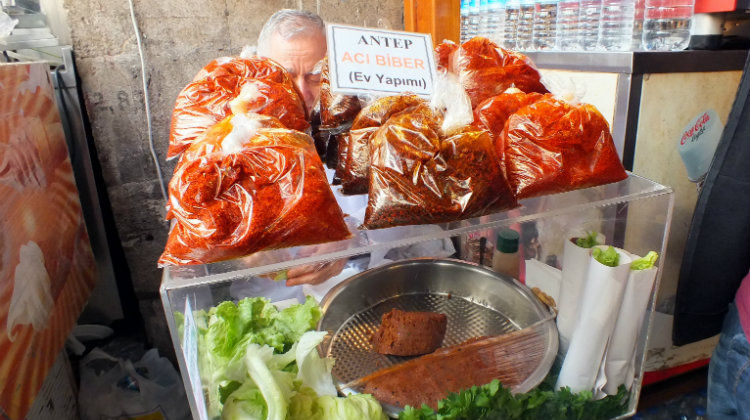 We’re sure he won’t mind us telling you this – well, we’re telling you anyway, aren’t we – but our lovely friend Anıl, Mr Tech Expert, foXnoMad, has a bit of a penchant for (or addiction to) çiğ köfte. He loves the stuff.

In March-April of this year, he came to stay with us in Fethiye for a few days and çiğ köfte was very much a feature of his stay. If we left Deep Blue Bar, no matter what ridiculous time it was, we stopped off for çiğ köfte. He joined a gym for the time he was in Fethiye and, each night as he was on his way back, he’d message, “I’m stopping for çiğ köfte. Do you want some, too? Well, I’ll bring some anyway.”

Yes, it seems çiğ köfte is back on the Turkish street food scene in a big way (there are now numerous places in the centre of Fethiye where you can drop by to pick some up) and Anıl, for one, is very happy about that!

But the version you’re most likely to find these days is that one that is suitable for vegetarians and vegans, too. The version we first tried was not quite like that…

We were first introduced to çiğ köfte many years ago by a Turkish friend who invited us round to his house for a ‘çiğ köfte night.’ Çiğ means raw…and we soon realised we were going to be eating raw meatballs!

Can’t say we much fancied it – raw meat didn’t really sound too appetising – but we’re up for most things, so we went along. Barry had to get involved in the process – it must be a man thing, the production process – and all was explained to him as he and our friend worked hard, kneading the mixture in the night air.

Good quality, lean meat had been ordered from the local butcher and had been minced three times. On a huge circular tray, this meat was mixed with fine bulgur wheat, biber salça (red pepper paste), finely chopped onions, fresh herbs and various spices.

As Barry and our friend kneaded and kneaded, the spices and the heat from their hands slowly softened the bulgur wheat and ‘cooked’ the meat. All perfectly safe…if you know what you’re doing that is. Eventually, the mixture was ready and small sections were taken off and moulded into separate köfte shapes.

Now for the eating bit: we were given one cos lettuce leaf, a couple of çiğ köfte and a wedge of lemon.

“Put your köfte in the middle, spread it around a bit, squeeze your lemon juice over the top and then roll your lettuce.”

So we did, and we ate it – super spicy – and we ate more, and we enjoyed it. And most importantly, we lived to tell the tale! A true foodie experience for us. And that is the only time we’ve ever eaten çiğ köfte in its original form.

Due to increasingly stringent food regulations around the world, the explosion of çiğ köfte places around many of our Turkey haunts are producing etsiz çiğ köfte. The çiğ köfte is made from bulgur wheat and the meat is omitted.

Great news for the vegetarians and vegans of the world. And, for the meat eaters, it’s not so bad either because a true usta (master) of çiğ köfte will make such a high quality mixture that you wouldn’t even realise the meat isn’t there.

While it is lovely to tour around Turkey, trying out all the local foods, money and time mean it’s not always possible to do that – but, happily, in Turkey, there is a not-necessarily-second-best solution: Istanbul.

A cross section of people from just about every town and city of Turkey live in Istanbul and have inevitably transferred their local cuisine with them. This means a whole variety of regional restaurants, lokantas and, of course, fabulous Istanbul street food.

While we were in Istanbul in April, we again met up with Anıl who was very excited to tell us he’d tracked down his favourite çiğ köfte guy after a few days of looking for him.

“Come on. Let’s go and eat çiğ köfte. You’ll love this one.”

We do like the vegetarian version of çiğ köfte, it’s just that we’re perhaps not (no, we’re definitely not) quite as enthusiastic about it as our Mr Foxnomad.

We were in Galata and the çiğ köfteci was over the bridge in Eminönü. Well, we’d had our fill of kokoreç by Galata Tower so a quick hop across the Galata Bridge for another little street food treat wasn’t going to do any harm. Let’s go…

We found Orhan Usta by one of the entrances to the Egyptian Spice Bazaar, squashed into an impossibly small corner of work space but doing a brisk trade in çiğ köfte dürüm.

It’s not that he moves around a lot, Orhan Usta – he’s been here, in this little corner, for around 20 years, apparently. The reason Anıl had struggle to track him down is because it’s one of those once-it’s-gone-it’s-gone situations. As soon as he’s sold up, Orhan Usta takes himself off home and Anıl had been getting there too late.

We were there in good time and Anıl and our çiğ köfteci had a little chat whilst I asked if I could take some photos – not everyone appreciates you taking your camera out and photographing them or their wares. Orhan Usta was different though…

“Have you got video? Do a video. Stand here.”

‘Here’ is part of that already impossibly small work space. I wedged myself into a tiny nook and made a short video of Orhan Usta taking us through the çiğ köfte dürüm process.

“First the çiğ köfte, then the lemon, then the parsley. Now a little heat.”

There’s a little glint in his eye at this point. Orhan Usta does a mean hot, bitter sauce. Guess he thought we might not be able to deal with it.

“Is she getting the sound,” he asks Anıl at this point. I was trying not to answer because I didn’t want my dulcet tones ruining the video. “She’s not getting my voice.” I am, I am.

“Now the lettuce. Now we roll it up. There you go.”

And that was our çiğ köfte dürüm. 4 TL (about £1) worth of pure zingy, spicy loveliness. So much did Anıl enjoy his that, as we chatted with Orhan Usta (he’s a very amiable chap), he ordered another. It was probably the best çiğ köfte we’ve had to date, but what makes it so special?

“But not just any pistachios,” he says. “They’ve got to be the very small ones.”

And then there’s the salça (tomato or red pepper paste). This is such a huge part of Turkish cuisine that you buy it by the jar (or bucket) load from supermarkets and markets.

Orhan Usta’s salça isn’t from a jar, though. He makes his own and all his peppers and tomatoes are sundried first. He sells his salça in tubs and dips pieces of lavaş into it for us to try. Such simple joy in being able to sample these homemade foods in a tiny little corner of a humongous city.

But it’s the piled up bags of chilli flakes we’ve got our eyes on. These are homemade, too. There’s medium hot, hot and very hot.

We feel we’ve hung around this little stall for a long time; our çiğ köfte dürüm are long since polished off so the least we can do is make a purchase. Well, chilli flakes are never going to go to waste in our house are they? We buy a bag of hot and a bag of very hot.

“Put them in a jar and keep them in the fridge and they’ll be okay for about a year,” he says.

That’s exactly what we’ve done but I somehow doubt they’re going to be there for a year!

“Thanks a lot and see you next time,” we say as we’re leaving.

“Well, don’t leave it too long. I’ll only be here another couple of years and then I’m going to retire to Antalya and do nothing but fishing!”

Hope he gets his dream…

Where To Find Orhan Usta & His Çiğ Köfte