We’ve cheated a little bit with our tales from our week-long blue cruise on a gulet because we changed the order a tad. So far, on this cruise, we’ve explored ancient Phaselis, we were entranced by the beach and mysterious ruins of Olympos, we’ve taken a trip to Lycian and Roman Myra and visited the church of St. Nicholas in Demre. Then, we took you across the bay to show you why we fell in love with Simena (modern day Kaleköy) when actually, our first port of call on that day was a sail along the north shore of Kekova Island.

But there is a method to this little rewriting of history; you see, the following day, we again sailed across to Kekova Island to swim at Tersane so this post will combine those two days into one.

Anyway, let’s go right back to the beginning of that particular day: dawn… 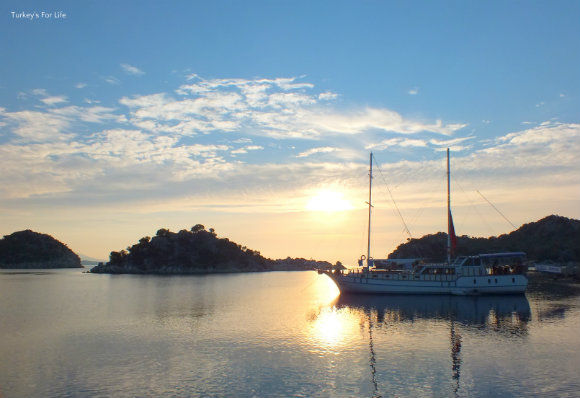 Between the small town of Demre and the village of Üçağız is a series of sheltered bays known as Gökkaya. Whilst we were on the gulet, we were determined to take in at least one sunrise over the Mediterranean and Gökkaya was the perfect place to do that. Still waters, countless rocky islets, the sun’s blinding reflection, a smattering of other gulets…Dreamlike. 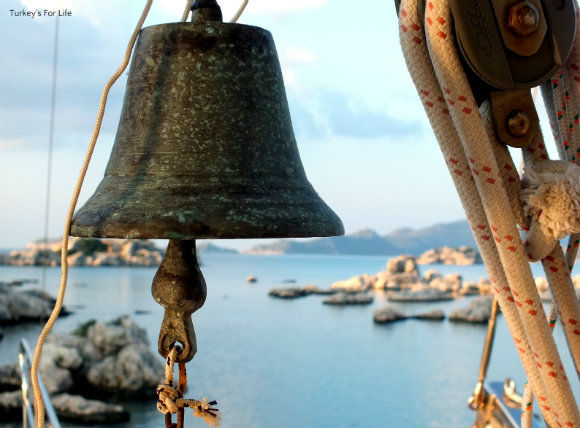 Dawn – in an hour or so, this bell would ring to signal breakfast time

Neither of us are particularly morning people but normal routine doesn’t exist on a gulet. If ever you want an experience where it feels like the real world ceases to exist, a gulet cruise has got to be it! And so it was that we arose early and, once we’d taken in the sunrise, we waited in anticipation for our gulet to set sail for Kekova Island and view the sunken ruins. 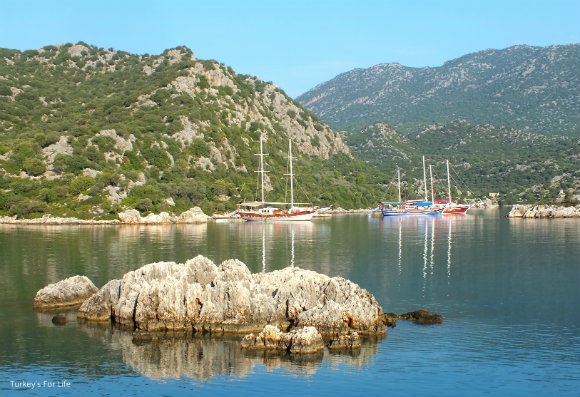 The Scenery Of The Gökkaya Bays Is Quintessential South Coast Turkey

Eventually, the bell was rung to signal breakfast time – and we ate cheese, olives, eggs, tomatoes and other Turkish breakfast treats with views towards other anchored gulets. This is a popular area for boats to shelter but we were doing our cruise in mid October so we benefited from relative seclusion and tranquillity.

Ever since our first visit to Turkey, we’d always wanted to visit Kekova Island. Known as the sunken city (batık şehir), we’d seen so many tourism posters and online photos and we were now itching to get there to see it for ourselves, in person. 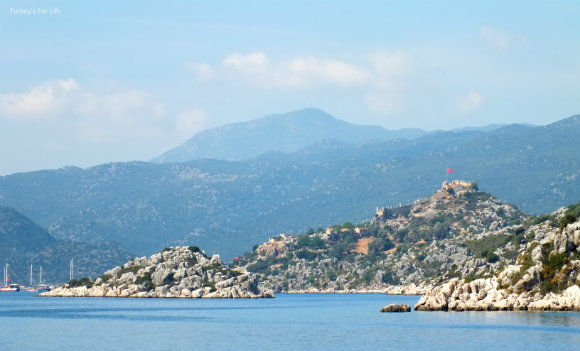 We sailed over towards the Kekova region

As we entered the Kekova region, we could see Kaleköy in the distance, tantalisingly close…but that would have to wait. First of all, it was across to the famous Kekova sunken city to join the line of day trip boats, dinghies, kayaks and other gulets that were slowly gliding by. 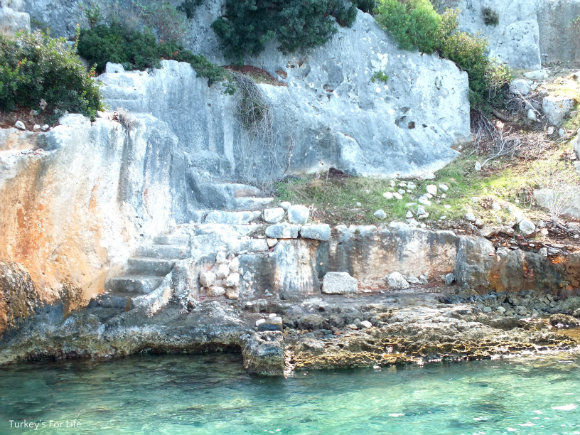 The town on Kekova Island clung to rock faces and became partly submerged following an earthquake in the 2nd Century AD. As our captain expertly steered our hulking gulet by the shallow, rocky waters, we could see steps curving first down the cliff faces and then into the sea.

In the Lycian era, Kekova Island was known as Dolichiste and, even following the earthquake which destroyed and submerged the town, the island has still been inhabited at various periods throughout the centuries. 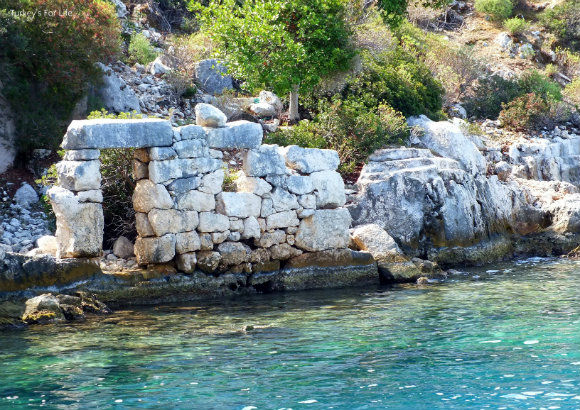 Slowly, slowly, our gulet glided close to the shoreline of Kekova Island. Our captain is from this area of Turkey and obviously knows these waters inside out – but we still couldn’t help but be impressed by the fact that we weren’t running aground.

It was a hot, humid day and the sea below looked so tempting. But maybe the sea looks even more tempting around here because it is forbidden to swim in it. Kekova is a specially protected area, and swimming, snorkelling and diving are prohibited so as to protect the ruins and their artefacts. So, visitors to the sunken city content themselves with keeping afloat in boats, dinghies and sea kayaks, all of which can be hired locally. 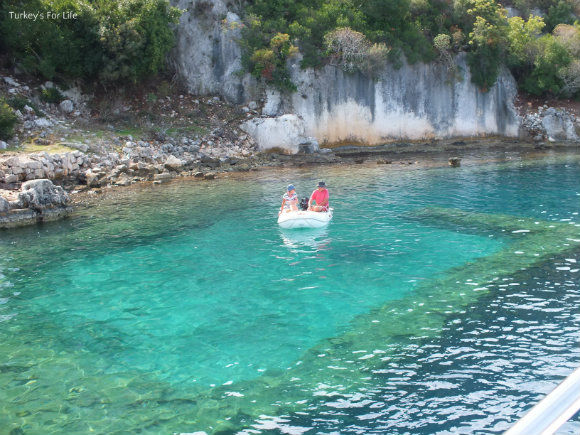 As a standalone sight, the sunken city on Kekova Island probably wouldn’t wow you so much – but the whole experience of sailing over the top of the ruins and of being in the Kekova region, generally, is most definitely a wow. We’re in a sprawling, sheltered bay of turquoise waters; our opposite shoreline is home to Simena and Üçağız, harbours, marinas and more Lycian rock tombs than we have ever seen in one place. All of it is just so picture-postcard pretty.

Swimming At Tersane On Kekova Island 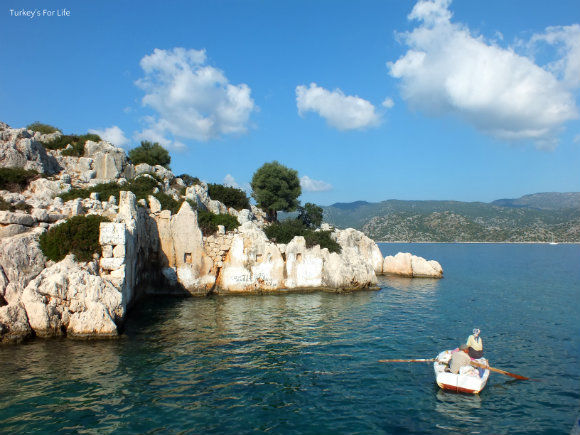 Our view as the gulet anchored at Tersane

And don’t worry about the fact that swimming is forbidden amongst the ruins of Kekova sunken city. A continuation along the shoreline, round towards the southwest of Kekova Island and you arrive at Tersane (apparently, ancient Xera). Again, if you read about Tersane, you will probably come across descriptions of a bay packed with gulets, day trip boats and sea kayaks.

However, good old mid-October again, and, apart from a few early morning rowers and a couple of day trip boats, we were in the bay alone. The sea here is still calm and clear and you’re allowed to swim and snorkel. As our gulet anchored, we leaned over the side, smiling to ourselves as we watched amca and teyze doing some early-morning fishing amongst their ancient ruins. 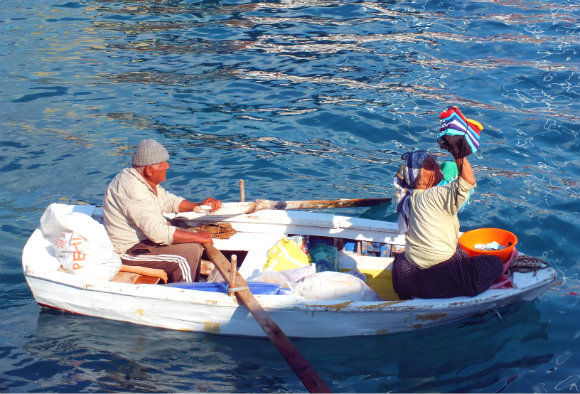 Ahh, so that’s why amca and teyze go ‘fishing’ at Tersane

And we smiled even more – not remotely surprised – as amca did an about-turn in the rowing boat and teyze produced (where from?) a stack of coloured shawls in the hope of selling them to the boat trippers. Whether she was successful or not, we didn’t see. We were off for a swim!

No photos of Tersane Bay on Kekova Island because my camera isn’t waterproof – but this is the place where we swam ashore and spent a little (shingle) beach time amongst the ruins of a Byzantine church. In the real history of our gulet cruise, we then sailed off across the bay to Simena but we’ve already told you about that. The following day, however, we stayed in the Kekova region and anchored at Üçağız – and that’s where we’re taking you next…

I love all your pictures, but that sunrise one makes me swoon just a little. :-) How blissfully peaceful.

Ahh, yeah, the sunrise around Gökkaya and Kekova was just so lovely, Krista. A really perfect place to catch the beginning of a whole new day. :)

. . one of our favorite 'peace-and-quiet' bolt-holes - albeit in the winter when there are no tourists/visitors. It's a magical little corner of Turkey.

Yeah, the whole Kekova region was lovely and quiet when we were there, Alan. Keep seeing summer photos and feel fortunate to have seen it when all was peaceful. :)

One of my favourite places. Everyone should get the chance once in their lives to sail into Kekova. It is truly magical.

Yeah, we loved this area in particular, BacktoBodrum. Our boat crew were from Deme so we stayed around the Kekova area for a couple of nights. :)