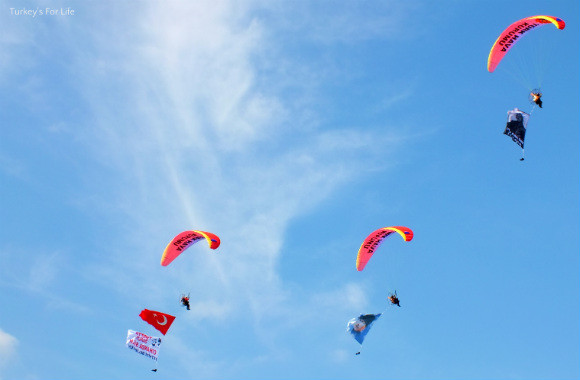 Welcome to another of our little alternative and random news updates for life in February 2016 in Fethiye – and much of the talk has been of the weather.

Spring has definitely arrived early to our town this year. And that means everyone and everything is coming out of hibernation.

The bars and restaurants along Fethiye harbour and Çalış Beach are getting a little early sunny weather boost.

But let’s look at what else has been going on, first…

Every year, on 27th February, commemorations take place at the statue of Fethi Bey who stands in front of the Telmessos Theatre on the Karagözler.

Fethiye is named after him, and, as he was a pilot, there are usually flyovers by various aircraft.

So, for much of the morning of the 27th, these guys were traversing the skies along Fethiye harbour and towards Çalış.

As you can see, they did this in February’s sunny weather.

(Update 2018: the statue has now been moved to Fethiye’s new Şehit Fethi Bey Park, which is also named in his honour.)

Throughout the life of this blog, it’s been littered with Fethiye harbour updates and here we are, in 2016, still going.

The photo above is the section heading towards Çalış, beyond the lighthouse cafe, Reis. The building you can see in the distance is the courthouse.

Canals have been tidied up, diggers and dumper trucks are constantly digging and removing earth. And we reckon around 100 trees have been planted, too.

We’ve seen the ‘artist’s impression’ plans for this area. But, as usual, we shall wait and see if those ideas are still in place.

For now at least, there’s action on this final stretch of the harbour.

And that’s good news for those of us who have spent many a year weaving through muddy pathways in winter, only having to turn back and hit the main road when all becomes impassable.

In last month’s update, we showed you a photo of a group of new palm trees along Phase 2 of the harbour.

Ahh, well all has been revealed since then and the new park is almost complete.

We’re not going to say much here, in this post, as the park’s opening day is in a few days.

On the Fethiye eating and drinking scene along the harbour, a new place, Luvi, opened its doors (actually, a good few weeks ago).

Luvi is next to Denizatı Restaurant & Bar and is where Nar used to be.

And along the main road, another seafood restaurant has opened its doors, next door to Vale Bistro.

The new place is Aborda and used to be along Karagözler 2.

So, whilst they’re new to the harbour stretch, they’ve already got a decent reputation from their old address.

Seafood lovers, you’ve now got oodles of choice along the harbour!

In February, up in Taşyaka, Baba Fırın opened their second branch…so we went along for a nosey – and indulged in this pumpkin cup.

They already had their old Çalış branch – but now they have this new one too.

Rather than write a whole new post, we’ve merged both Baba Fırın branches together in one blog post with address info etc, should you fancy a visit (which you should!)

Back to the Karagözler and we were happy at the end of February when the guys at El Camino announced on their Facebook page that they were back from their rest and travels and the bar and hostel was reopening.

We were straight up there! Great to have them back!

And Just Eating Out

February saw a new addition to our list of places to eat and drink around Fethiye.

We finally got round to doing a blog post about one of our long time favourite eateries, Seçkin Restaurant.

Lots of yummy foodie pics in that post if you missed it.

And we had friends here at the end of February who wanted to do a long stroll on the flat.

We started off with a bit of refreshment at Cafe Park Teras and then strolled all the way along the harbour, along Çalış Beach.

And then on to Koca Çalış where we crashed to our seats at Zentara Beach, ate burgers and enjoyed this winter sunset.

No bad reward for our efforts, don’t you agree?

Cooking At Home In Fethiye

No new recipe for February on the blog.

We have been cooking lots; just not had a chance to write up the new foodie bits yet.

But we have cooked up some regulars, too.

So that’s prompted us to update and improve two more of our existing Turkish recipes.

There are two pilav dishes in Turkish cuisine that are perhaps more well known than others for visitors to Turkey.

One is the famous Turkish rice (şehriyeli pilav). And the other is what you’re looking at in the photo above.

Bulgur pilavı is often served with kebabs. We’ve now updated our recipe for Turkish bulgur wheat pilaf because we’ve been eating lots of this recently.

Also, we might have had a ridiculously warm Febraury in 2016 but we still pretend it’s winter on the food front.

A big steaming bowl of tarhana soup a couple of weeks ago means we’ve also sorted our instructions for how to make tarhana soup. Love the stuff!

A Fab 4-0 Win For Fethiyespor

Yeah, the usual mixed bag for Fethiyespor in February 2016.

Two losses, one draw and a win.

Yes, well victory was ours on my birthday on 28th February -& usually the last day of the month.

How lovely to watch Fethiyespor win 4-0 against Pendikspor.

We’re back to the warm sunny weather in Fethiye for February for this photo.

Saturday 20th February and we were walking along Çalış Beach.

Well, it was such a lovely day, early 20s in temperature and all the bars and cafes that were open had their tables out.

There was hardly a seat to be had.

It just all looked really happy. So I took a quick photo with my phone and posted it to our Instagram and then our Facebook page the day after.

It went a bit mad!

Everyone must have agreed with us that it was a pleasing Fethiye-in-February scene.

This is a definite record in the number of Likes we’ve had on a photo, all thanks to the weather!

February 2016 was a month of high temperatures, sunshine, blossom, buds. And even the odd person swimming in the sea!

Wonder what March 2016 will bring…