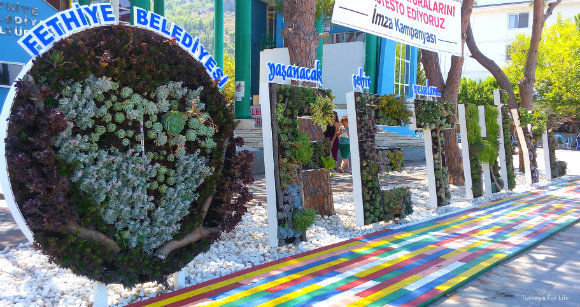 And so, yet another month of 2016 has passed, and, once again, it’s been a flyer. We’ve crammed in loads to our month of August in Fethiye so it’s time to add the last few weeks to our list of Fethiye news updates.

Of course, the end of August means that September is upon us – and we’re happy to report that this post is being written on the balcony on a beautiful, slightly fresher morning. Things are getting a bit more bearable and pleasant around here when it comes to morning temperatures.

So, let’s get cracking with our Fethiye news for August…

Lots of cities around Turkey have huge lettering, spelling out the name of the city and they make for great photo opportunities. The letters are usually of the colourful plastic variety but Fethiye’s are a bit different – well, we like to do things a bit differently in this town. Some Fethiye residents (including us) have wanted a Fethiye version of the lettering for some time – and mayor, Behçet Saatçi, said it was going to happen. So we all waited…

Last month, it finally appeared (but we didn’t have a photo at the time). As with the Ayten Alpman musical notes we told you about last month, our Fethiye lettering is live; live with coastal plants that grow and flower according to the season. Multi-coloured boarding along the footing helps to make them stand out.

The letters are already the setting for various selfies and other photos, so, if you want your own photographic version, you can find them in front of the culture centre; the big blue building at the edge of Beşkaza Meydanı (the big town square).

So there we were, one evening on the 16th August, sitting in Cafe Park Teras, minding our own business when a yacht with huge masts slowly made its way into the harbour. As soon as we all saw it, we knew it was no ordinary yacht. The masts dwarfed all those around it and it entered the harbour with the sunset as a backdrop in complete grace. It looked like we had another special visitor…

We love these little visits to Fethiye by various seacraft. James Dyson’s yacht, Nahlin, proved to carry a very special history and prompted research when she visited Fethiye a couple of years ago. And then there was the visit of Russian billionaire Andrey Melnichenko’s super yacht, Yacht A, last year. Photos galore of that, which, for some reason, we didn’t share on the blog at the time. A quick online search will show you that, anyway. It’s up for sale, too, if you fancy buying it, because he’s ordered a bigger, better version. Wonder if that comes to visit us…

Anyway, the Maltese Falcon – built in Istanbul in 1990 – is available for charter, apparently, so it looks like some wealthy types were enjoying a bit of a luxury holiday aboard the yacht and decided to pop into Fethiye. And why not, eh? We took the photo the following morning as she was about to leave. A short but, surely sweet, visit.

Ahh, don’t you just love the views above Fethiye… August was the month our friend, Jen, came to stay with us for a few days. She’s the one who lives in Istanbul and who we visited Perge in Antalya with, earlier in the year. We did a lot of wandering, walking from Fethiye to Kayaköy on a very hot day, before collapsing for a feast at Cin Bal.

On another day, we also walked up to El Camino Pub for the views and because they’re currently serving a local summer IPA. We then continued along the road for these amazing views just as the sun was lowering in the sky (we wrote about this little circular route many moons ago) and then turned off uphill so that Jen could clamber up to see the views from the Amyntas rock tomb. It was hot…we waited at the bottom on this occasion!

We’ve also got two friends from Wigan visiting at the moment. They’re with their 5 year old son so, as you can imagine, that’s a whole different kettle of fish. Trekking and wandering has made way for swimming pools and water slides.  They’re staying at Letoonia so there’s boats involved, too. The little boy is loving the Çalış Water taxi as well as the Letoonia shuttle boat.

Life In Fethiye Via The Blog

Yes, we manged to get one of the recipes we’ve been using a lot, on the blog – lots more to come. We love our summer salads when the August weather is baking us all and this tangy chickpea salad is a favourite. It’s also really easy to make.

We also got around to telling you about our little adventure to Ölüdeniz Water World and we’ll have another similar watery adventure coming up to tell you about, soon, too. And we’re working really hard on the blog in general. Our recipes page is slowly coming along with the improved look for the recipes so that they’re easier to follow, share and print. And this month, we’ve also been working on our street food section, too. Stuffed mussels and simple nohutlu pilav have been shared on social media during August.

Our Fethiye news usually has a Facebook photo favourite but this month is a bit different. As it was World Photography Day on 19th August, we didn’t want to let it pass so we asked people to upload one of their favourite Turkey photos to our Facebook page.

We were amazed with the response – well, these things can all flat on their faces sometimes. Over 100 people took the time to upload their favourite photo that they had taken. No work of art necessary – just a happy memory. There are some non-Fethiye pics in there – well, it was a celebration of the whole of Turkey – but lots of people chose Fethiye as their theme. Have a browse through and enjoy Fethiye from other people’s perspectives.

30th August was Zafer Bayramı – the National festival which celebrates Turkey’s Victory Day in the Battle of Indepedence in 1922. As we walked through town, flags were waving and people congregated in front of the Atatürk statue in town. At night time, there was also a flag-waving procession which passed along Fethiye harbour and finished at the Atatürk statue on Beşkaza Meydanı.

And last but not least, this month, we also broke through 3,000 followers on Instagram so thanks a lot if you are one of the people who follows our adventures over there. We had hoped to go through 3,000 followers by the end of 2016 so to entice those people to follow a dedicated Turkey travel account when Turkey has been in the news for lots of unpleasant reasons this year; well, we’re happy! People are still interested in Turkey.

Next Month In Fethiye…

Looking forward to the next few weeks… Well, we’ve got lots more friends coming over to play in Fethiye, we’re hoping get away for a few days, we’re both following training programmes for running…and it’s the start of the Fethiyespor season. First match on Saturday night at 7pm. Keep yourself up to date with goings on via our Fethiyespor results and fixtures page and we’ll also be hoping to use Instagram Stories when we’re at matches, too.