Here’s a recipe title for you: Fırında Patatesli Kabak Mücveri. That’s what we’re making in this post.

As far as we’re concerned the reward for your efforts far exceeds the few minutes you’re going to spend grating, chopping and mixing.

This Turkish oven baked potato and courgette fritters recipe is much loved in our house!

How To Make Oven Baked Potato And Courgette Fritters

So, we said it was our take on a classic Turkish dish.

That’s because, as you’ve probably noticed in the title, fritters are usually fried.

Kabak mücver (or courgette fritters) are often to be seen on the Turkish meze table and we’ve written this more traditional recipe for Turkish mücver in the past.

After first seeing an oven baked version some years ago, it is one we’ve played around with over the years, adding extras here and there.

It’s also slightly easier on the oil, and, if we’re being honest, a bit of a lazier version.

Rather than frying in batches, once you’ve done your mixture, it goes into an oven dish and disappears off into the oven for a while.

If you’re cooking for visiting friends, this means you get lots of food for little effort and you can be getting on with preparing other Turkish recipes for them whilst it cooks.

To make oven baked potato and courgette fritters, it all starts off with with the grater and a large mixing bowl.

After chopping the ends off two large courgettes, they’re grated into the bowl. Now, you can peel and wash a medium-sized potato and grate that in, too.

Oh, and by the way, if you want to keep this recipe light, you don’t need to use the potato.

Just use one more courgette, instead. Keep hold of that grater and peel and grate two carrots into the mixture, too.

Now you need your chopping knife and chopping board.

Your Turkish oven baked potato and courgette fritters recipe needs some herb and spice going on.

And a staple; onion. We’re peeling and finely chopping one medium-sized onion and adding that to the grated ingredients.

At this stage, just press all those ingredients down with kitchen paper to soak up some of the excess moisture and then discard.

Now for the herby spicy bit. We need half a bunch of parsley, finely chopped and added to the mixture.

Then we’re doing the same with half a bunch of dill.

We usually find dill really strong and overpowering but this recipe for oven baked potato and courgette fritters can handle it.

Now it’s time for a generous sprinkling of dried mint (around a dessert spoonful) and the same again with chilli flakes (if you like spicy).

A pinch of salt and ground black pepper and that’s part 1 done.

Time to get gooey and messy now. Fırında patatesli kabak mücveri needs the blend that is going to hold all your ingredients together.

We’re talking eggs, olive oil, flour and a touch of baking powder just for a bit of a lift. We beat a couple of eggs and stir into the mixture.

Then we sieve one and a half cups of plain flour into the bowl along with the baking powder.

Mix this well until you can’t see any flour remnants. And then you add in your olive oil – just less than half a cup.

And now we’re good to go…

Preheat your oven to 180 degrees Celsius (around 350 degrees fahrenheit) and meanwhile, liberally grease a baking tray or bowl of your choice.

We use a large circular tray around 30cms in diameter for our recipe.

Pour your mixture into your tray and spread it around so that it’s roughly even in thickness in all places.

Mmmm, and now it’s oven time – that time where your kitchen fills with the aromas of home cooking and you can’t wait for your dish to be ready.

If you’re like us and have a glass oven door, you can even watch – slightly impatiently – as your mixture sits in its tray in the centre of your oven and starts to set and turn golden brown on top.

From sloppy, gooey mixture to Turkish oven baked potato and courgette fritters in around 40 minutes.

Now for your next challenge. Removing it from the oven and leaving it there, looking at you from your kitchen counter, tempting you to eat it…

But do your best to let it cool down.

Once you oven-baked potato and courgette fritters have cooled a little, you can cut it all up however you like.

If we’re cooking for friends, we’ll cut it into lots of smaller squares.

But, if it’s just for us, we like a lovely big cake-shaped slice of it! Yummy! 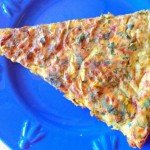 Mmm, this sounds so good. I really love fritters, and baking them sounds so much easier than standing over a hot, splattering pan. :-)

Yeah, the baked ones have got to be lighter, too - well, if you leave the potato out, that is, but we love the oven baked potato and courgette fritters. All the ingredients go so well together. :)

Why have I never thought of this?

Ha ha. Thought you would have done. :) Oven baked fritters are much lighter than the fried version and we love to add the potato just to make it a bit more filling if we're eating it as a meal rather than nibbles.