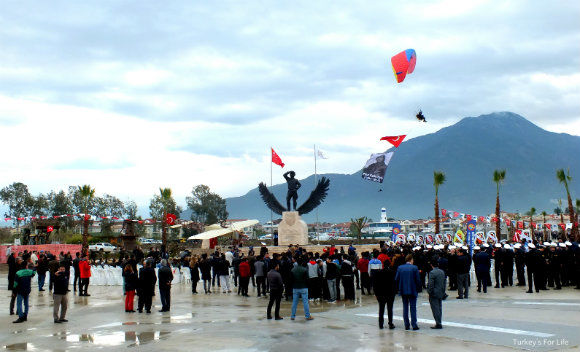 Yes, it’s time for the (almost) monthly news from Fethiye – daily life and random goings on around town.

A deluge of rain, construction along the harbour, new bars, more sporting misery – you know, the usual. But let’s start off with the annual, rather than the monthly, usual…

As some of you may know, the town of Fethiye is named after Pilot Fethi Bey who was killed during a flight in 1914.

27th February is when his death is commemorated with gatherings around his statue.

This year’s commemoration was slightly different. More of a buzz around it because the Fethi Bey statue has now been moved to its new home in the new Recreation Area.

His new position is far more fitting – a real monument of the town rather than being tucked away in his previous hiding place behind the old Iskele Restaurant in Fethiye.

He’s even got an aeroplane next to him on his plinth.

Local students and youngsters from the youth wing of the THK did readings. And, two days in a row, three Turkish Air Force fighter jets did a fly over.

The noise was immense – impressive stuff. We can only see this annual commemoration growing now there’s such a big gathering area here.

You can see more photos from the commemoration in this set on our Facebook page.

Which leads us nicely on to the new recreation area where Fethi Bey is now living. This is still a hard hat area and off limits.

The harbour pathway towards the gathering area had been opened specially, just for that day.

So, despite the rubbish weather, we suspect some people (like us) were there for more than reason – a chance to have little scan around at developments.

From the perimeter fencing, apart from the obvious protrusions of the windmills and the skateboard half pipes, it’s difficult to see much apart from piles of sludge.

As well as palm trees, numerous other trees have been planted.

Judging from their current appearance, they’re most definitely deciduous trees and look like they’re going to be offering lots of natural shade in summer as they mature.

As you can see in the collage above, walkways and waterways and bridges are really starting to shape the project.

Up close and personal, like this, progress is swifter than we thought it had been. Exciting times!

Midsummer is the projected completion time and then we’ll be able to walk from Fethiye as far as Duck Island without touching the main road.

Think this park will definitely feature on our list of Fethiye must sees and dos when all is finished.

Elsewhere along the harbour, those of you who like to wander around by means of two wheels and pedals will be happy to learn that safer cycle paths are currently being laid along Fethiye harbour.

This takes you away from the main road in certain sections.

So busy have we been experimenting in the kitchen over the last few weeks, we’ve not been out and about for food too much.

En route to watch Fethiyespor at the beginning of the month, we stopped off at Mezgit Cafe to get a balık ekmek.

Well, it’s a yummy and filling pre-match snack and helps to dampen the pain of Fethiyespor’s not-so-great results! Mezgit Cafe has been added to our list of places to eat and drink in Fethiye.

Aside from that, we did succumb to a ‘fish and chip Friday’ urge and take ourselves off to Charcoal Palace in Çalış for one of the monster portions served up there.

My birthday on the last day of the month was also another treat day – meze and steak at Çarıklı Et Restaurant. Never disappoints.

If you look at the scores throughout February, you’ll see a mixed bag. 2 losses, 2 draws and one win.

As you might expect, that’s not done much good for the league table position. Crucial home match this weekend that supporter groups are attempting the rally the masses for. Fethiyespor play top of the table, Altay…and we’re away, taking part in Runatolia.

Sure they’ll manage without us…

(Monday Morning Update: Manage they did, with a 1-1 draw yesterday)

February is the month where Spring starts to give us clues that it’s not too far away from us.

Almond blossom on the trees and, as we were shopping at the fish market recently, we spotted lots of baby new potatoes. A few of those were bagged up to take home and make potato salad.

Lavaş bread has also been on our menu this month, as has our alternative to homemade hummus – our recipe for fasulye ezmesi.

We’ve got lots of other new recipes to add to the blog over the coming weeks, too – we’ve been playing with hamsi and also another favourite; sucuk.

Some are traditionally Turkish recipes and others are Middle Eastern experiments.

And now for some news on the financial front…

In February, HSBC bank announced they would be withdrawing the option to withdraw Sterling from their cash machines in Turkey and other MENA countries. And it looks like other banks could follow suit.

Over the years, many of you who live or holiday in Turkey (especially in the Fethiye area) have had the benefit of being able to draw Sterling out of the ATMs, change it into Turkish Lira at an exchange office or bank, and then put the lira into your Turkish bank account.

A good exchange rate, cheaper than paying the transfer fees and no waiting around for the money to arrive.

We used to use this method, too, but for a few years now, we have been satisfied customers of TransferWise.

And, if you will no longer be able to draw Sterling out at ATMs in Turkey then they may be a good option for you too.

If you’ve got a bank account in Turkey and one in your home country, you can transfer money to your Turkish bank account with TransferWise.

They give you the best exchange rate at your time of transfer and they get your money to Turkey, fast. Often on the same day.

If you’re looking for options for getting your money to Turkey as efficiently as possible, these guys are definitely worth a look.

They’re cheaper than the banks, because they always use the real exchange rate – which you can see on Google – and they charge a very small fee. They’re also safe, and trusted by over 2 million people around the world.

(Disclosure: If you make a money transfer with TransferWise via the link above, we will receive a small commission from them. This is at no extra cost to you but helps us to keep our blog up and running)

We’re always doing lots of work on the blog; often behind the scenes stuff that isn’t necessarily a new blog post.

A couple of our categories have been spruced up to make them more useful and a tad more aesthetically pleasing.

Our Istanbul Category was first to get the treatment. And then we did this very category that you’re reading a part of now; our Fethiye News. More to come in the future.

This month, was also the month of the longest, most photo-filled article on the whole blog. We took you on a journey through Ephesus ancient city.

It’s one of the most visited sites in Turkey and it’s also a World Heritage Site.

Completing this post meant we could also bring our list of Turkey’s UNESCO World Heritage Sites right up to date. We’ve still got a few we need to visit!

We might have had a really wet Fethiye weather for February but that’s not meant we’ve not been able to get out there during rain gaps for a little walk.

It’s not surprising that this month’s most liked Fethiye photo from our Instagram account is from a wet day along the harbour.

Whilst we’ve loved some of the photo opportunities during the wet weather, a sunnier March will be much appreciated.