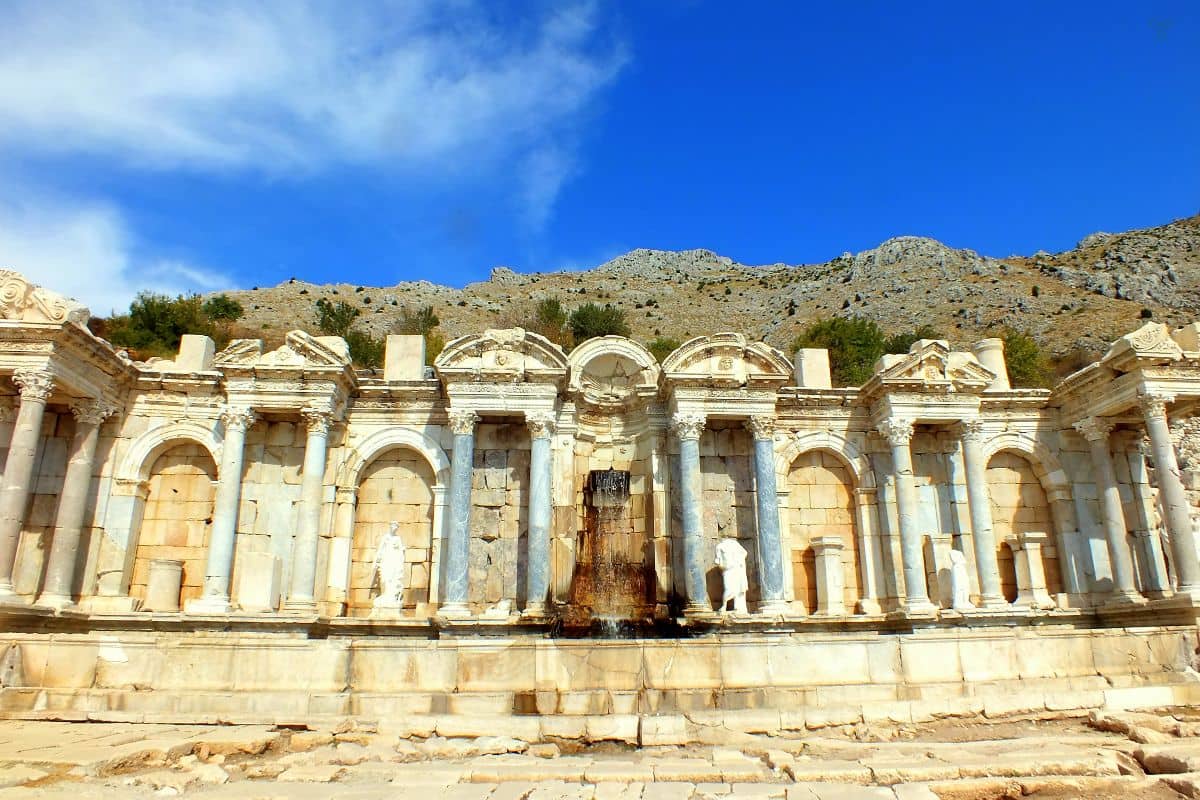 It was August, 2008 when the news hit. International news! A huge intact head and lower leg from a statue of Marcus Aurelius had been uncovered by archaeologists at the ancient city of Sagalassos. The height of the complete statue would be 15 feet.

We knew of the existence of the Sagalassos ruins in the nearby Burdur Province but it was only after this flurry of news and excitement that we knew this place needed to be part of our more immediate radar.

It would be some years until we finally witnessed for ourselves the magnificent ruins of Sagalassos. But we got there in the end…

Heading To The Ancient Ruins Of Sagalassos

It was September and we were on a road trip around Turkey’s Lake District. The trip had already gifted us many fantastic experiences such as Lake Salda, the ruins of Antioch of Pisidia, the town of Eğirdir and its glorious lake. And, of course, homely Göl Pension with its lake views and generous breakfast.

It was over this generous breakfast that we pondered the weather forecast. Our last full day on our road trip. Sagalassos was one of our main reasons for being in this mountainous area.

But the weather forecast was not being kind to us. Rain at 2pm.

We were just over an hour’s drive away from Ağlasun, the town where the archaeological site of Sagalassos is situated. No extra days to play with. No time to spare, then. We wrapped up some sigara böreği and tava böreği from our ample breakfast serving and hit the road on what was, for now, a sunny autumn day.

Before arriving at Sagalassos to witness it for ourselves, we’d seen photos and articles that gave us an idea of some of the ruins we had set off to explore. What we weren’t prepared for, however, was the spectacular setting of this ancient city.

Sagalassos sits 1,750 metres above sea level. Our drive to Ağlasun was indeed just over one hour. And then we had the long, winding 7km climb up to the site. Just us, the slopes of the Taurus mountains and the increasingly distant valley below. Amazing!

I’m not sure what we thought we were going to be greeted with on arrival at Sagalassos. But a modern visitor centre, complete with viewing terrace was a pleasant surprise. We made grateful use of ‘the facilities’ before showing the ticket attendant our Müze Kart and entering the ancient city of Sagalassos.

In parts, wooden and metal walkways guided us around the site built onto the slopes of the Taurus mountains. In others, we followed the mountain footpaths.

It’s thanks to the height of the site of Sagalassos (who can be bothered to climb all that way to loot an ancient city) and a 7th Century earthquake that sent landslides toppling over the ancient city that much of what we see today is so intact.

And, for the fact that Sagalassos looks as it does today, we have the work of Belgian archaeologist, Professor Marc Waelkens and his team to thank.

He and his team carried out archaeological research at Sagalassos from 1989 until 2013, when he retired.  Although he worked on other sites, Sagalassos was his life’s work. Such was his dedication to the site, he was awarded the Medallion For Outstanding Service; Turkey’s most prestigious award for foreigners.

He uncovered what was the most important city of Pisidia and – what he describes as – the most beautiful portrait of the Emperor (Hadrian) in the the world. Hadrian’s bust (more correctly labelled a ‘head’) is now on display next to that of Marcus Aurelius in Burdur Museum.

All doesn’t end there, however. Along with other staff from the University of Leuven and a team of experts from Turkey, Professor Marc Waelkens’ successor, Professor Dr. Jeroen Poblome, has continued the archaeological research since 2014. We’re sure there is yet more big news to come from this site in the future.

The most prominent structure at Sagalassos is the heroon. It’s huge! To give you a bit of perspective, we’ve chosen a photo where Barry does a cameo appearance.

The heroon is 14 metres high and information on the boards at Sagalassos reveal, interestingly, that it is dedicated to an unknown aristocrat. Fascinating that we only have theories as to who this heroon is dedicated to.

The dancing girls around the base may offer some clues. Two of them carry symbols related to the god, Dionysos. Perhaps this aristocrat was responsible for introducing this cult to Sagalassos – or so one theory goes.

You might be getting the picture now. The dancing girls are a replica as the wonderfully preserved original is on display at Burdur Museum.

In the month of September, autumnal wildflowers peep through ancient stones and grassland whilst butterflies flutter and dance around you as you wander Sagalassos. Mountain scenery, flora and fauna, ancient ruins. Fast-encroaching clouds. Sagalassos was proving to be as memorable as we’d hoped it would be.

The main feature we had come to see at Sagalassos was the Antonine Nymphaeum. If the symbol of ancient Ephesus is the Library of Celsus, then, for us, the spectacular Antonine Fountain is the symbol of Sagalassos.

Built across the north side of the upper agora, the statues here look out across the agora and the surrounding mountains and valleys beyond. Some are original statues, others are replicas.

But what is most impressive for us is the fact that no imagination is required here; trying to picture what must have been when the city of Sagalassos was thriving.

Built 160-180 AD, the Antonine Nymphaeum was restored in 2010 and is in a functional state! Amazing. Aside from  a coachload of Turkish daytrippers, we had the site of Sagalassos to ourselves which meant we had ample time to linger around here, taking photos and just soaking up what was all around us.

A Change In Weather

The weather forecast for our visit to Sagalassos was proving to be correct. Despite mountain climates being unpredictable at times, so high up were we that we could see the dark rain clouds creeping towards us.

We weren’t too concerned. We love to visit ancient ruins in spring and autumn. If we could get round the site without getting completely drenched, the clouds would make for dramatic photography opportunities as they have done in the past at sites such as Hierapolis and ancient Kaunos.

To The Sagalassos Theatre

After wandering this mid section of the ruins of Sagalassos, the pathway leads us towards the theatre. It’s a bit of a climb up to this area along a track but the views make your efforts worthwhile.

Sources state that the theatre at Sagalassos had the capacity to seat 7,000-9,000 people and yet the population of Sagalassos was only around 5,000. A clue to the grandeur of Sagalassos?

Time spent clambering around the theatre and its surroundings reveal to you the real remoteness of Sagalassos. In winter, the area is blanketed in deep snow and it’s easy to see why when you’re stood up here on an autumn day observing the rolling skies and the ancient ruins below.

From the theatre, looking at the sky we knew our time at Sagalassos was limited. The wind was now whipping around us and it was only a matter of time before those clouds became a driving rain. We followed the pathway back down towards the agora area, passing the heroon to our left, and, eventually, a necropolis built into the rock face to our right.

We were keen not to miss out on anything and wanted to make it to the stadium before we made our escape back to the car. The stadium is to the far west of the site and, as you can see, unlike many of the other finds at Sagalassos, this is an area where you need to use your imagination.

Unlike the impressive stadium at ancient Perge to the south of Sagalassos, not much excavation has taken place here at this 1st Century AD stadium. We weren’t disappointed, however. How could we be in such surroundings?

Earlier in the day, as we were exploring the Sagalassos ruins, one structure remained sealed off with the entrance door firmly locked. Our curiosity was piqued, but isn’t there always something that is out of bounds on visits such as this?

Whilst returning to the car, the coachload of Turkish tourists who we’d seen earlier were just exiting that very building with their tour guide.

Very kindly, one of the women in the tour group called out to us to take a look inside before the guide locked the door behind him. The guide wasn’t too keen on this arrangement but the lady insisted that he give us a few seconds inside and we promised we’d just be a few seconds.

The Neon Library was built around 120 AD and archaeologists uncovered it between 1990 and 1992. The library was founded by Titus Flavius Severianus Neon who was a member of one of the most prominent families in Sagalassos at the time. It was dedicated to his father.

The centre of the floor mosaic depicted a scene from the Trojan War where Achilles parted from his mother to head to war. This was destroyed by Christians in the 4th Century AD as it was viewed as a symbol of paganism.

Time To Leave The Sagalassos Ruins

We’d done it! Just in time, before we were really exposed to the elements. We thanked the woman who had seen fit to make sure we didn’t miss out on this corner of Sagalassos and walked briskly back to the car.

The following day, on the way home, we would make the minor detour to Burdur Archaeological Museum. We weren’t done with Sagalassos just yet…