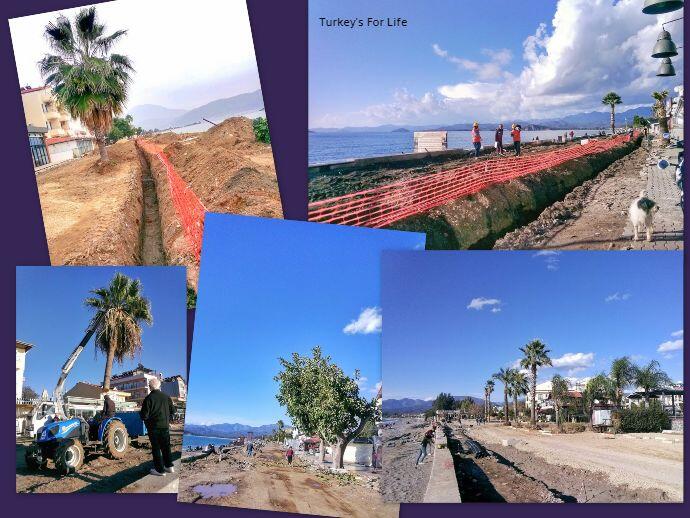 Welcome to our first Fethiye news roundup of 2021!

Wonder if we’re starting as we mean to go on (and continuing as we usually do) by way of being a few days out of kilter.

Because, here we are, bringing you news of January in Fethiye, when we are already a few days into the month of February.

Ah well, most daily life is out of kilter at the moment, isn’t it? So the blog might as well follow suit. Let’s see how 2021 is panning out so far…

Hit The Ground At Snail Pace

It’s always the same with a new year isn’t it?

Resolutions and goals and all the great things that we’re going to do – except our first few days of 2021 in Turkey were spent under curfew.

No New Year’s Day walk to blow away the cobwebs. No getting out there straight away for that first run of 2021 and kickstart the year.

But no complaints either. We knew it was happening, so, as far as we were concerned, our Christmas and New Year period continued until January 4th when curfew ended.

Extra days to finish all the foodie boozy treats that were in the fridge.

So, for us, the ‘first’ day of the new year was January 4th. Straight out of the door with gusto for a morning run.

And then, in the afternoon, a stroll down to the Çalış Fishermen’s Coop.

We ordered a takeaway balık ekmek and wandered over the bridge to eat our sandwich on the beach.

New Year is where we usually like to hit the ground running with the blog, too.

Well, as far as new articles are concerned, if you follow us regularly, you’ll know it’s been a slow start.

No laziness, however. There’s been lots of background tech things to do – and there still is – which have consumed many of our days.

That area of the blog is Barry’s (literal) domain. So, for me, in the meantime, I’ve been editing photos and planning upcoming articles.

They’re all in the pipeline, now. And hopefully, they’ll be with you sooner rather than later.

We’ve got lots of ideas for how we want to move forward with the blog, too.

But, as we’re all too well aware by now, current circumstances mean we remain flexible.

And plans are kept vague rather than concrete. We’ll go with the flow, one day at a time!

Weather To Match The Times

If daily life is a bit topsy turvy at the moment.

So is the Fethiye weather. It was looking like winter would never come. Warm sunny days were what it was all about.

And then, last week, the storms arrived.

The snow fell on the higher ground. We got rare frost here at sea level. And a RealFeel of -3 on a couple of days.

There were floods in some areas. Storm damage in others.

The usual power cuts that happen during a storm. For animals in the icy, snowy higher grounds, the belediye collected fruits and vegetables from the local storage area and scattered them around the hillsides.

It was winter. We thought…

And then we wake up on February 1st to temperatures akin to late spring. And a weekly weather forecast that shows similar temperatures for the full week ahead.

A post-storm afternoon stroll along Çalış Beach in short sleeves – and a sandy stroll at that.

Çalış Beach is a mix of sand, shingle and pebble. But get yourself down there after any storm and you can enjoy smooth, compacted sand for a day or two.

And then, as if from nowhere, the shingle and pebbles are back. A true wonder of nature.

It was so lovely to walk right along the seashore a few days ago, feeling the warmth of the sun and letting our feet sink into the sand.

But there was also a practical reason for our choice of route.

On that particular day, there were just too many holes, diggers and trucks to negotiate along the promenade.

Lots of you will know that Çalış Beach is undergoing a huge facelift at the moment. Above are just a few of the photos we’ve taken throughout January.

It’s more than just a facelift. A whole new infrastructure, too.

So a lot of the work so far has been all about digging holes and trenches and laying new pipes.

At the far end, where Letoon Hotel is, there’s more of a clue of the light at the end of the tunnel.

Builders are now working on the beach wall. Concrete has been laid. And it looks like this stretch of the promenade is being prepped for paving.

We’re really looking forward to the day when we can have our first jog along the full stretch of the new promenade.

If you follow us on Instagram, we are posting regular photos to our Instagram Stories and archiving them in our ‘Highlights’ that you can see in our profile.

Some of the background work we’ve been doing on the blog has involved a trawl through the archives at previous articles.

At a time when travel isn’t the easiest, it’s been lovely to look back at past travels and start to tempt the brain towards looking forward to future jaunts.

One of the articles I spent a bit of time going over was from when we visited a school in a village called Doğansu in East Turkey.

The whole set up for this school was an example in people making the most of a difficult situation. Students and teachers alike.

A real insight for us, as foreign visitors to the area.

Whilst, at the same time, being mesmerised by the landscapes around the Ağrı Province.

On our Facebook page, we took followers back over past travels with our springtime walk from Bodrum to Gümbet.

And with a wander around the ruins of Ephesus.

And then, as a build up to our latest travel article on the blog, we shared our Perge ruins and Eğirdir posts.

The reason for this was because our new article was an exploration of the ruins of Antioch of Pisidia.

These ruins can be found just northeast of Lake Eğirdir and they are the site of St. Paul’s Christian preachings.

He travelled there from Perge in the south.

A quieter, slower pace of life means more time in the kitchen.

In January, we updated an old recipe that had been on the blog for sometime because we’d recently made the dish again (it’s a Christmas/New Year favourite).

We’ve got two more recipes coming up for you in the next few days. And they’re something a bit different to the recipes we usually do.

Obviously, we’ve been cooking lots of other favourites, too.

Throughout January, we’ve indulged in winter comfort foods. Izmir Köfte, broccoli soup and wholesome tarhana soup have all been on the menu.

We still can’t go to grounds to watch any sport, of course.

So, sometimes, it does feel like we’re following from afar. A bit detached. We are following along, though, as best we can.

Fethiyespor football team still seem to be enjoying the lack of crowds when it comes to results.

They were top of the league for a while and slipped down one place yesterday after a 1-1 draw.

Not such happy days for the Lokman Hekim Fethiye Belediyespor Basketball team.

It’s their first season in the Süper Ligi and it’s clearly not been plain sailing for them. Unfortunately, they’re bottom of the league.

We all know it’s difficult times and for anyone organising running events. It’s a logistical nightmare!

Some events are going ahead, however, and on April 3rd, Fethiye will (hopefully) play host to an ultra marathon.

Social distancing won’t be a problem with this one as most runners will be spread out over a 50km route.

If you’re interested in any events in the coming months, obviously, they’re subject to postponements and cancellations at the moment. But some are now open for registration.

We’re keeping an eye on proceedings and updating our listings of running events in Turkey whenever we see any changes.

And so we come full circle.

We can’t get balık ekmek at the moment from the fishermen’s co-op. But that doesn’t mean we can’t support local businesses and enjoy a takeaway lunch on the beach.

Our most recent takeaway was a çiger dürüm (liver wrap) from the consistently good, Çalış Kebabs & Dürüm.

Of course, we’ve also managed to sit at the beach and negotiate our way through takeaway fish, chips and mushy peas from nearby Charcoal Palace, too.

If you’ve eaten their food before, you can imagine how full we were after that!

As with everywhere else in the world, it’s tough, tough times for the hospitality industry in Turkey, at the moment.

For the places that are open for takeaway, lots of people are trying to do their bit to support them.

Hopefully, everyone can open up again properly, sooner rather than later.

Let’s see what the rest of the month brings…

In the meantime, we’ll continue to live the slower pace of life we’ve lived since last March. We’ll pass away a few minutes a couple of times a week with our online jigsaws. We’ll post to social media.

And, of course, we’ll be adding articles to the blog.