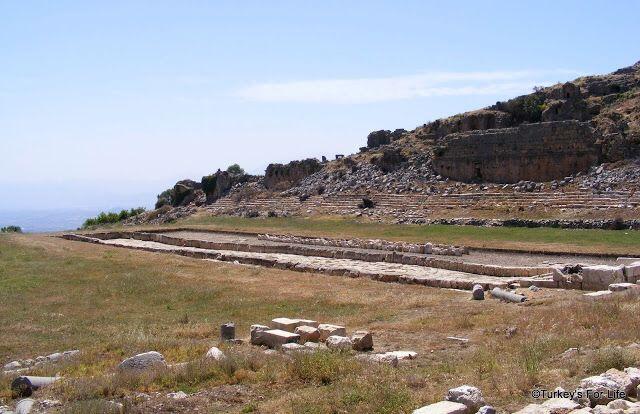 My dad has been out for a visit and he returned to the UK yesterday. Over the years, we’ve been everywhere we can think of that a day trip from Fethiye allows with my dad and so when he comes now, we leave it to him to choose.

He can either have a chill week around the pool and the bars or he can choose which day trips he wants to do. Every visit he does (either once a year or twice a year), at least one of the day trips has to be to Tlos and Yaka Park.

He doesn’t really like hot weather so Yaka Park is perfect for the coolness and he loves rugged countryside – especially with a few ruins thrown in – so Tlos meets those requirements too.

We had a great time up there a couple of days ago.

If you’ve been to Tlos before and you show a keen interest in your ruins, then you’ll probably spot from these photos from Friday that the scenery is looking a little different.

That’s because there have been more archaeological digs going on over the last two or three years.

We didn’t do any exploring on Friday because my dad and his friend are not very mobile so we just stopped at the side of the road in the car to get a couple of photos.

The area you can see in the above photo has just been uncovered – it was submerged in scrubland previously.

It’s a shame it was so hazy on Friday because it’s an amazing view of the Xanthos Valley from here.

Why do we love Tlos so much then?

Well, you’re surrounded by the huge Akdağlar mountain range and even though you’re so high up at Tlos, you are still in the foothills, overlooking the beautiful Xanthos Valley, yet still dwarfed by the mountains.

There are countless amazing places to see in the world that we have still not seen (and possibly will never see) but the Xanthos Valley area is right up there (for us) for what we’ve seen of the world so far.

That sets the scene then. What’s there?

A Roman fortress on top of the hill overlooking the whole valley. Roman baths with equally stupendous views, theatre…you can see most of these from the road as you drive along but it is worth parking up, paying the entrance fee and spending at least a couple of hours there.

Climb up to the top of the fortress or explore the baths and the theatre. Even if ruins aren’t your bag, these ruins are in a breathtaking setting.

One of the very famous guidebooks for Turkey says the Lycian rock tombs at Myra are in the most dramatic setting – but, having visited both the (beautifully intact) Myra tombs and the tombs at Tlos, we strongly beg to differ.

If you’re staying in the Fethiye region, there are different ways you can get to Tlos.

We said yesterday that you can spend an hour or two round the ruins here and then continue on up the road to Yaka Park for a cool down, refreshment and a bit of food. If you’ve got your own transport, that is possible.

Other ways to get to this area are as part of a jeep safari or as part of a dolmuş tour from the dolmuş station in Fethiye.

The jeep safari (an experience in itself – not for me but loved by many) and the dolmuş tour also take in Saklıkent Gorge, which is just down the road, on the same day.

If you want a pit stop tour of the area and you don’t want to drive, these options are probably the best.

If you want a good mooch around, without time limits, then you need to get yourselves up there.

Update 2011: The excavations mentioned in this post revealed some intact statues which you can see in this post about Fethiye Museum.

How To Get To Tlos & Saklıkent Gorge From Fethiye