It was 2005 and we were in transit from Alexandroupoli in Greece, heading back to Istanbul by bus. Traffic was bad and it had been a long journey.

So, after crossing the border into Turkey, the bus driver pulled to the side of the road and gave us an hour’s break to stretch our legs.

View Alexandroupoli to Tekirdağ in a larger map

All we knew was that we were now in a Turkish seaside town, overlooking the Sea of Marmara, and the town was called Tekirdağ.

Our knowledge ended right there.

We got off the bus and headed along a not unpleasant coastal road – a coast road that was lined with scores of köfte restaurants.

Why so many köfte restaurants? Nothing for it then but to try some köfte. And we did. And it was the best köfte we had ever tasted!

When we eventually got back to Fethiye, we were chatting with a Turkish friend and enthusing about the number of köfte restaurants in Tekirdağ and how tasty the köfte was.

“Well, you were in Tekirdağ,” he said, with an almost confused look on his face.

“Riiiight…And what’s so special about Tekirdağ?”

“Tekirdağ Köftesi! Didn’t you know Tekirdağ is famous all over Turkey for its köfte?”

Ahh, right. There are so many places in Turkey that are famous for their regional dishes.

Looks like we stumbled across one of those places accidentally. We didn’t have a clue.

But, lucky us…and if you do ever find yourself up that way, make sure you stop off to try some. It’s a must!

Okay, this recipe is not going to be an exact Tekirdağ köfte recipe for a couple of reasons:

Of course, we can still make a fabulous Tekirdağ Köfte here in Fethiye…it just won’t be quite the same as the real thing made up there in Thracian Turkey.

Unlike the perhaps more familiar circular shape in our basic köfte recipe, Tekirdağ köfte is rolled into sausage shapes.

We make this for barbecues when we have friends over and everyone agrees that it’s our best attempt yet at getting the texture just right.

If you make a lot of homemade köfte or burgers, you might have noticed we haven’t included breadcrumbs or beaten egg in this Tekirdağ Köftesi recipe.

That’s because we are looking for a lighter texture so the kabartma tozu and the semolina work perfectly in lightening the meat.

As for the addition of süzme yoghurt, a friend told us about this. She said it makes a really smooth texture and she prepares köfte like this for her Turkish husband – he loves it so we had to try it for ourselves.

And if you’re wondering why we use medium fat minced meat rather than low fat; well, we always used low fat until we had Turkish friends round for a barbecue one time.

We produced our köfte, our friend placed it on the barbecue and immediately announced to everyone that Barry and Julia had bought the wrong meat!

Orta yağlı is the way to go for good quality köfte. So that’s what we buy now – we’re not arguing with Turkish barbecue experts!

Once your Tekirdağ Köftesi is cooked, what are you going to serve it with? Hmm, Turkish rice goes well.

Any of our summer barbecue meze dishes would go well… But we’ve said it before and we’ll say it again. Köfte (of any variety) goes so well with piyaz. A taste sensation!

We’ve enjoyed köfte and piyaz meals all over the place: when we were a little bit lost in Edirnekapı, when we needed a (very) early lunch in Eskişehir and, of course, Topçu Kebap in Antalya.

Why not enjoy it at home, too?

We’re always wanting to convince our friends that this is a perfect combination, so we serve our Tekirdağ Köftesi with our own Antalya Usulü Piyaz recipe.

Mmm, two of our favourite Turkish regional recipes together on one plate.

Well, as far as we’re concerned, heaven is a plate of barbecued Tekirdağ köfte with a side serving of piyaz.

If you’ve never tried it before, give it a go and see for yourself – and hopefully, you’ll agree with us! Feel free to let us know what you think in the comments below.

So, we might not be in Tekirdağ, but we are undeterred. Let’s make Tekirdağ Köftesi. 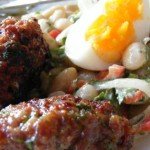 Turkey is awash with regional köfte dishes. In the east of Turkey, Doğubeyazıt Köfte is an interesting dish.

If you want to make more of a meatball casserole, try our classic Izmir Köfte recipe.

For all of our dishes, click through to our complete index of Turkish recipes.

I can't wait to make this tomorrow! Looks delicious. I have a question though about the measurement on baking soda - it says two sachets and the each sachet here in turkey is 15g / 1 tbsp. so should i be using 2 tsp or 2 tbsp?

Hi Jen, Thanks for your comment. Yes, use two sachets. That's equal to two teaspoons of the British size rather than the tiny Turkish ones. Not sure of the weight of them but they wouldn't make up a tablespoon. The main thing is that your Tekirdağ köftesi is light rather than heavy. :)

Thank you for this great recipe! One tip: the verb you want is "knead" and not "need" ;-)

Oh, wow, ha ha, thanks a lot. You've told that to two people who really like to get spellings correct and we both missed this when we were editing the post. Can't believe it's said that for so long and nobody noticed! :) We'll change it. Glad you like the recipe, though. :)

Amazing recipe you have shared. I always like kofte - thanks for sharing.

We love köfte, too. Glad you like the recipe. :)

thanks julia, waited on your reply before i ordered :-)