While we were in East Turkey, our hope was to try as many different local foods as possible. In Eskişehir, we were recommended to try their famous Tatar çiğ börek and it didn’t take many detective skills to hunt it down. This börek is everywhere! Out of duty to this blog, and out of curiosity, Barry tried it knowing the full consequences of his actions…he was to spend the rest of the day walking around Eskişehir with heartburn.

So what did we know of the foodie treats we were in store for as we headed eastwards to stay with our friend who is teaching in Patnos? We’d been forewarned that the east was more about the meat rather than light salads. No problem for us! We were looking forward to a protein fix. Meat in the west of Turkey is expensive and a treat for us, so this was our opportunity to indulge in meaty overload…and that’s exactly what we did. 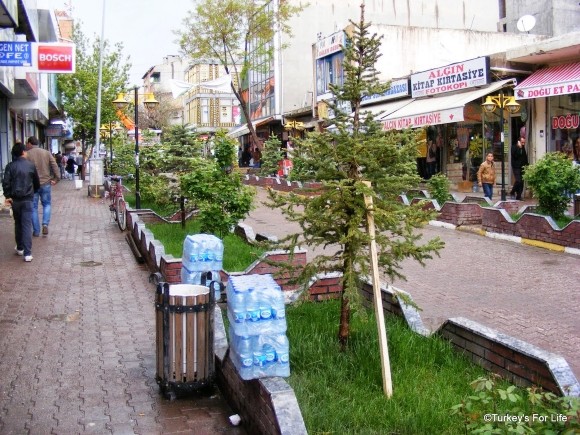 Doğubeyazıt is a small town that sits just southeast of nearby Mount Ararat (Ağrı Dağı). It’s famous for its small, covered bazaars selling goods from nearby Iran and Azerbaijan. It’s very famous as the town you pass through to head up the mountain road to the Ottoman palace, Ishak Paşa Sarayı – and, of course, this was the reason we were in the area. A longtime ambition was fulfilled that day. We’ve wanted to visit Ishak Paşa Sarayı since seeing it in the Nuri Bilge Ceylan film, İklimler (Climates), and we weren’t disappointed. But that’s a post for another day.

Today is all about the food. As is the norm for May in Eastern Turkey, the skies can turn from blue to black to blue very suddenly. Up at the palace, we were blessed with warm spring sunshine, but as we walked around Doğubeyazıt, choosing somewhere to eat, the rain began to pour. Now was not the time to be perusing the lokantas so, as the heavy raindrops pounded the street, we dove into the nearest place for cover. This was one of those occasions where the food gods must have been watching over us. 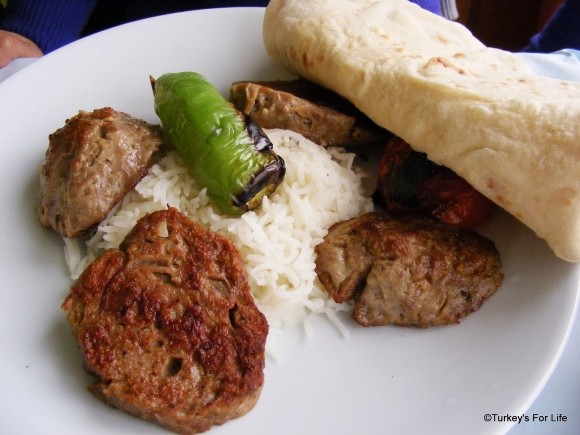 The köfte is boiled, sliced and grilled in butter

We peered into the bain-marie, eyeing the musakka and lamb stews. The waiter came over and pointed out some not-very-appetising-looking balls of meat. They were about the size of a tennis ball and brown-grey in colour, obviously boiled. He looked happy enough to see Turkish tourists (our friends) in the place and was even more gleeful when he spotted me and Barry.

“This is Doğubeyazıt köftesi. It’s traditional to the area and we make it here. It’s special because the meat isn’t minced but tenderised and compacted together. I really recommend you try it. The traditional way to eat it is as it is here, or we can slice it up for you and grill it in butter, too. Try both ways and the you can decide which is the best one.”

There was pride in the waiter’s speech, pride in his face and enthusiasm about the köfte. He looked at us expectantly. How could we not try it? How could we not try it both ways? Our friend ordered the sliced, grilled köfte and we went for the traditional, boiled version. We’d try a little bit of each other’s when we were served. 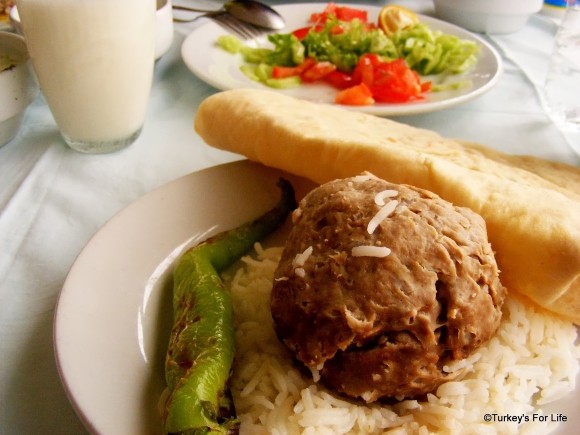 Every meal we ate was served with a long grain rice – different to the shorter grains you see in the west of Turkey – lots of flat bread, Antep Ezmesi and ayran. The waistlines were expanding by the day and we didn’t care – that was one to worry about when we got back home (not that we’ve worried about it yet – but that’s by the by, for now).

As for the Doğubeyazıt Köftesi: Don’t judge a book by its cover. We sampled each one. A slight difference in flavour due to the grilled version going under the grill in butter, but both were yummy! Which was lucky really because after we’d all finished, the waiter came straight over to us, the same expectant look on his face. Which did we prefer?

We assured him both were perfectly tasty – we can’t do white lies, even if it’s to make the person on the receiving end feel better – so we were relieved to be able to convey the truth. Of course he was pleased. An extra dousing of lemon cologne on the hands for these tourists as we left through the door of the lokanta to move on to our next destination.

Which version of Doğubeyazıt köfte would you have chosen? Or would you prefer to give it a miss?

Köfte comes in many variations all around Turkey. As well as classic grilled köfte that you will find in most restaurants, famous variations also include Izmir Köfte and Tekirdağ Köfte. In the Black Sea region, Akçaabat Köfte is revered.

This is a lovely sort of torture for me! I fell in love with Turkish food last year, starting in Goreme with home baked bread at the hotel, served with the most glorious jams, cherry and rose being my favourites. Then there were the tiny Manti, constructed by the young girl who served us, and some unnamed kebabs at a hotel buffet lunch- reddish orange with finger marks. There was firin kebab with yoghurt in Konya, twice in one day, and a wonderful selection of guvec in Selcuk. After that a week in Istanbul and then back here to Australia where I have been reading, plotting, chasing ingredients and making stuff like Sogan Kebabi, Patlicanli Kebabi, and some of your great recipes.

Thanks for the comment Judy. Always good to hear from people with the same obsession with Turkish food as we have. Hope you enjoy our Turkish recipes and good luck finding all your ingredients. :)

@ Ozlem's Turkish Table: Interesting isn't it? It was very plain - as in not spicy. I think I heard the waiter telling our friend it was boiled in milk. We always try to hunt something local out wherever we are. You don't know it you don't try. :)

This is really curious Julia, I haven't tried Dogubeyazit koftesi - is there any spices or anything else like onion or garlic in there? I would have loved to try both! Wonderful to have a chance to tuck in local food, glad you had a go!:)