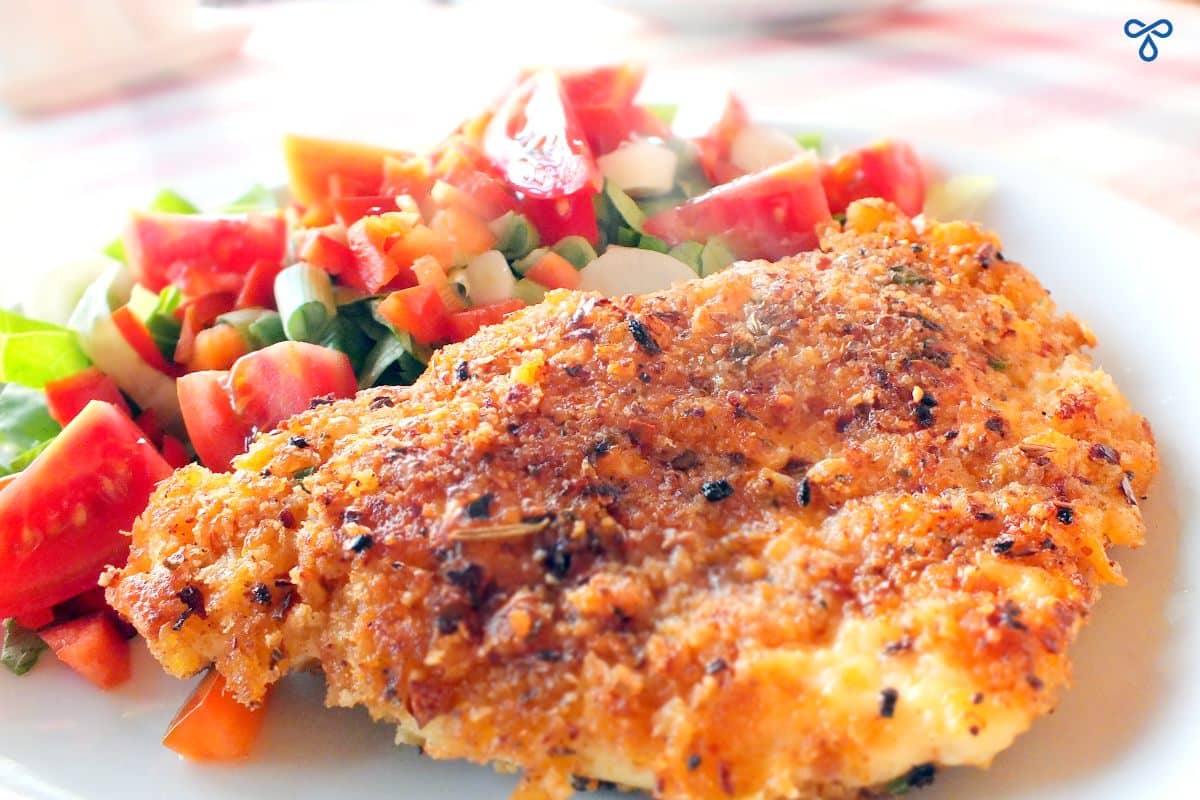 As the warmer summer months start to kick in and the temperatures rise, thoughts begin to turn to salads and meze dishes and main meals become a much more simple affair; some seared fish with salad, grilled or sauteed meat with a simple side salad.

Chicken schnitzel, or tavuk schnitzel as it’s known in Turkey, is such a simple dish – but so tasty, too, and the colours in the salad just shout out summer. It’s not a traditionally Turkish dish, of course, but it’s highly likely to make an appearance on the menu in many of the restaurants around Fethiye and, no doubt, elsewhere in Turkey.

I’m always reluctant to order it in restaurants just in case it’s dry – and there are so many other tempting dishes on menus – but Barry often takes the risk and plumps for it.

The photo below is the homemade chicken schnitzel offering at Lukka in Çalış that he ordered recently and I’ve had it since, too. Method, you see; I let Barry do the testing first, I try a little bit and then I know if it’s safe to order next time.

Schnitzel is traditionally a dish from German-speaking countries but these days, it’s eaten worldwide. The schnitzel (escalope) can be made from pork, beef, veal or chicken – and, in Turkey, chicken (tavuk) is commonplace.

So, whilst this is not, strictly speaking, a Turkish recipe, tavuk schnitzel is very much on people’s radars (and menus) and Barry’s recipe for chicken schnitzel is my favourite. You’re just going to have to trust me that I’m not just saying that just because I know he’ll be reading this…

Apart from the fact that this easy chicken schnitzel recipe is light and summery, it also uses minimal ingredients and it’s economical, too. One chicken breast makes two big, chunky, generous schnitzels.

You could even actually get three chicken schnitzel from one breast and have a serving of Turkish rice or a healthy bulgur pilavı with it to fill up on.

And you might have noticed that our chicken schnitzel recipe is described as rustic. Well, that’s us, you see? Where possible, we don’t like our soups to be too smooth and we love a chunky hummus rather than a silky paste.

When Barry decides to make chicken schnitzel, the traditional coating of fine bread crumbs becomes a slightly more robust, crunchy affair – as you can probably work out from the photo above – juicy breast of chicken encased in the middle.

Mmmm, let’s look at how to make chicken schnitzel from scratch 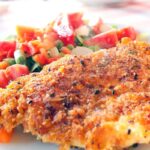 Lots of people deep fry their chicken schnitzel, and this is possibly where the problems start if the schnitzel is left in the fryer for too long. Rock hard coating and dry, tough chicken that you struggle to get your knife and fork through. We’re looking for a golden coating with a light crunch and a tender, juicy chicken breast in the centre.

As we’ve said, you can serve your chicken schnitzel with more filling accompaniments if you wish, but in these hotter months, you just can’t beat a side salad, dressed with lemon and olive oil.

The herbs and spices we use to to add to our breadcrumb mixture can vary – and sometimes, we also crush a couple of fennel seeds or a cardamom pod, too. In the preparation photo, you might also notice a bit of lemon zest, too. It’s all down to you and your imagination.

The preparation time for homemade chicken schnitzel is so short, as is the cooking time, and the finished product is sooo much tastier than those you pull from the box in the freezer. It’s a regular for us. Hope you enjoy it, too. Afiyet olsun!