Yes, just over 12 months ago, we wrote a blog post about how we stopped for much needed refreshment at King’s Garden Restaurant in Fethiye after we’d walked to the top of Fethiye Lycian rock tombs. The staff were just having a food break during their gardening activities and we were very kindly given some of their kısır to go with our drink – and very nice kısır it was, too.

From that day, we fully intended to go back for a proper meal; we’d go over summer, we said. We’ll take some friends up there, we said. We can go up there with my dad, we said. And summer came and went in its usual summery haze and we never made it. It doesn’t matter, we can go over winter, we said. And all of a sudden, here we are in April. Well, we got there in the end – we had meal at King’s Garden Restaurant last week. 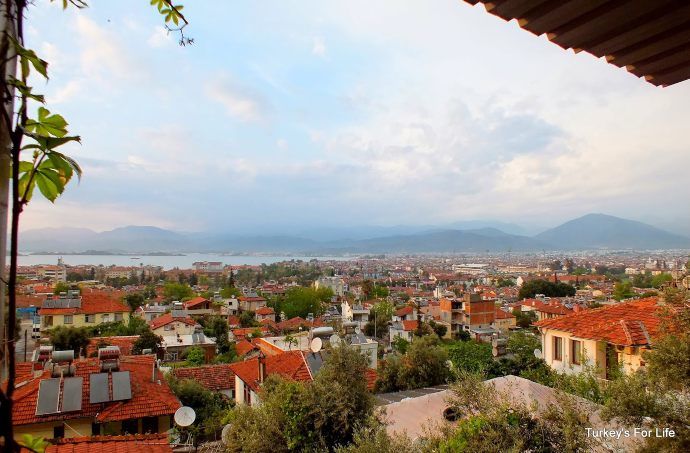 One of the views from King’s Garden Restaurant

The sunset from King’s Garden is one of its attractions and we’d love to show you a photo of that…but it was a stormy day when we went – no sun! However, the views of Fethiye alone are reason enough to get out the camera and take a few shots.

But what of the food? No point going up to a restaurant to enjoy the beautiful scenery of Fethiye if the food spoils your evening. Well, you know we must have enjoyed it, otherwise we wouldn’t be writing about it. There were three of us eating. Let’s have a look at what we ate:

A classic case of ordering too much, eating too much bread with it…and then wishing you’d left just a tiny bit more room for your main meal. Not to worry, though, we managed. Between us, we shared a cold meze platter with Antep ezmesi, olives, olive oil, aubergine salad, yoghurts and a very tasty celeriac and yoghurt dip. 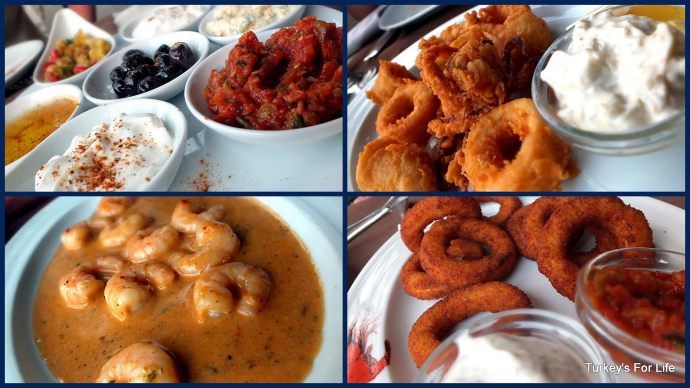 Hot meze dishes included (and we’re not just saying this) one of the best, if not the best, calamari dishes we’ve had in Turkey. So flavoursome and tender (bouncy calamari just does not cut it for us). We mentioned it to Salih, the owner. You could tell in his face he knows his restaurant’s calamari is good. All in the marination process, apparently.

King prawns were served in a creamy garlic sauce – you can see here where the too-much-bread-situation arose. Prawns eaten, juice mopped! And then there were onion rings. Now, these weren’t homemade but if you’re an onion ring fan (we are), you’ll know what they taste like and you’ll know they’re good.

Sweet chilli chicken, pepper steak and chicken and mushroom in a creamy garlic sauce. All meals were served with lightly roasted vegetables and potatoes, as well as Turkish rice and broccoli. 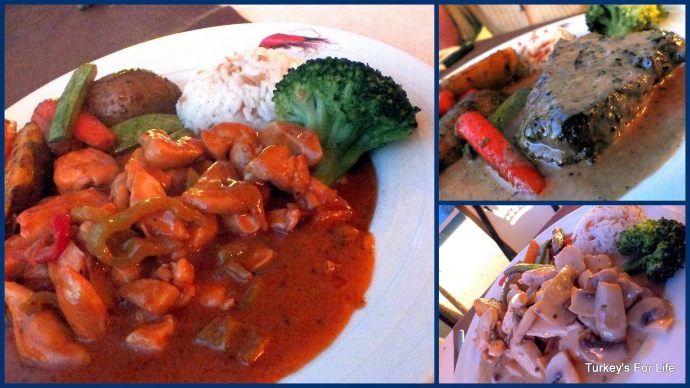 I had the sweet chilli chicken and can tell you it’s got a bit of a kick as well as its sweetness. Yummy! And perfect for me as I don’t like ordering a meal with ‘chilli’ in the title and then not being able to taste any chilli.

Barry’s steak was a decent sized slab, cooked medium and got the thumbs up, as did the chicken and mushroom. We usually sample each other’s food but, to be honest, we’d all overdone it with the bread and stuck to concentrating on the appreciation of our own meals.

It was a leisurely meal – you get a good gap between each course – and we had a couple more drinks afterwards so it was getting late by the time we left. It’s still cool at nights at this time of year so the windows are still in the restaurant. They’re removed during the summer season.

Next task: don’t leave it another year before we return to King’s Garden Restaurant. Maybe we can take our friends over summer…The best laid plans…

Always one of my favourite places to eat. The food, staff and restaurant are all excellent. A lovely place to spend a Sunday afternoon too; their Sunday lunch is fab!

Yeah we loved the food - more than we thought we would, actually. :) Glad it's got the thumbs up from you, too Jules. :)

Hmm, these nosh does look rather delicious, I have my eyes on that king prawns in garlicky sauce; thanks for sharing!

Well, if you ever get to come to Fethiye, we can try there Özlem. :)

Do you fancy swapping lives for a week? You get to eat out much more than me!

Ha ha, think we're just good at making it look like we're always out and about. Usually, we're just aimlessly wandering around Fethiye. :)