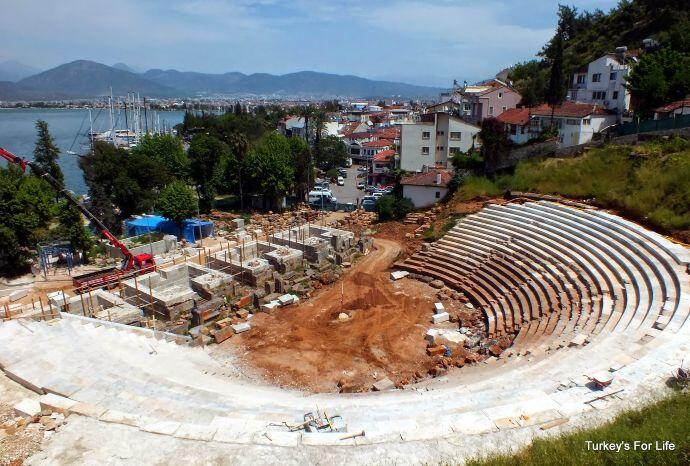 Yes, here we are, on May Day, writing our Fethiye update for the previous month of April. Well, at least it means we can cover the whole month because things have been pretty action packed around these parts right up until yesterday.

So, let’s get started with what we were up to last month.

There is progress. Since the opening of the new marina, paving along Fethiye harbour has continued and is now all the way along as far as the bridge entrance to the marina.

Further along the harbour, towards Fethiye, what was previously Shaka restaurant is now open for business as Mancero Kitchen & Bar.

All looks very posh and we’re yet to visit – but we’re sure we’ll be putting that right at some point…Best wishes to them.

Telmessos Theatre restoration continues and we haven’t updated about it for a while because it was at that stage where there was no real visible change despite everyone working hard on it.

A wander around the perimeter of the theatre last week and, as you can see, there are now new structures going up at the front of the theatre. These are presumably recreations of what was originally there so we’ll see…

April was the month where we did a post on our Paspatur favourite: we put the spotlight on Deep Blue Bar.

Much refurbishment has gone on there of late, so we thought it was about time we did a more up-to-date post.

As for eating, although we’ve been there many times for a drink, in April we finally got round to having a meal at King’s Garden Restaurant, near the rock tombs and overlooking Fethiye.

This was our post about the food at King’s Garden Restaurant.

Both Deep Blue Bar and King’s Garden Restaurant are on our Fethiye Eating & Drinking page.

Well, no one said it was going to be easy – PTT 1. Lig, that is. Last weekend was the last home match of the season.

Lots of disgruntled supporters who are unhappy with how things have panned out in previous matches decided not to bother going to the game, so it was a relatively quiet affair.

Of course we were there. No point missing the last match of the season after a long season of low points with a few very high points (like when Fethiyespor beat Fenerbahçe) thrown in for good measure. And, anyway, Fethiyespor won!

So where are we at right now? Ohhh those aching situations – on Saturday night at 7pm, it’s the last match of the season and Fethiyespor will play Gaziantep in Gaziantep. They must win.

In another match, also taking place at 7pm, Denizlispor will play Boluspor in Bolu. If Boluspor win that game, it’s curtains for Fethiyespor.

If Boluspor draw or lose and Fethiyespor win, it’s curtains for Boluspor.

Fethiye is a town in purgatory until Saturday night…Good luck to Fethiyespor!

April was the month of the Yeşilüzümlü Mushroom Festival, we had a lively Children’s Day at Beşkaza Meydanı, and it was also the month the 4th leg of the 50th Presidential Cycling Tour of Turkey of Turkey left from Fethiye for Marmaris.

That was yesterday afternoon. Mark Cavendish, he of British (and world) cycling fame, riding his bike through Fethiye. That’s where our knowledge of road cycling ends, sadly.

Bad weather conditions en route to Marmaris meant this stage of the race was neutralised for a while – but when they started to race again, Mark Cavendish won the stage and he’s now won three out of the four stages. The Tour of Turkey ends in Istanbul on May 4th.

So that was April 2014 in Fethiye. We’ve got lots of Fethiye posts coming up for you in May and more events, too.

If you don’t want to miss out on any events that might be happening in the are while you’re on holiday, be sure to keep an eye on our Fethiye Events Calendar – it’s updated regularly with any goings on we find out about.