Brussels sprouts are no longer that unwanted, yet essential, side of veg on your Christmas dinner plate. If you haven’t discovered roasted Brussels sprouts, read on!

“In your face, Brussels sprouts!” Upon conquering them, that pretty much summed up the feeling when eating them.

They were the final frontier of vegetables we just didn’t like – or buy – and we wanted to face our foodie foe and conquer it.

Brussels sprouts are in season in Fethiye at the moment. And now that feeling of smug victory has become a feeling of affection.

We no longer look at them with an eye roll as we pass them on the local markets.

No, it’s that familiar feeling of glee at once more seeing an old seasonal friend with which to cook and experiment.

We buy them. We eat them. And we enjoy them.

Contrary to popular belief, Brussels sprouts are not just for Christmas! They’re a winter favourite.

We’ve experimented with different methods of eating them. Our sautéed Brussels sprouts with chestnuts and sucuk works really well.

But we’re both agreed that roasted Brussels sprouts are an absolute winner!

The sucuk and chestnuts experiment was our first real dalliance with them.

It was where we realised that Brussels sprouts recipes didn’t have to involve them being boiled to an almost yellow, bitter-tasting mush that was forced onto the side of your Christmas dinner plate.

No, we now know there is much more to Brussels sprouts (Brüksel Lahanası) than that.

And, as we’re in Turkey, we’ve added a Turkish twist so that our Brüksel Lahanası become a Turkish meze.

You can use them for your Christmas buffet table. Or you can remove the festivities altogether and just appreciate Brussels sprouts for the distinctive, tasty winter vegetable that they are.

In Turkey, there are two ingredients that are widely used in various dishes so we’re going to be using them for our two Brussels sprouts recipes:

With the first recipe, we’ll be roasting our sprouts in olive oil and a dusting of parmesan and chilli flakes.

Then they’ll be given their Turkish twist. A generous drizzle of yoghurt sauce.

You can then simply serve them as they are or you can place them on top of fingers of garlic-rubbed toast. It works!

And that’s just one of the ways of we love to eat our Brussels sprouts, these days.

For our other favourite Brussels sprouts recipe, we’re going to mix the olive oil with pomegranate molasses and then toss our sprouts in the dressing before roasting.

Roasted Brussels sprouts with balsamic vinegar is a very common recipe. These days, however, we use pomegranate molasses much more than balsamic.

We get a bit of a glaze and that lovely sweet sour tang of the molasses.

And then, what better than to finish off proceedings than with a garnish of fresh seasonal pomegranate?

But, you choose for yourself. Both recipes are tempters.

How do you prepare Brussels sprouts for roasting?

Very simply, all you need to do is wash your sprouts and them cut them in half lengthways. If you get any tiny sweet ones, leave them whole.

Some people par boil their sprouts but we roast them from raw. No need to peel any loose leaves away, either. They’re the best bits because they’ll go dark and crisp. 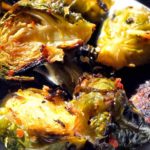 For The Roasted Brussels Sprouts With Yoghurt Dressing

For The Roasted Brussels Sprouts With Pomegranate Molasses

For The Yoghurt Dressing (The Turkish Twist)

For The Roasted Brussels Sprouts With Yoghurt Sauce

For The Yoghurt Dressing (The Turkish Twist)

For The Roasted Brussels Sprouts With Pomegranate Molasses

Whichever recipe you decide to follow, your Brussels sprouts will make a perfect addition to your meze table.

We just love the pomegranate and lamb combination, hence why we love to eat lamb when we make Gavurdağı salatası.

We have them sautéed with chestnuts and bacon. Haven't seen any in Bodrum yet.

Well, it was cooking them like that - but with sucuk in place of bacon - that converted us. I'm wondering if maybe we have a specialist grower in Fethiye. He doesn't have many on his stall at the pazar but they're always lovely.

. . and 'Bubble & Squeak' is just not the real thing without Brussels!

Ha ha, we love bubble and squeak and now we like Brussles sprouts, too, we'll have to make sure we add them to the recipe. :)

Delicious! I must say, I do like brussels sprouts and these are delicious ways to enjoy them - I can imagine how tasty they are on garlicky bread with yoghurt! I add them sauteed to my rice with chickpeas, delicious. Elinize saglik! :)

The Brussels sprouts worked much better with the yoghurt and garlic than we had anticipated. :)