As you’re no doubt aware (if you read this blog a lot) we’re all for promoting our local Fethiye markets, particularly the Fethiye Friday market.

The Friday market, in contrast to the Tuesday Market, is more of a villagers’ market that sells seasonal produce – and you’re never quite sure what’s going to be on offer from one week to the next. The joy of eating seasonally…

However, just because we’re passionate about the availability of seasonal produce, that doesn’t mean we have to like all of it. But we do make an effort, and, occasionally, we do arrive home with what, for us, has been more ‘challenging’ produce.

Broccoli and cauliflower used to be amongst the produce filed under “challenging” but they now make a regular appearance on our winter vegetable rack. Well done us!

But where seasonal vegetables are concerned, there was one hurdle as yet unconquered. We think it’s safe to say that in many people’s psyche – not just ours – Brussels sprouts (Brüksel Lahanası) are the final frontier in the world of learning-to-love-your-vegetables.

But now, all that has changed, too and we’ve realised that, Yes, You CAN Enjoy Brussels Sprouts…Possibly.

Yeah, first of all, every Christmas when these dreaded little green leafy balls made an appearance in our house when I was a kid, it was a case of, “Eat your brussel sprouts.”

Hmm, well mooching around the internet doing little bits of research, ‘brussel sprouts’ got the squiggly red line underneath. It appears ‘brussel sprouts’ is a very common misspelling. Sprouts hail from Brussels, therefore, they are Brussels Sprouts.

Anyway, now we’ve got that bit sorted, back to Fethiye and the winter vegetable that is Brussels sprouts. Because, imagine our surprise when we moved to the sunny Mediterranean Turkish town of Fethiye and we discovered that the dreaded Brussels sprout was there on market stalls to haunt us throughout the month of December.

Every child’s – and quite a few adults’ – Christmas dinner nightmare!

Because that’s all they were for us; balls of bitter greenery on the side of the plate that were never going to be eaten in a million years, but they were there because it was part of the Christmas dinner. Why did they have to be there? Who said?

And so, on moving to Fethiye, the realisation eventually sunk in that Brussels sprouts weren’t a specially-invented British Christmas nemesis. No, they really are a seasonal vegetable that people actually eat, lots of people enjoy them, too…and they’re for sale in Turkey!

So, the time came to conquer Brussels sprouts (or Brüksel lahanası as they’re called, here) and we did that in classic winter recipe fashion: Sauteed Brussels sprouts with chestnuts…with a Turkish twist.

Let’s make sauteed Brussels sprouts with chestnuts and add a bit of meaty Turkish flavour, too.

Perhaps the most traditional meaty ingredient that is often added to sauteed Brussels sprouts with chestnuts is bacon or pancetta.

However, we want our recipe to have a more Turkish flavour so we’re using sucuk; that famous Turkish sausage similar in flavour to pepperoni. In winter, we can go to the one market and buy our sprouts, chestnuts and our sucuk – it just makes this dish more local as well as seasonal. 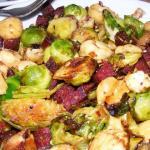 Sauteed Brussels sprouts with chestnuts is a dish often served with pork such as bacon or pancetta. Our recipe has been given a more Turkish flavour by using sucuk (similar to pepperoni). This dish can be eaten as a main meal or as a side to other meals.
Course Main
Cuisine Turkish
Prep Time 30 minutes
Cook Time 35 minutes
Total Time 1 hour 5 minutes
Servings 4
Calories 480kcal
Author Turkey's For Life

The key to this dish is not to let your Brussels sprouts go too soft or mushy. Sauteed Brussels sprouts with chestnuts and sucuk is quite a colourful dish and it looks so much more inviting when the sprouts are still holding firm and retaining their green vibrancy.

For even more colour, you can use red chilli peppers, too. Of course, you can skip the chillies altogether if you’re not a fan of heat in your dishes.

So there we have it. Sauteed Brussels sprouts with chestnuts and spicy Turkish sucuk.

This was the dish that conquered our dread of this little winter vegetable, so much so that we actually look forward to Decembers when Brussels sprouts make their appearance on the markets.

Brussels sprouts enjoy certain weather conditions that don’t always prevail in Fethiye so some seasons are more abundant than others when it comes to the purchase of this vegetable. That means, when we do see them on market stalls, we make sure to buy some lest we don’t see them again the following week.

Which side of the fence do you fall on when it comes to Brussels sprouts? Love or loathe? Is there a particular dish that converted you in the same way that sauteed Brussels sprouts with chestnuts converted us?

(You can find our recipe for sauteed Brussels sprouts with chestnuts & sucuk recipe in the Meat & Seafood category of our photographic list of Turkish recipes.)