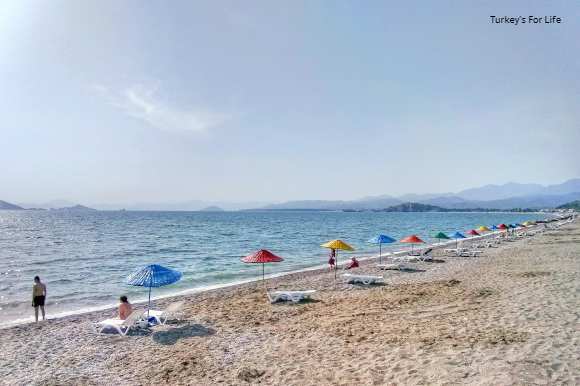 For our Fethiye news updates, I keep a little list in my notepad of anything and everything worth throwing into the articles.

Regular readers will know we had a mid-March update and, with April being the month where everything – and everyone – starts to wake up, it’s all been happening and we’ve got all sorts to tell you!

‘All been happening,’ dear reader, also includes a technical glitch with the blog just as this post was about to be published.

So now, here we are, in the first week of May. As these articles are time-sensitive, it is now all edited and up to date. All part of the joys – and frustrations – of blogging!

You know the summer season is about to kick in when the tractors appear on Çalış Beach to churn up the sand and shingle and remove any large boulders that wash up over the winter months.

All churned and cleaned, umbrellas resprayed and the main public area of Çalış Beach is now all good to go for summer 2019.

Great, then, that the local weather has decided to pick, just in the nick of time.

This is the section where we usually tell you what’s going on the world of Fethiyespor. And we will do.

But there’s also a bit of extra news for this update, too. Let’s get the football team out of the way first…

The leaving of yet another technical director meant a brand new one arrived to try and shake the team up and prevent relegation.

On Sunday 28th the home match against Pendikspor was a must-win (if we weren’t to rely on permutations) so it was a great crowd that entered the stadium to support the team along.

We were even visited by Seydikemer (a small town just along the highway from Fethiye) supporters who arrived to lend their voices to the already vocal Apaçiler.

It worked. Fethiyespor won the match 3-0. That meant interesting times for this weekend’s away game, however.

Fethiyespor played their kardeş takım (brother team), Bandırmaspor in the final match of the season.

Oh, how these two teams – and their supporters love each other. Unfortunately, both teams were in relegation battle, and, potentially, Fethiyespor could have been the cause of Bandırmaspor’s demise – or vice versa!

Here are the final league standings for the 2018-19 season. (Bottom three teams are relegated.)

Meanwhile, on the basketball court, it’s a whole different scenario. Basketball is huge in Turkey and the national team (aka 12 Giant Men) is pretty decent.

So is the Fethiye Belediyespor Basketball team, it seems. We follow them on Facebook but have never been to a match…yet.

The team are currently involved in some play off matches – a system we are yet to get our heads around – and, if successful, will earn themselves promotion.

Last week, they won two semi final matches in front of large home crowds and they play away next.

Best of luck to them – there are a lot of sports fans in Fethiye in need of a bit of a pick-me-up after the fall of their football team.

Yes, wrestling. We told you it was all happening, here. Watching the Olympics as a kid, Turkey always fielded a strong wrestling team and the success continues today.

But what has the national team of wrestlers got to do with our Fethiye news updates?

In the recent European Wrestling Championships in Bucharest, Turkey won the Gold Medal in the 57kg category.

The Turkish guy who won that medal was Süleyman Atlı and he’s from Fethiye! He had a homecoming a few days ago where he arrived to cheers from supporters at the Culture Centre.

Early Start For The Water Taxi

Who doesn’t love a little sail across the bay on the Çalış water taxi over to Fethiye? If you’ve never experienced the water taxi, it’s a must and is part of our list of what not to miss in Fethiye.

Usually, May 1st is your first sighting of the water taxi in transport action. However, an early start this season – by the end of April, the water taxi was already a good few days into its season – could mean the area is in for a bit of a bumper season. Fingers crossed, eh.

We’ve been to lots of our old favourites recently and also sampled some new watering holes and eateries. Some are newly opened and some are new-for-us places.

Recently, we updated our Cafe Park Teras article because they have now started to serve some rather tasty bar snacks, as you can see in the photo above.

An open kitchen means you can also see your food being prepared – always a comfort.

And, very recently, we added a new article to our list of posts about places to eat and drink in the Fethiye area. That article is all about Lokum Kokoreç.

We know it’s not everyone’s cup of tea but we’ve been here a few times already! They’re usually happy to give you a little sample if you want to try before you buy.

And, when you’re on your way home from Fethiye after a bit of shopping and you can’t decide what you want to eat for dinner when you get home… Those are the times when a balık ekmek seems perfect.

A quick hop into Mezgit Cafe for a battered fish fillet with crunchy rocket, tomato and onion all blanketed in a half bread. Yummy!

We’ve been to oodles of other places, too, of late. Those photos are in the editing queue and articles in my head.

They’ll make it onto these pages over the coming weeks. If you follow our Instagram Stories, you’ll have a rough idea of some of the places we’ve found ourselves at.

Meanwhile, the places above, and more besides, are all in our list of places where we like to eat and drink in Fethiye.

Whilst we’ve still never gone to the trouble of making our own mantı, Barry has found some ready-prepared mantı in our local supermarket that is really tasty. So this Turkish favourite has very much been back on the agenda.

If you do buy any of the ready made products, here’s how to prepare mantı at home. Time to embrace the yoghurt and olive oil combo.

A new recipe added to the blog was a bit of a broccoli celebration. This broccoli frittata was a favourite dish over the winter months. We’re very much enjoying the spring fruits and vegetables that are on Fethiye market, now.

Eggs and Easter and all that, we also shared our favourite Turkish egg recipes during this time.

We’ve been running more over the last few months and eggs seem to have become more of staple for us than they ever were.

Spinach and eggs, menemen and good old egg ‘n’ soldiers, perhaps, make an appearance on the lunchtime table the most often.

April 23rd is National Sovereignty & Children’s Day in Turkey. A day that Atatürk dedicated to the children – and don’t the children know it.

Head to Beşkaza Meydanı (the main town square) on this day and you’ll see what we mean.

April is also the month for the Yeşil Üzümlü Mushroom Festival.

For the second year in a row, we’ve not been able to get up there so we’ll make sure we get up there next year as the event continues to grow.

This year’s event was closed out by local band, Bluestone (who are now called Voyn Band). Incidentally, they’re now recording their first EP up in Istanbul so keep an eye out for that if you’re a fan of the group.

Keep yourself up to date with local and other events with our events calendar. There are links to relevant websites and Facebook pages if you click into an event that you would like more information for.

We still had occasion in April to share our article about surviving rainy weather in Fethiye due to the fact that it was absolutely tippling down for a whole weekend.

However, we’re happy to report that, bar one or two little blips, the weather is settling nicely, the winter bedding is now packed away under the bed and summer cotton sheets have taken their place.

And, last week, we even dared to don the shorts. Yes, the weather is definitely showing signs of summer!

As well as the Monday weekly weather updates on our Facebook page, you can also look at the current weather forecast on our Fethiye Weather page.

We’re now using a different service for our weather and you can view the current situation and scroll down the page a little to see the forecast for the next few days.

A Wedding And A Run

At the end of April, we’re usually on our annual springtime visit to Bodrum for the Bodrum Global Run.

This year, our friends got married in Fethiye on the same weekend so that gave us the opportunity to take ourselves off to a different running event in mid-April instead.

A lovely weekend was spent in pretty Datça whilst we took part in RunDatça 2019. We also went for a little wander the day after the run and we’ll be telling you about that in due course…

Every Saturday, we make an online jigsaw from one of our recent photos. You can see our most recent jigsaw, here, if you’d like to play along.

Earlier jigsaws are just below. The recent jigsaw is a beautiful meadow scene from Kayaköy when we did the Fethiye Kaya walk over the weekend.

And, as for our Instagram photo favourites: At the beginning of April, the town was bathed in the sunburst yellow of mimosa blossom.

A photo snapped whilst out for a run at the beginning of the month was our most liked of the month. Just shy of 300 Likes for our mimosa photo.

And so, we’re now digesting the fact that we will be watching 3. Lig football next season. A new world for us.

But before all of that, we’ve got a summer of friends, sun, running, blogging and adventure ahead of us.

And just a note, if you’re in Turkey over the next month or so; the holy month of Ramazan starts tomorrow. Here’s how Ramazan will affect your holiday if you’re in the Fethiye area.