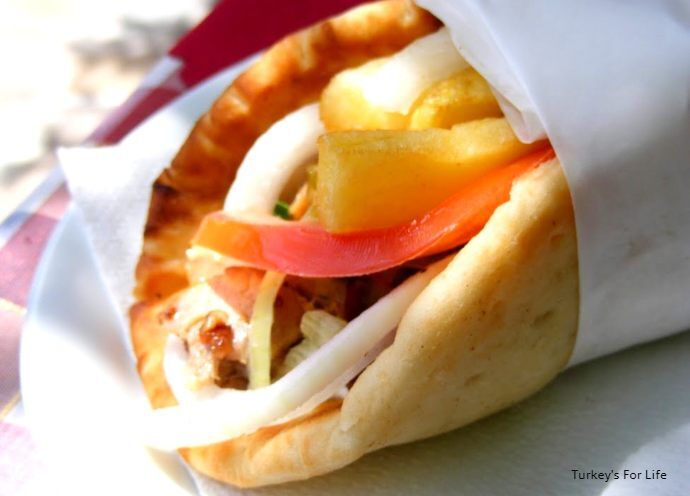 We mentioned in a previous post that we had a shock when we went to the Greek island of Rhodes a couple of weeks back.

After Meis (Kastellorizo), Rhodes Old Town was so crowded with tourists and it took a while to get used to.

While we were dodging and zigzagging through the narrow streets of Rhodes Old Town, we thought of a restaurant we stumbled across 4 years ago and somehow, Barry remembered where it was.

Duck away from one of the packed streets and up a narrow alleyway and you’re suddenly in the tranquillity of Captain’s Garden.

We had the whole place to ourselves – for a short while – while we ate an early lunch and enjoyed a refreshing Mythos Greek beer.

There’s only one thing to eat when you do the day trip from Fethiye to Rhodes.

Gyros is traditional Greek food. As in Turkey, when you visit Greece, you will see the spinning stick, rotating and grilling huge slabs of meat.

In Turkey, this is likely to be chicken or lamb.

In Greece, expect to see chicken and yes; pork! Gyros is slithers of pork (or chicken) served in a pitta bread with salad and a few chips (fries to those of you reading outside the UK).

Barry didn’t even linger over the menu. Gyros had been talked about for a few days preceding our little hop to Greece – that was what he was having. The pork version.

As for me, the rest of the menu succeeded in tempting me away from a pork fix. I went for two mezze plates.

Crispy, deep-fried rings of squid and what I thought was supposed to be a salad of baby new potatoes.

Except it wasn’t. It was a small oven-baked potato.

But, all was well because whatever the filling in the middle was – I couldn’t work it out, but it was good! – it worked really well as a dip for the calamari, too.

By the time we’d finished our lunch and enjoyed a beer or two, the restaurant had enticed more crowds from the busy streets and there wasn’t a seat to be had.

Time to make an escape to the shoe shop to go and purchase our traditional, handmade Greek sandals, before finding somewhere to while away the time with a refreshing frappe.