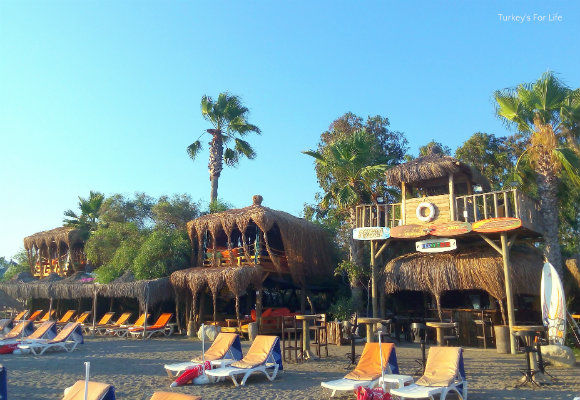 Another month has passed us by so time for our usual little roundup of what’s been going on in Fethiye.

Some random observations and a little bit of what we’ve been getting up to throughout this very hot July.

As usual, we’ll kick things off with the final section of Fethiye harbour. We’re still on canals and waterways.

Such is the development, our little walking route to Çalış now has to take a little detour because one of the canals now reaches all the way to the sea and, for the moment, there’s no direct way to get over it.

And said little detour now takes us towards the main road and to a construction. We have buildings! Well, one wooden frame, at least.

This has only appeared in the last week and is in a spot where you wouldn’t have thought was ready for any buildings just yet.

Yeah, well, what do we know?

We shall find out, all in good time, what’s going on here…

I can’t remember a time whilst we’ve been living in Fethiye when we’ve been up and out of bed so early, so often, because of the weather.

This is just so we can go for a run before the temperatures hit silly highs. Obviously, July in Fethiye is always hot – we’re on the Med.

But we’ve had dry heat in the form of a heatwave from Africa and we’ve also had high humidity at times, too.

The great benefit of the summer months, though is the Fethiye locals enjoying the balmy summer evenings.

Since the grass was laid along Phase 3 of Fethiye harbour, a trend has begun over the last couple of years.

Each night, families, couples and groups of friends descend en masse and lay out their picnics.

They stick around until the early hours. And then, as day breaks, they’re all gone again.

It’s lovely to witness – not dissimilar to the scenes we saw in Alsancak, Izmir, each evening.

Turkey being one of the most seismically active countries in the world, we often feel little tremors here and there in Fethiye (of course, we had the earthquake off Ölüdeniz in 2012).

In the early hours of 21st July, however, when the house started to shake for a prolonged period, we knew this wasn’t just a little tremor.

It was clear that towns and cities nearby were having a much worse time of it than we were. We just hoped it wasn’t anything too serious.

You’ll know the news we woke up to a few hours later. A strong, shallow earthquake had struck off the Marmaris coast and it looked like Bodrum and the Greek island of Kos had borne the brunt of it.

Two people lost their lives in Kos when a bar collapsed. Tragic enough that these things happen without elements of the British press going on their sensationalist field day.

Anyway, the Bodrum Peninsula is very much back in business.

Hopefully, Kos Town is dusting itself off, too.

It’s tradition. Barry’s birthday comes around and we escape to the paradise of Kabak for a couple of nights.

Hop on the dolmuş, lunch at the Olive Garden and then onwards to whichever camp we’ve decided to stay in.

Being the budget travellers that we are, the camp is often the one that pops up with the cheapest prices for that particular weekend.

As birthday weekend views go, well, we definitely couldn’t complain at this one.

In the past, we’ve stayed at Sultan Camp, Chakra Beach and Tree Houses, as well as the Olive Garden.

This July was somewhere new – for us. It’s actually a well-established camp. Blog post to come, of course.

For now, though, we’ll just leave you with the stupendous Kabak views in the photo above.

That was the view from our little wooden balcony.

A bit of reading, hiking up and down the hill, fighting to clamber in and out of the huge waves on the beach, a few beers.

That’s Kabak for us.

A return to what then seems like hectic life in Fethiye, feeling completely chilled and ready to take on the world again.

Social media is used for various purposes, these days. Some better than others.

However, Facebook is still great for its original intention of keeping friends in touch with each other.

For just over 9 years, we hadn’t seen these Wigan buddies. Their previously 9-year old son was now sitting in bars with us holding a beer instead of a milkshake.

The previously 5-year old is now 14, talking about his GCSE options. It’s always the young people of the world who make you realise the super fast passing of time.

Anyway, their parents are our Wigan buddies and it was just lovely to fall into person to person conversation with them, picking up from where Facebook had left off.

And it all got a bit busy at this point.

They were staying in Ölüdeniz but wanted to see some of our Fethiye haunts so they bobbed over to here a couple of times. Just an afternoon…that leads to an evening.

Amidst all the catching up we had to do, we took in the views from Cafe Park Teras, wandered around in the shade of Paspatur and did a little stop off at Deep Blue – well, of course.

Second visit to Fethiye. It was a particularly hot day so there was nothing for it but to get on the water taxi to Çalış and enjoy the cooling breezes.

An amble along the beach via shops we’d never been in before (our friends, their sons and their parents all like a bit of shopping, it seems).

We stopped off at Güven’s to say hi.

Then we continued to Jiva Beach Resort so our friends could have a look around, and then we headed to Surf Cafe to catch the sunset.

Our back garden locality and our friends were completely in awe of the whole place.

They wanted a ‘good proper döner‘ before we parted ways.

They had to get back to Fethiye, anyway, to get their dolmuş back to Ölüdeniz so it was back into town and straight to Yengen.

Oh yeah, and then a bit of live music back at Deep Blue.

Somehow suspect it won’t be another 9 years before we see them again in this neck of the woods!

And perhaps, next time, we’ll fit in some little outings, away from Fethiye as well as showing them more must sees.

All a bit quiet on the eating out front this month.

Saving our lira and kuruş for Kabak meant no little lazy let’s-eat-out treats.

We did write about ‘our guilty pleasure’ that is Charcoal Palace in Çalış and it seems lots of people agree with us.

If you’re counting the calories, well, just put that counting aside for one day and go and indulge.

We have still got other places to tell you about – as we said in last month’s update – so let’s see if we can get those articles done this month.

In the meantime, you can feed and water yourself at these establishments, amongst others.

On The Blog & In The Kitchen

Because our blog and our kitchen are intertwined, most of what gets chopped up on our chopping board and cooked or dressed is photographed, written about and eaten.

We’re still on salads and meze plates for hot summer days and July is barbunya season.

Barbunya season means a fridge with a huge serving bowl full of barbunya pilaki. And that prompted us to update our recipe for it.

We’re still plodding through our Turkish recipe section updating all of our recipes to make them easier for you to follow. And more beans have been on the menu, too.

After the barbunya, it was the turn of green beans in olive oil. So light on a hot summer’s day.

A new recipe has been added to the collection, too. More hot weather goodness in the form of frozen yoghurt.

Healthier than ice cream and a great way to play around with summer seasonal fruits.

We used strawberries and mulberries for our recipe.

Sometimes, an idea for a blog post pops up when you’re not even looking for an idea. One day, on our Facebook page, we just asked a random question, as we often do.

The meal you most look forward to when you’re coming to Turkey.

Wowed by so many answers, we couldn’t just leave them do disappear into the Facebook wilderness.

Your favourite Turkish foods are now all recorded on the blog.

Yes, no sooner as season finished and a new one is on the horizon for our local team, Fethiyespor. The groups have been drawn.

Fethiyespor are once more in the White Group. And the fixtures are out, too – well, the dates are. Kick off times tend top fluctuate early on in the season.

Anyway, first home match of the season is against Ankara team, Hacettepe on 27th August. We’d guess it’ll be an evening kick off just because of the hot weather.

As soon as we’ve sorted the fixture list and featured players, we’ll let you know. It’s a work in progress – almost finished…

Not really surprising that when you’ve spent a bit of time in Kabak and added some photos to Instagram that they’re gonna attract a few likes.

This photo is July’s clear winner. The waves were really strong on this day.

Even at the top of the hill, as we hiked down, you could hear the crash of the waves and then the drag of the pebbles as the waves retreated.

Mmm, the power of the sea. It was refreshing, too!

Oh, and while we’re on social media, we can’t let it go without mention that our Facebook page went through 20,000 followers in the month of July.

Thanks a lot if you’re one of those people!

Right, that’s our July life in Fethiye just about wrapped up. Bring on (the rest of) August!