Look up the English translation of the Turkish word, ‘meşhur’ and you’ll see it means ‘renowned, famous or well known.’ Well, then, guess it was finally time we sampled the köfte at this ‘renowned,’ establishment, Filibe Köftecisi in the Sirkeci area of Istanbul. 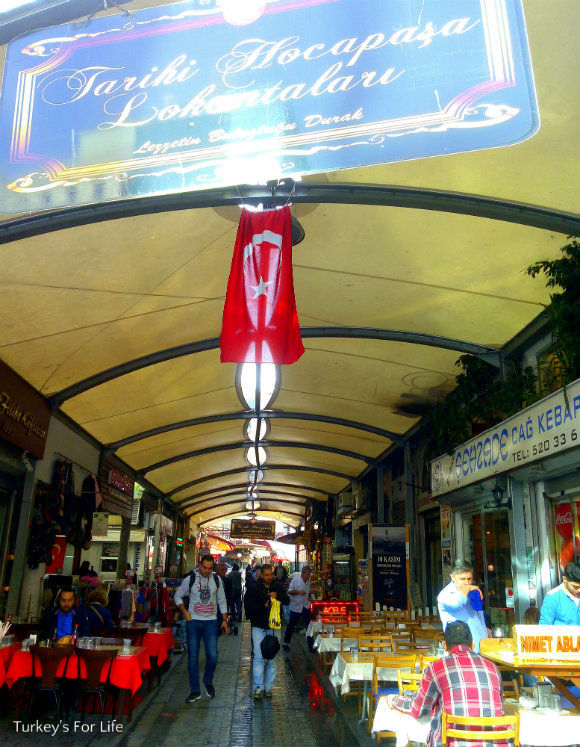 Hocapaşa Sokak in Sirkeci is home to many tempting eateries

We’d spotted Meşhur Filibe Köftecisi on a previous Istanbul visit when we were tucking into cağ kebabı at Şehzade in Hocapaşa Sokak. A glance to the opposite side of the pathway revealed a tiny outlet with just a few tables squashed outside. Proudly displayed in the window was the announcement that we were looking at Meşhur Filibe Köftecisi and they had been voted amongst Turkey’s top 10 köfte joints. Indeed, voted number 1 by one newspaper!

Well, that’s always going to pique the curiosity, isn’t it? Almost a challenge, as far as we’re concerned. “Come and try our köfte and you’ll see it’s the best,” is what it says to us. Could it really be that good? We didn’t get to put it to the test on that particular visit but it certainly stayed in our heads and we made a mental note to head there next time.

12 months later, in the city once more for the annual Istanbul Marathon, we unpacked our bags and then headed straight for Sirkeci and Filibe Köftecisi. Time to see how this köfte ranked for us… 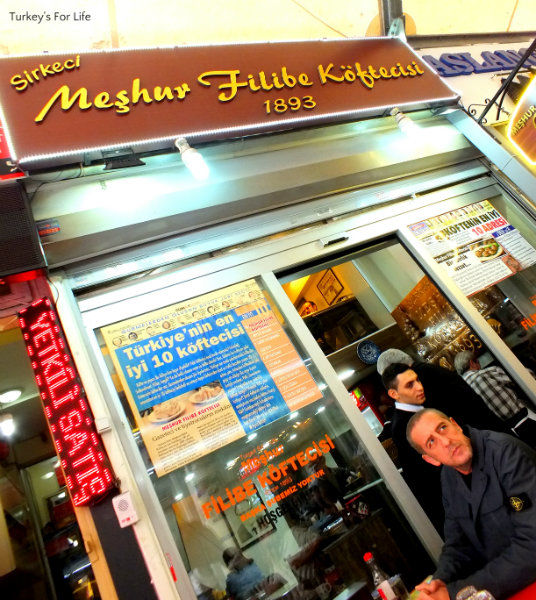 As you can see, we’re heading back to 1893, here. And, according to the story on the tables in front of you, it’s a tale of immigration. This köfte recipe is over a century old and was brought to Istanbul from Plovdiv in Bulgaria by Filibe Köftecisi founder, Mehmet Saltuh. We’re now in the fourth and fifth generations of the same family who remain owners to this day.

Apparently, fourth generation Münevver Erpak will eventually hand over to her children, Duygu and Cem Umut, who will continue the story.

So, we’ve got köfte with a history and a story. But so has Tarihi Sultanahmet Köfteci, not too far away from Filibe Köftecisi. Does history and a story necessarily make the köfte any better than anyone else’s? Hey, it’s good for drawing the crowds, isn’t it?

If you know us, you’ll know we’re suckers for a decent köfteci. At home in Fethiye, legendary Köfteci İmadettin has fond tales attached. And as for Babadağ Kafeterya; well he just does a damn good köfte ekmek!

Time to eat and time to see how the meaty morsels at Filibe Köftecisi compared. 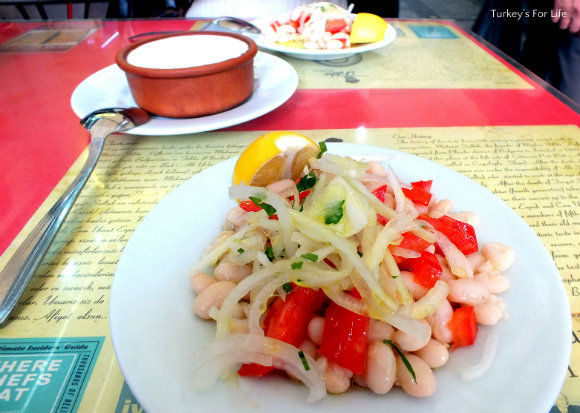 Piyaz is served to go with your köfte

We took our seats and a waiter rushed out. There’s no menu here. Just a grill inside, packed with row after row of köfte. The usta was watching over them all carefully as the waiter started to explain to us that this was a special meatball place. The best meatballs. Did we want salad with it.

Fact of life; wherever tourists go, there’s a waiter who will assume you have no knowledge of what you’re about to eat (true in some cases). Before you’ve had chance to register what’s going on, all will be explained in English and sometimes, that English doesn’t quite do the trick.

Yes, we wanted salad. Then we clocked some piyaz being delivered to another table. Oh, you know our love of köfte piyaz! So we asked for piyaz. “Yes, salad is coming,” said the waiter. Ahhh, right. Just so you know then; if you decide to go to Filibe Köftecisi on a visit to Istanbul and you’re asked if you want salad, you’re gonna get a serving of piyaz. Technically a salad – a white bean salad. It’s rare these two dishes are not served together. And together, they make one of our favourite meals.

So, we’ve got two servings of piyaz. A bowl of yoghurt appeared on the table. A basket of fresh crusty Turkish bread, cut lengthways through the centre. Perfect! We can only assume that it’s cut this way for people like us who love to open it out and make little köfte ekmek! Forks were also in the basket with the bread. We ordered drinks and waited for our serving of köfte. 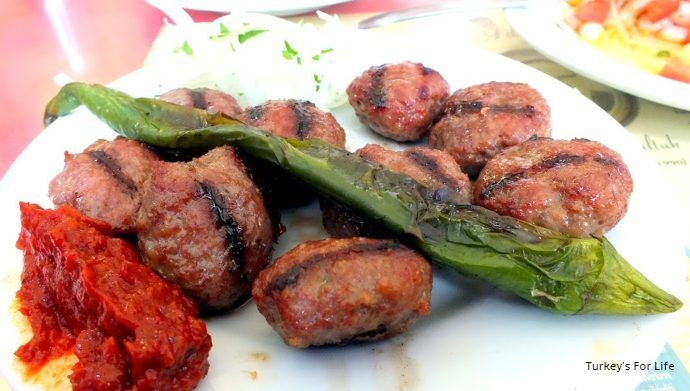 And then the moment of truth. The famous köfte of Filibe was placed before us. Thinly sliced raw onion, grilled pepper and a spicy paste, similar to the one we’d so loved years before when we ate at Durak Rümeli Köfteci near the Kariye Museum.

First things first; before even tearing off any chunks of bread, before trying the pepper, the piyaz or the spicy paste; one pure unadulterated köfte. To be fair, we can see what the fuss is about. It’s juicy and light with an almost velvety texture. Not undercooked or overcooked.

People were coming here for lunch, customer turnover was fast, waiters delivering plate after plate of köfte, the grill constantly refreshed with neat regimented rows of sizzling meat. We weren’t part of that fast turnover. We’d only just arrived in Istanbul. We were making this leisurely; making sure we made the most of the Filibe Köftecisi experience. And that’s just what we did. Was it the best köfte we’d ever had in Turkey? Ohhh, who can say? Food is memorable for so many more reasons than just the taste. We’d go back – but we’d go back to lots of places.

Most definitely, BacktoBodrum. :) And we got nine juicy ones at Filibe Köftecisi - as well as the bread and piyaz. A good few calories to burn there. :)