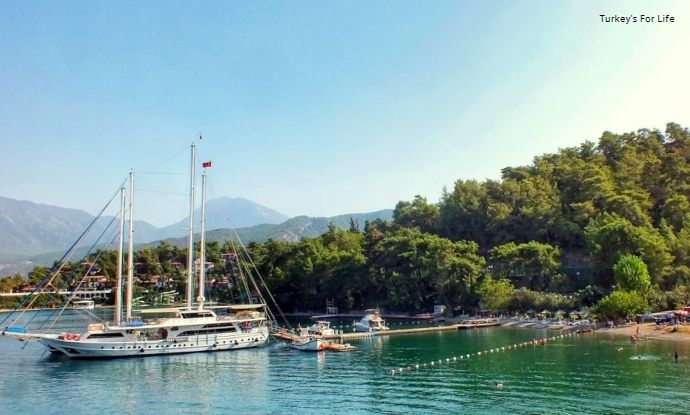 A long, hot summer. A long, hot summer of walks (and running) between Fethiye and Çalış Beach. It was too hot to walk much further. And a reluctance to use public transport meant we’d had a summer of being pretty much rooted to our immediate neighbourhood.

And then autumn came. And, on that first day of autumn, it was as if someone had pushed the Fethiye weather button to mark the change in season.

Gone is the intense summer heat and humidity. What we have now is cool mornings, hot (but not stifling) sunny days. And cool breezes.

Autumn, The Season Of Wandering

Not too much wandering just yet. We’re only a week into the new autumn season, after all. But we have managed a bit of beach research for our listings of beaches in the Fethiye area.

Along The Koca Çalış Stretch

Friends over from the UK love Surf Beach so we ambled down there to meet them and spent an afternoon enjoying the famous Koca Çalış breezes whilst watching the kite surfers whizz by.

And, it’s a long time since we’ve visited this beach but it’s an old favourite for us. A few days ago, we had a wander a little further along the Koca Çalış stretch and stopped off at Zentara Beach and Kitchen.

They’re still serving up their famous Turkish breakfast – but we were there just for a drink stop before we headed back.

Around The Fethiye Peninsula

Last Sunday, we did a bit of beach research by walking around the Fethiye peninsula. Beaches were late to open this summer, for obvious reasons, but we have had some changes around the peninsula by way of new names and set ups for some of the beaches.

After passing Aksazlar Bay and the grounds of Letoonia, we decided to make a refreshment stop at Alesta Beach. Whilst this is not a new set up, it’s new to us. And we really liked it. Chilled out and compact.

We’re glad we did soldier on because that meant we got to check out the latest addition to the peninsula beach scene; Sea Me Beach.

With Covid restrictions in place and only a limited number of people allowed on the beach, the guy on the car park gate had to radio through to check we were okay to go in to use the bar and get a drink. Fortunately, we were!

We’ll be writing articles about these places in due course. We know the season is coming to an end but we’re pretty confident Sea Me Beach will be around in summer 2020 judging by its huge popularity this year.

You can check out beach listings on our Fethiye Beaches page. We’re also hoping to add to our list of hikes and strolls around Fethiye as the autumn and winter progresses.

It won’t come as any surprise to you that all matches are being played behind closed doors. But at least the seasons are underway for our local football and basketball teams.

Whilst you can’t go to a match, we do have our Fethiyespor fixtures and results and the league table for the Fethiyespor football team up and running.

Naturally, it’s hoped that the team can gain promotion from League 3 by the end of the season.

Meanwhile, it’s such a shame that the basketball team, Lokman Hekim Fethiye Belediyespor Basketbol, can’t have supporters in their stadium. They’ve hit the big time and are newly promoted to the Super League.

Basketball is second only to football in Turkey. So this is huge for Fethiye who are going to be up against big name teams like Fenerbahçe, Beşiktaş and Galatasaray. You can follow proceedings on their Facebook page. Good luck to them for the rest of the season!

Remember when we launched our new page listing running events in Turkey – and then lockdown came and one race after another (after another) was cancelled…What great timing that was on our part!

Well, some running events – especially ultra trails – have managed to go ahead. And, amazingly, the Istanbul Half Marathon was postponed – but went ahead in September with over 2,000 runners. Our friend took part in the actual event and said it was really well organised – and she felt safe.

For us, we decided to show a bit of solidarity with the event and registered for the virtual runs. 10k for me and the half marathon for Barry. A little bit of normality and nice to feel part of a running event again, albeit virtually.

Which brings us nicely onto Fethiye’s charity event, Yaşam İçin Yarış. This is the event that raises money for the improvement of cancer care in Fethiye.

Obviously, the race can’t go ahead as it usually does this year – but lots of us will still take part. Walking and running in our own time and making a donation. Some people are collecting sponsorship, too.

We’ll be doing our run this weekend sometime.

If you do want to make a donation, it’s now become easier because there is a Just Giving crowdfunding page. Please help them reach their target of £5,000.

No gourmet dining for us. But we have had a few tasty snacks and meals at some of Fethiye’s eateries throughout September.

We’ve been out for lunch with Barry’s mum a couple of times. So these are always places in her locality. And we also made a new addition to the blog- a place we’ve been frequenting in the centre of Fethiye…

First up, earlier in the month, was a wander to Babzen Kebab in Çalış.

In life, there’s always the type of restaurant where, no matter how much you peruse the menu and tell yourself you’re going to order something different, you just know the inevitable will happen: ordering that same dish over and over again.

Over the last couple of years, that’s what’s happened at Babzen Kebab. They have a chef’s special Adana sarma. And it’s just too tasty not to order!

Spicy Adana kebab wrapped in lavaş and cooked on a skewer over hot coals. And then, as with Iskender Kebab, it’s topped with yoghurt, tomato sauce and hot butter. Dream food!

A yummy seafood pizza at Gustorante, and, of course, a balık ekmek at the fishermen’s cooperative along the canal and that just about wraps up our Çalış eating exploits.

In September, we made a new addition to ou list of places to eat and drink around Fethiye.

We’ll not repeat ourselves, here. But BüyükEv Pub And Kitchen is a great addition to the Fethiye eating and drinking scene. Click the link if you missed the article. And check out those burgers!

A busy time in the kitchen this month. Tis the season of making turşu (Turkish pickled vegetables) and preserves. We’re halfway through writing up the recipe for one of the relishes we’ve made. So keep an eye out for that.

We also added two new recipes to the blog in September. This Turkish muhammara dip is a real favourite but also an indulgence – so we have to resist making it too often. All the more appreciated when we do make it.

You can find muhammara in the meze section on our Turkish recipes page.

Our other new addition can be found in our section of international recipes. It came about because we buy a lot of smoked trout (füme alabalık) from our fishmonger. And we’re now also able to get sweet potatoes on a regular basis from the supermarket.

Our smoked trout and sweet potato fish cakes were born. Quick and easy to make. And totally delicious.

If you follow us on Facebook, you’ll know we share new online Turkey jigsaws on Wednesdays and Saturdays. Click the link if you want to complete any of them. This month, we’ve had scenes from Fethiye, the Xanthos ruins and the Cittaslow towns of Köyceğiz and Akyaka.

Despite lockdowns, various travel restrictions – and people’s reluctance to travel – we have still been plugging away with this blog. And sharing articles and photos on our Facebook page.

So, it’s with a big heartfelt thank you that you have continued to read and continued to contribute to our Facebook page. That page has now grown to a huge 30,000 followers!

Since March, we’ve been living in a world where, with regards to Coronavirus, anything can change at any time. Whilst writing this article, it has been announced that the UK has now added Turkey to the list of countries where self isolation is necessary on return.

Obviously, this will have an impact on local businesses as holiday companies in the UK immediately set about cancelling people’s trips.

We feel so sorry for those people who have suddenly lost their holiday, just as they were due to fly out. And, naturally, we’re gutted for the businesses here that rely on tourism.

If you are ‘flight only’ and your flight is still going ahead, keep yourself up to date with latest FCO travel advice and any information from your flight company.

Also, be sure the check with your travel insurance company that your insurance is still valid. If not, there are still a few companies out there offering the service.

As for the rest of October, well, who knows what that’s going to bring. No doubt we’ll be able to tell you at the end of the month…