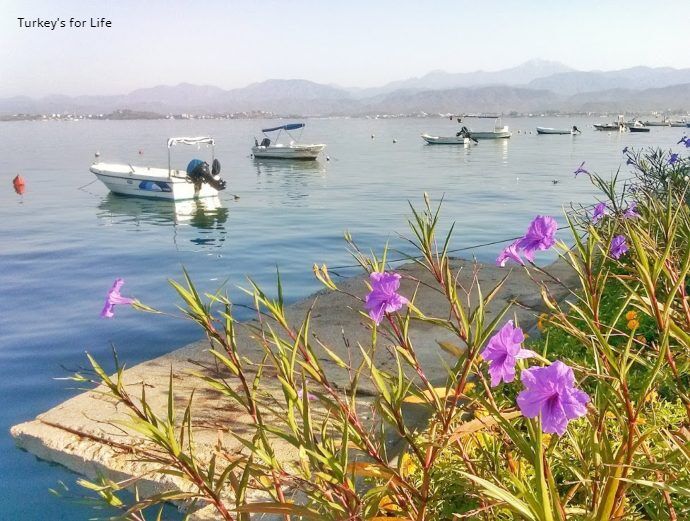 Phewee, it’s been – and still is – a long hot summer. August was a scorcher. While we wilted in the heat, more flights started to arrive from different countries around Europe, so, despite the fact that a few hotels chose to remain closed for the rest of the season, summer season in Fethiye looks relatively busy, considering the circumstances.

Whilst we’re still to use public transport like the dolmuş or buses, we’ve had friends over from the UK who just decided to book a much needed last minute holiday. September will see more friend arrivals, too.

It’s a topsy turvy world we’re living in at the moment, and, with that in mind, let’s have a look at what we’ve been up to in our days of wandering on foot between Fethiye and Çalış throughout August. There’s some bits of local news thrown in for good measure too…

Okay, not Fethiye, but Dalyan and Iztuzu Beach are still local to us – and many of us here follow news of Caretta Caretta developments.

Besides, a bit of good news is what we all need right now. And the good news is that in the month of August, it was announced that there had been a record number of turtle hatchlings. Great news for the Caretta Caretta population.

If you love a run or power walk along Fethiye harbour, chances are, you have used the stretch of running track from Şehit Fethi Bey Parkı and up as far as Boğaziçi Restaurant.

When it was first laid, it looked like this. And then restaurant owners started to make renovations in the new restaurants – and diggers and delivery vans had to park over the track to get the work done in those restaurants.

A bit of semi-successful patchwork repair ensued. And then the council decided to make the adjoining pavement into a cycle track. As you can imagine, the necessary workmen and machinery to get that job done meant the poor old running track took a right battering.

And it’s remained in the same battered condition since, gradually getting worse due to general wear and tear caused by runners and walkers pounding up and down there on a daily basis.

Well, if, like us, you are users and appreciators of this local facility, you will be pleased to know that our mayor, Alim Karaca, has announced the track will be relaid in November. We look forward to it!

Well, we’ve not had to type that as a heading for a while in our Fethiye news updates. But, lo and behold, we do have some Fethiyespor news for you…

Pre-season training is underway and the club are signing new players, occasionally. Updates are announced on the club Facebook page.

This season, Fethiyespor are League 3 (3. Lig) and Group 2 of that league. Fixtures are out and the first match is September 20th at home. We’re assuming games will be behind closed doors but at least we have some movement after the end of last season was allowed to peter out quietly.

As we said above, we’ve not ventured too far outside of Fethiye recently. Hopefully, the temperatures will cool a little for September – although it’s a hot first week we’re having – so we might be able to venture further afield on foot relatively soon.

So, ‘out and about’ has involved walks along the harbour into Fethiye and also in the opposite direction to Çalış Beach. A few little treats along the way.

Having friends over in the month of August meant a (these days) rare couple of nights out at Deep Blue Bar. We’re not the night owls we used to be so it was good to see Paspatur in action again after sundown.

We’ve not eaten out so much this month – just a couple of lunches with Barry’s mum and a treat or two for ourselves.

Where Barry’s mum is concerned, Gustorate always features. And we’ve never had a bad meal there so no complaints from us.

She loves their pasta dishes and we’ve worked our way through a good chunk of the menu by now. Çökertme kebab and beef burrito were our most recent choices.

The last day of August was a summer Bank Holiday in England. We might be in Turkey but we still like to nod to any bank holiday. Well, why not?

So, the end of the month was celebrated with a long, leisurely lunch at Motif where we indulged in falafel, pastırmalı hummus, lamb şiş kebabs and one of their famous infused gins.

Chances are, we’re not going to be doing any/much travel for the rest of this year so these are the treats that keep life ticking along in happy mode.

And nobody said happy mode eating out treats need to be huge meals. When you’re in the mood, what better than a balık ekmek by the canal in Çalış at the Fishermen’s Place?

Before we went to Çalış Market one Sunday, lunch was a favourite – kokoreç at Lokum. And, the following Sunday, it was the old favourite inside-the-market lunch: kıymalı patatesli (meat and potato) gözleme and a big frothy ayran.

If you follow us on Instagram and see our Stories, you’ll know we’re always cooking or preparing food in the kitchen. Much of that is time spent making favourite Turkish dishes.

We don’t photograph or video everything we cook and eat, so here’s just a few of the dishes we’ve made and eaten throughout August…

Green beans are still plentiful on the local markets so we’ve enjoyed green beans in olive oil – lovely and refreshing on a hot summer’s day.

Nectarines and peaches are also still stacked high on the market stalls so my favourite summer nectarine breakfast has been an almost daily occurrence.

And summer brunchtime just would not be the same without an ice cold frothy frappe.

Looking back through our archives on Instagram Stories, I can also see that kitchen time involved making a very tasty looking menemen and a homemade chicken stock which we used last night to make a domatesli bulgur pilaf.

It feels too hot at the moment to be eating hot bulgur pilaf so this was more of a summer version with some added extras that we served cold with chicken thighs and haydari. Leftovers for lunch so no doubt photos will appear in our Stories.

I also did a homemade pide again and used the rest of the dough the following day to make a tuna pizza.

And not made by us but by our neighbour – a gift of aşure. You can read more about that by clicking the link. At Christmas, we’ll respond in kind by making them some mince pies.

Work continues with gusto on the blog, both with new material and tidying things up in the background, too.

If one good thing has come out of this enforced slow down of usual daily life, it’s the extra time to really concentrate on improving this here blog of ours.

In August, we made an addition to our collection of Turkish recipes by way of çılbır.

The dish seems to be a love/hate thing for people and we fall firmly into the love category. What about you?

And then we also shared a salad recipe that we love to eat with meat such as lamb şiş. If you love salads that burst with flavour and texture, try our Gaziantep-style Gavurdağı Salatası.

Our other big new article has been such a long time coming and it’s one that we can continue to develop over time as we, ourselves, discover more about the area.

If you’re thinking of visiting the town of Kaş, whether for the day or for longer, here’s our guide about things to do in Kaş.

August was also the month where we gave our Fethiye must sees page a bit of an update. Again, that is an ongoing process. Just a few tweaks for now.

And we also revamped our Fethiye restaurants and bars page to make it easier to follow. Eateries and bars have been divided up into smaller neighbourhood areas and photos have been updated.

And, of course, we continue with our online jigsaws of scenes from around Fethiye and the rest of Turkey.

Throughout August, we’ve had some scenes from Kaş to celebrate the new article and we’ve also headed into the archives and had a couple of scenes from Odunpazarı in Eskişehir.

Our latest scene, however, is back to being a Fethiye jigsaw. This was the scene along Fethiye harbour on the morning of September 1st. We might not be venturing top far at the moment but with scenery like this that’s not too much of a problem.

So, we’ve headed into September in the midst of a late summer heatwave. Keep an eye on our Fethiye weather page if you’re due to come over. And know that ‘real feel,’ at least for this first week of the month, is a good few degrees higher than published temperatures.

And, just as a final note to end this monthly round-up: You may have noticed that we don’t talk too much about the current pandemic.

That’s because, as far as we’re concerned, we’re all dealing with the situation in our own ways with whatever guidelines are in place for where we live.  This is our personal blog and you can see from these monthly updates how we’re ticking along.

If you want more information for this area, the information is out there tenfold. No need for us to repeat it. This Facebook group is packed with information and articles.

Cases are on the increase in Turkey, and, just a few days ago, Paşa Kebap announced they were closing their doors temporarily as two members of staff tested positive.

This is not to scare anyone. It’s just a reminder that if you are coming over for a break, keep yourselves aware, look after yourselves – and others – and enjoy all that the area has to offer safely.