Fried chicken livers as a cold meze dish. We can’t remember where we were when we had this on our table at a restaurant one night – or when we were there.

Judging by that vagueness of memory, we know it was quite some time ago. And we know we were somewhere in Turkey. I think it was Dalyan. Barry’s not convinced.

Anyway, as the summer has progressed, we’ve been trying to be inventive in the kitchen to keep the appetites whetted.

This meze of fried chicken livers suddenly made itself present in the forefront of Barry’s mind.

He made an addition of black eyed beans. And, all of a sudden, we had ourselves a wholesome summer meze dish.

Something a bit different to our usual servings on the meze table.

It’s been a bit of a regular of late.

Ask someone if they like liver and it’s always a more extreme reaction than most foods you might talk about.

People either absolutely love a bit of liver. Or they absolutely hate it.

It’s not the prettiest looking food, let’s face it. But the strong flavour and the texture; our feet are firmly in the ‘love’ camp.

Just as well, because liver is widely eaten in Turkey.

In the UK, we grew up eating liver in onion gravy. Nice enough if it hadn’t been sat in the oven for hours on end.

But in Turkey, calf’s liver and lamb’s liver is divine when flash fried or cooked over hot coals.

Ciğer şiş, whether served on a plate or in a dürüm (wrap) is right up there amongst our favourite foods.

Fried chicken livers (tavuk ciğeri kavurma) are cooked with various accompaniments, as we’re doing in our recipe, and served as a meze or a main meal.

And then, of course, there’s the famous Arnavut Ciğeri – Albanian liver. Coated in flour and pan-fried. Perfect!

A recipe for another day.

What Are The Health Benefits Of Liver?

Aside from all the wonderfully tasty ways of enjoying liver in Turkey, you’re also benefitting your health by eating it. Double whammy!

The term ‘super food’ is often associated with fruits and vegetables such as pomegranates, spinach, eggs and sweet potatoes.

When we make our fried chicken livers, we’re also giving our bodies the benefit of:

And lots of other nutrients besides.

This evidence-based article even goes so far as to describe liver as possibly the most nutrient-dense food in the world.

We are by no means nutritionists but we have no food allergies or intolerances. So, for us, eating liver is a winner.

A Recipe For Fried Chicken Livers With Black-Eyed Beans

What I love about most Mediterranean dishes is that even the filling wholesome ones – as this fried chicken livers meze is – have a light, fresh flavour.

In the case of our recipe, we’ve got peppers and fresh lemon to add to the chicken livers and the black-eyed beans.

Remove the börülceli (with black-eyed beans) part and you have yourself a traditional Turkish dish of fried chicken livers with vegetables.

We add the beans for a bit of extra interest and because it’s summer. We want a meze dish on our table that is going to fill us but not overface us.

Oh, and of course, legumes are also a superfood.

How much more ‘super’ could you need in one dish? Well, let’s go for broke and add some garlic!

How To Make Fried Chicken Livers With Black-Eyed Beans

And that’s it. Once you have added your beans and stirred them into the fried chicken livers and peppers, remove from the heat and allow to cool.

Then you can add your dressing of olive oil and lemon.

You can do a taste test as you go along but be generous with both the olive oil and the fresh lemon juice.

Serve your fried chicken livers as part of your meze table.

On this occasion, we served the dish alongside Turkish garlic yoghurt with carrots, not-so-Turkish guacamole and squares of toasted bazlama bread rubbed with raw garlic. 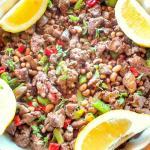 It’s all about mixing and matching! Afiyet olsun!