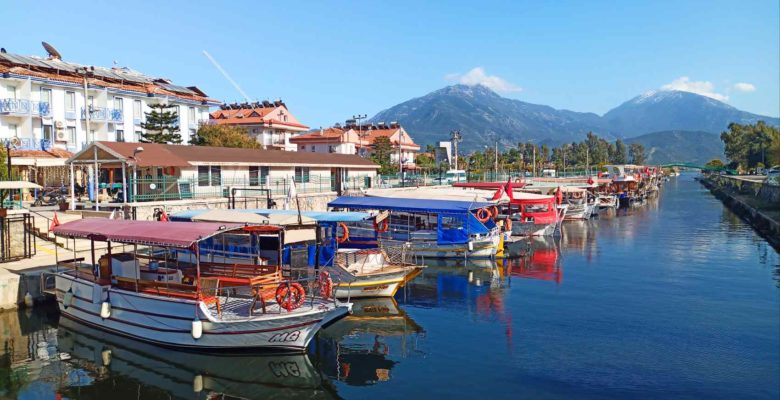 We’re still late with the monthly news from Fethiye – about the same as last time. So that’s still a month between updates. Not bad.

So, let’s get on with the news from the month of March. And the first part of April.

March; the month where Turkey commemorates the fallen in the Battle of Gallipoli in the First World War (March 18th) and thousands of women all over the country take to the streets to commemorate International Women’s Day (March 8th).

But what about us and our daily life in Fethiye? Well, it’s been a busy few weeks.

Sad news to begin with, unfortunately. Earlier in March, Fethiye lost a much-loved familiar face around the area; Durmuş Amca.

He’ll be sadly missed. But fondly remembered. We wrote this short blog post about him some years ago.

It was quite miraculous, really. Winter still had its firm grip over us with icy winds keeping temperatures way below what the weather forecasts were showing.

And then, just as Dalaman Airport opened to the first international direct flights of the summer 2022 season, the weather fronts changed.

All of a sudden, warm spring temperatures made themselves felt.

Those temperatures were very welcome!

And, judging by the clothing choices of some of the many people who have arrived for an early holiday so far, it’s just as well those temperatures changed.

There would have been a lot of very cold people wandering around, otherwise!

After two summers of limited and no tourism, it really is so lovely to see so many people here so early in the season.

The Turkish travel industry is predicting a record number of British tourists this year; most of whom will fly into Dalaman Airport.

Boats In The Water

Which brings us nicely onto preparations for the summer season, here in Fethiye.

On March 21st, as we were walking to the beach, we saw one of those happy sights that tell us preparations for the season are underway.

We filmed this short video of one of the Çalış Water Taxi boats being put back into the water after its winter hibernation.

Gradually, all the water taxis and day trip boats have made their way back to their mooring spots.

And, as you can see, the canal is once more full of waiting leisure boats.

Perhaps due to the fact there are so many people out so early in the season, the water taxi has already started its crossings to and fro.

May 1st is the usual start date. Hopefully, a good omen for the rest of the season to come…

It’s been a memory jogger; the return of tourism to the area.

By this we mean renovations, maintenance and just about any other construction work beyond and in between.

In the psyche, here, despite flights starting to Dalaman at the end of March, the tourism season is considered to begin mid April – and even May for some areas.

So that’s why, if you’re here already, or you’re due to arrive over the coming days, you’ll see lots of work going on in preparation for the summer season.

One such project is the little square along Çalış Beach. It’s home to some little kiosk cafes that have never been very noticeable when you walk along the beach promenade.

These kiosks are currently fenced off and work is going on to bring them up to date and, hopefully, a bit more prominent.

We can’t see properly what’s happening, but they’re definitely going to be taller than they were previously because we can see the frames being erected above the existing rooftops.

Return To The Greek Islands

March also brought the very welcome news that the seaways between Turkey and the Greek islands would once more be open!

So, this summer, the ferry from Fethiye to Rhodes is going to be possible again. On our last trip to Rhodes, we headed out of the old town for a change and visited the inland village of Koskinou.

From Kaş, we’ll be able to head over to pretty Meis. And from Bodrum, the Greek island of Kos will be welcoming visitors from the Turkish mainland.

We’re looking forward to a return to Greece. It’s been much missed!

And, whilst some places in Ölüdeniz are open already, this is one of the places where the summer season only truly begins at the beginning of May.

A couple of weeks ago, we did a comprehensive article of the best things to do in Ölüdeniz.

And we’ll be heading over there early in the season to see what’s new.

The promenade area of the beach was supposed to be having a revamp before the season started.

Thankfully, after the announcement, it was decided to wait until after this season finishes before work begins.

Not much eating out this month but still some great food had.

When we were going by bus to Antalya at the beginning of March, we went to one of our favourite eateries; Seçkin Lokanta.

Great Turkish food chosen from the bain marie where we’re always struggling to limit ourselves.

A revamp and a new menu here since we wrote our article about Gustorante.

The photos are in place and we’ll be updating our article soon.

Our little take on prepping for summer is getting articles like this up to date for people coming on holiday this year.

Until then, this is my new current favourite meal at Gustorante: The chicken taco salad. Lovely!

Other treats were a balık ekmek (fish sandwich) at the Çalış Fishermen’s Coop. We’d been waiting for the weather to be warm enough to sit by the water and enjoy it.

As soon as the weather improved, we were there.

Likewise with a sunny lunch at Cafe Park Teras. We love their panko chicken and it was such a long time since we’d had it.

A sunny day – a trip to Cafe Park Teras for lunch.

Just a simple bar lunch. Nothing gourmet. But perfect when you’re in the mood for it.

Cafe Park Teras have closed during the month of Ramazan to do a few renovations before the season starts in earnest.

The ups and downs in the life of a Fethiyespor supporter continue.

A 2-2 draw Sunday afternoon against a team they ought to have beaten – Modafen – leaves them further behind top place, Esenler Erokspor.

Just four matches left, this season. And we know by now, anything can happen…

The big new article of the last few weeks was our Ölüdeniz article that we linked to, above.

But we’re also constantly busy making sure existing articles are up to scratch.

In March, Britain celebrates British Pie Week, so that was the excuse we needed to improve and update our traditional meat and potato pie recipe.

Perfect comfort food. And the food we grew up on.

And, as we’re in the month of Ramazan, we’re also indulging in sunset fresh Ramazan pidesi; the special Ramazan bread that is made during this holy month.

This year, especially, with the inflation rate as it is, people are being extra careful not to waste food.

One way that Turkish families use up their stale Ramazan bread is by using it as a base for dishes like our Turkish et sote.

The spring seasonal produce was late to appear on the markets, this year, due to the cold winter weather. But it’s finally appeared.

Eating local, seasonal produce is one of the aspects of life in Turkey that we really appreciate.

It’s not been without controversy, this year, however, because of the inflation rates.

Growers and sellers all need to increase their prices.

And, in turn, this has made it very expensive (sometimes too expensive) for local shoppers who have vented their frustrations to local press.

Whilst it is still much more expensive than previous years, as the spring produce has become more plentiful, the prices have started to drop.

So, broad bean salad is back on the menu. As are lots of tasty Turkish aubergine dishes.

No green beans in olive oil yet, however. Green beans are still too pricey at the moment. We can wait.

If You’re Travelling To Turkey This Year…

Regarding tourism, there’s definitely a feeling of hope and optimism in the air for this season.

If you do come and you’re a regular visitor, you will notice on menus and other price listings that Turkish lira prices have increased by a huge margin since your last visit.

However, because of the exchange rate between the Turkish Lira and Sterling/Euro/Dollar, there won’t be too much difference in what you pay for your purchases.

Some prices will even work out cheaper. For example, in Pounds Sterling terms, the Çalış Water Taxi will be around 10 pence cheaper than it was during certain times of the 2020 season.

This is in stark contrast to prices for Turkish people earning in Turkish Lira.

Hopefully, a good season will help towards easing the financial burden on many of the local people, here, who work in tourism.