Antalya: to drive or not to drive; that is the question. Well, we’re big fans of public transport in Turkey and Fethiye to Antalya by bus  (and vice versa) is a perfectly simple (and cheap) exercise.

But when we went to Antalya in March we decided to take a hire car with us so we could drive back to Fethiye along the spectacular coastal D400 road.

Antalya To Fethiye By Car On The Coastal D400

Sometimes, it’s just great to be able to have the freedom to make stops wherever you please and take your time as you mosey on home to Fethiye. 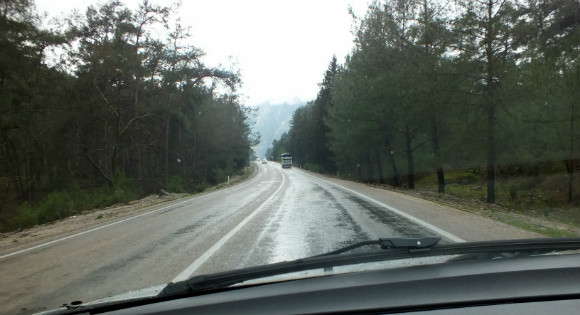 As we leave Antalya, the road is forested and, in places, misty

And the D400 is packed with places to make stop offs. You could spend weeks exploring this area as you pass coves, beaches and expanses of Mediterranean. There are mountains galore, holding, amongst other ancient treasures, Lycian and Roman ruins such as the ruins of Phaselis in Tekirova.

The D400 road is the 21st century version of the historic Lycian Way; these days, one of the world’s top long distance footpaths.

Driving in Turkey is a dream – once you’ve somehow negotiated your way out of the city centres. In city centres, signposts point the way – in every direction except the direction you need to be going in.

And Antalya is no exception. It took us some time to exit the city as we circled the centre, being diverted for roadworks just as we thought we’d cracked it and then finding ourselves back where we started. 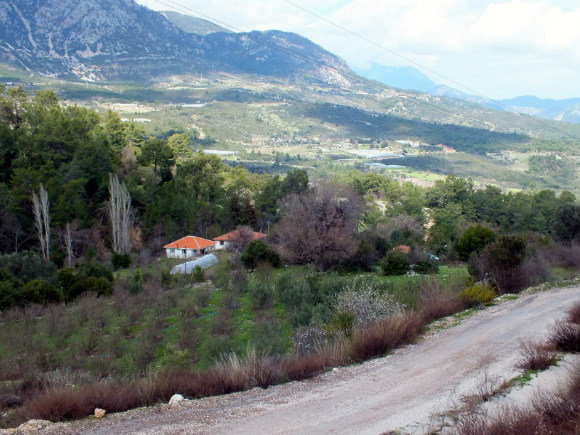 Heading down the mountain road to Adrasan Bay

At one point, we followed a one-way road with cars parked along both sides for around half a kilometre only to reach a dead end at the bottom. No warnings that this was about to happen and nowhere to make any sort of attempt at a 25-point turn.

As I huffed and puffed and rammed the car into reverse, a simit seller on the path that was creating our boundary between parked cars and the main road we needed, came to our rescue.

The cart was pushed to one side and he guided us over the lowest part of the kerb and onto the walkway. He then took himself off into the middle of the busy road, stopped the traffic and waved us onto our road out of the city.

Thank you Mr Simitçi. See, even amongst the stress and hassle of Turkish city centre driving, there’s usually someone around to put a grin on your face.

But once you exit the city, it’s happy days, and for us, the D400 coastal road takes some beating in the dramatic beauty stakes.

Our East Turkey road trip was memorable for the high plains and the vast empty roads that stretched beyond the horizon. The Antalya to Fethiye road trip is memorable for sheer drops plunging into the sea and winding roads that repeatedly climb high into the mountains before falling back towards sea level. 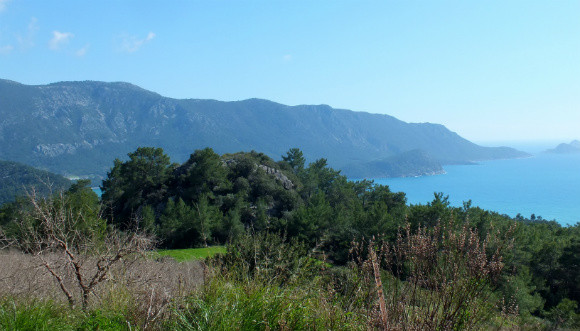 The coastal road towards Kumluca

On this particular drive, we were hoping to head down to Olympos. Unfortunately, after the harsh winter, we’d heard there might still be flooding down there, so we pressed on. Soon after, way down below us, we saw a bay; an idyllic-looking spec in the distance.

“That must be Adrasan. Let’s go and see.”

There are pros and cons to all modes of transport but one of the advantages of having a car occasionally is the ability to take off down mountain roads.

We’ll tell you about Adrasan in our next post because, for this post, we’re driving. The view you can see above is another happy lost photo. We’re in the Kumluca area of the Antalya region here and I had driven back along what I thought was the same road we had entered Adrasan Bay by. But no.

Not sure how we manage this but, once again, we’d somehow missed the road we needed.

No worries though because we had time on our hands, we had amazing scenery like this. And the beauty of the D400 is, if you’re heading from Antalya to Fethiye and the sea is to your left, you know you’re heading in the right direction.

GPS told us we were around Kumluca and that was good enough for us. 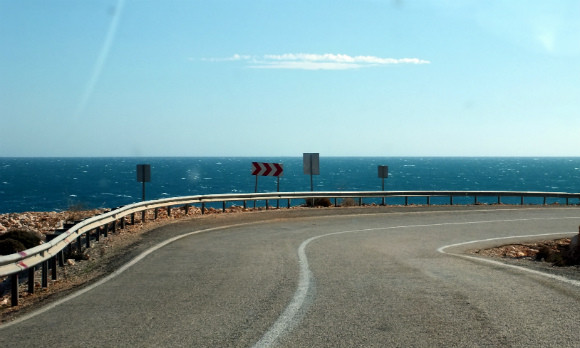 Sea views as we head towards Demre

Along many stretches of the D4oo, especially between Antalya and Fethiye, it’s just you, the road and the sea.

After a stop off at Adrasan and a minor detour, our mountain side road eventually spat us back out onto the D4oo and we decided to make another stop off at Demre, home to the Lycian and Roman site of Myra and, of course, home of the church and tomb of St.Nicholas. 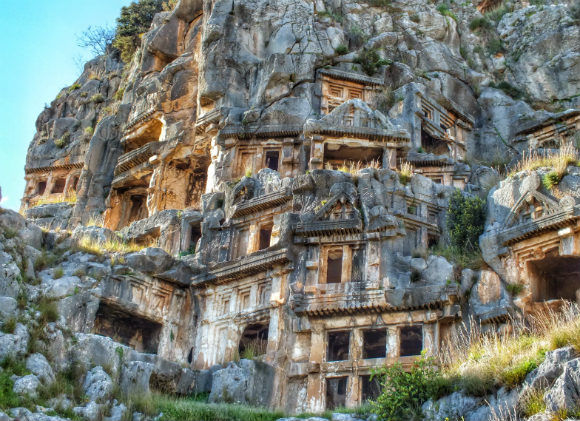 It was 9 or 10 years since we had last visited the site so it was time to reacquaint ourselves.

After our beach break at Adrasan and a fill of history and culture at Myra, this twisting coastal stretch of tarmac heads high into the mountains; lush greenery on either side of you.

If you have time on your hands, detour back to the coast to take in the pretty village of Üçağız. From here, you can take a short boat ride to Simena and around Kekova sunken city.

Back up to the D400 and now the road widens for two lane traffic. Eventually, straight ahead of you, is the town of Kaş.

Heading downhill towards the lovely Kaş

As nature was calling, we also decided to make a quick pit stop in Kaş, too. Well, we love this town so we don’t need too much of an excuse to spend even just a few minutes here.

Kaş is home to its own Lycian tombs, the Antiphellos theatre and achingly pretty Greek architecture framed with tumbledown bougainvillea. It ticks all the picture postcard boxes, shall we say and is always good for an overnight stay.

Turkey is a huge country and Antalya to Fethiye really is just a short jaunt across a small section of the south coast. But the history and the beauty that is bubbling and overflowing from this area makes it worth so much of your time. 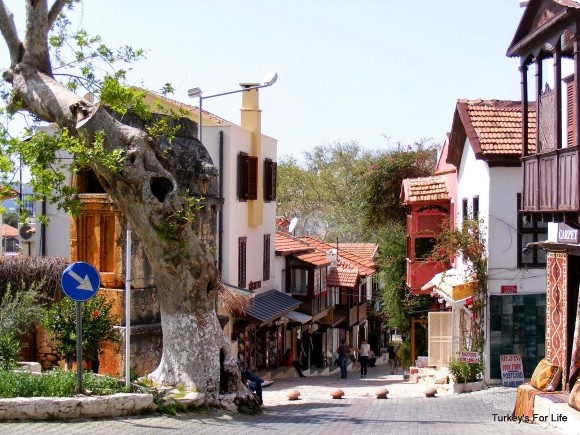 Kaş is always worth a stop off

Of course, Kaş is not the end of our road; it was just our final stop off before we hit the home straight to Fethiye.

Even in that home straight, the Lycians, Greeks and Romans make their presence felt as we pass mountains and flat lands that house Letoon, Xanthos, Tlos and the Patara ruins.

These are all sites we’ve dipped into numerous times over the years – we’re blessed that they’re so local to us. And there are more besides. But, if you’re driving this route as a one-off, it’s a tough decision as to which stop offs you’re going to make.

Oh yeah, and don’t forget you’re going to need to pull over so you can take photos of the picturesque wonder that is Kaputaş Plajı. 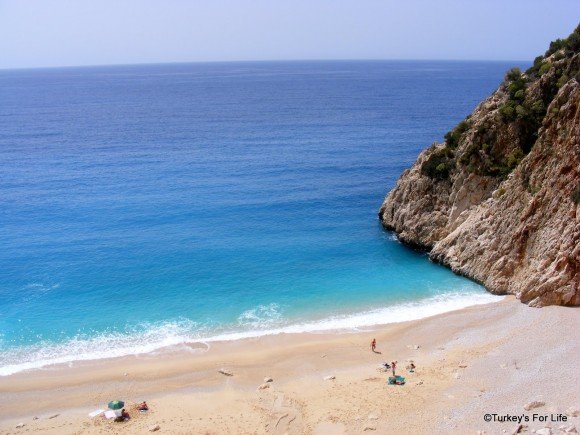 Climb down the steps to Kaputaş Beach

We said this route is famous for hikers who come to trek the Lycian Way. It’s also famous for drivers who enjoy the scenery of the D400.

And we have also done this route, from Kemer to Kekova and back again by gulet. So, if you’re more of a seafaring person, perhaps the gület route will suit you, too.

Antalya To Fethiye On The D400 – Useful Information

Hi, I am a big fan of your blog. There's so much information about Fethiye and Turkey in general. I wanted to know if you could recommend some good Rentacar companies in Fethiye/Calis. Most of the online reviews aren't very encouraging. Cheers!

Hi Asad, thanks a lot for reading. :) We always use Avis if we hire a car. They have an office along the Karagözler in Fethiye. Alternatively, if you go into Cafe Pazar in Çalış, you can hire the same Avis cars from there, too.

We did the Fethiye to Gulluk 3 hour trip many times, when we owned apartments in both places. Lots of sheep toys on sale, and a wonderful half-way stop, where there used to be a pottery, garage and restaurant with a gorgeous view. When the new road came, could not cross into this area from Gulluk to Fethiye direction, then the pottery closed. But good memories.

One of the aspects of life in Turkey - and perhaps lots of other countries, too - is things are always changing. The Antalya Fethiye stretch of the D400 is so much wider than it used to be and so many traffic lights, too, now. On the other side, the D330 now skirts Korkuteli, which is a shame but it does make the journey quicker. Nice to keep the good memories. :)

Your description of the road from Antalya to Fethiye reminds me overnight bus rides from Istanbul to the south coast. The scenery when you woke up in the morning was so beautiful, and there was a special atmosphere to all the chai stops along the way. Congratulations with you new layout btw. It's really nice:)

Glad you like the new layout, Mette. It's been a long time coming. :) Yeah, love overnight bus journeys and waking up in the morning to a whole new scene - even if it's the other way around and we wake up to an Istanbul rush hour traffic jam! :)

. . it's a sad day when the beauty that surrounds us becomes so commonplace that we lose sight of it and simply 'commute'. A timely reminder to 'smell the roses along the way'!

Much agreed Alan. A bus trip could even be seen as a commute probably but we still much prefer this to flights anywhere. Yeah, then we can smell the roses along the way. There's too much to Turkey to just hop on a flight and skip the in between bits out. :)