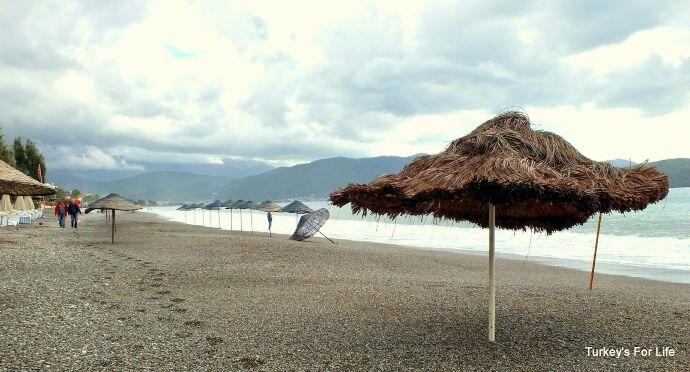 Wow, the end of yet another month! Where does the time go? We probably start off these monthly updates in much the same way…but the days do pass so quickly at the moment.

We thought, at the end of our September Fethiye roundup, that things would slow down a little in October but that was proved wrong. A week with family visiting, various events and, before we know it, here we are, sat at the end of the month again. November will definitely slow down…we think.

But anyway, let’s have a look at what’s been happening in our little world in Fethiye this October…

Cooking And Eating In Fethiye

This month, while my dad was over to visit, we got to try out one of the more recent additions to the Fethiye restaurant scene; Mancero Kitchen.

This is our review of Mancero Restaurant, which we can comfortably describe as a red-meat-lover’s dream. Another annual treat, when my dad comes to Fethiye is Çalış Beach Restaurant where we get our taste buds ready for the feisty chillies in their lamb or chicken tikka jalfrezi dishes. Sometimes, you just can’t beat a good Indian meal. Yummy!

November is usually the month of the Çintar (Saffron Milk Cap or Red Pine Mushroom) in Fethiye – but a couple of October downpours have meant they’ve sprouted under the local pines in the nearby forests and we’ve been enjoying some early çintar treats.

In the past, we’ve done recipes for çintar and spinach risotto and, using the same combination, we’ve also done a çintar and spinach börek recipe. This time, we wanted to try something a bit different so we experimented with a couple of new recipes this year. We’ll share those over the weekend and coming days.

Oh, and Brussels sprouts have also made an appearance on Fethiye market, too. After our sucuk, chestnuts and Brussels sprouts recipe, we’ve continued to actively embrace this seasonal vegetable, so we’ve also got another recipe coming up for you. Looks like November on the blog is going to be getting a bit foodie. That’s a whoop whoop from us!

Yes, it is time to slow things down a little. The Fethiye weather’s taken on a more autumnal feel; still pleasantly warm in the daytime but the evenings tell us the seasons are on the change.

The beach sunbeds of summer are piled up and mostly packed away, the umbrellas are following, and the local beaches are once more beautiful stretches of sand and shingle being smoothed out by occasional stormy waves.

Lovely to see them buzzing with people for part of the year…and now it’s time for a bit of solitude. Bliss. And by next April / May, we’ll be smiling again at the sight of restaurants and hotels opening their doors and people braving early season swims.

In the ‘right here, right now,’ though, we’re more than ready for an autumn and winter of normal, daily routine, hopefully a little bit of travel, hopefully a bit of trekking and lots of cooking. And all of that, of, course, will pop up on the blog. Bring on winter!

And yes, why on earth we thought October might become a bit more sleepy, we have no idea. My dad was here from 13th – 20th October so that was a busy week (we’ve got a couple of blog posts about that, too) and since then, all of this has happened:

We had the Ölüdeniz Air Games. A sunny first day, as you can see above, and then mixed weather for the rest of the Games.

That, however, didn’t stop all the adventurous types from throwing themselves into the air from Babadağ at various heights over the period of the events – it just meant the timetable needed a lot of reshuffling.

And, coinciding with the Air Games, the town got jet fever when Türk Yıldızları greeted Fethiye. After atrocious weather, they managed to do their performance in Çalış which we photographed, videoed and celebrated in the 1000th Turkey’s For Life blog post.

We also went through 50,000 views of our videos on the Turkey’s For Life YouTube channel and now also have over 160 subscribers. Amazing!