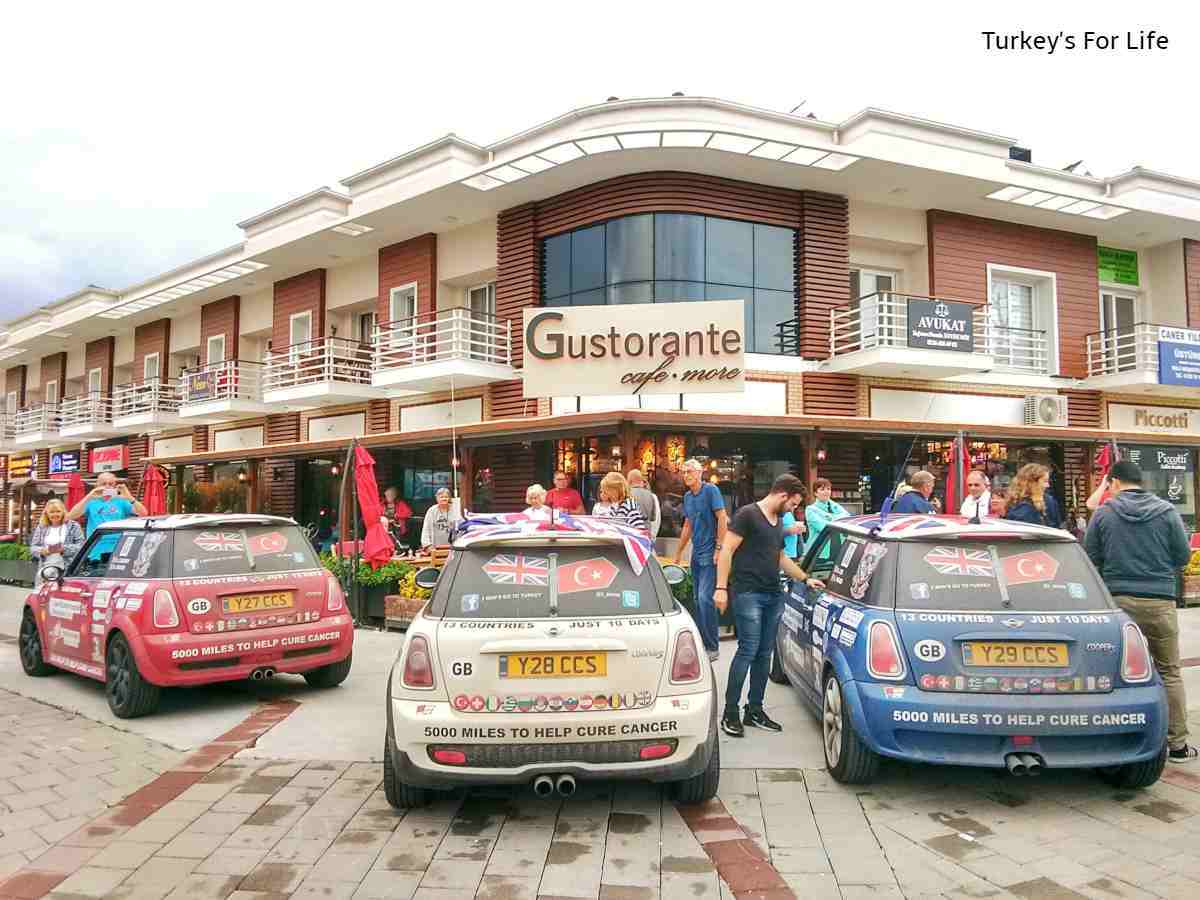 But yet, today, sitting typing this article, I’m thinking back to the beginning of May and it seems like such a long time ago.

Friends were here and it feels like an age since we saw them. All good, then, that life isn’t passing by too quickly!

Anyway, it’s been another busy month where the mild spring weather has suddenly burst into summer heat.

There’s never a transition period between the seasons in Fethiye. It’s as though the weather gods have a switch.

One minute you’re snuggled up under the duvet. The next, you’re lying on top of the bed with the fan whirring, wondering where your next breath of air is coming from.

The Merry Month Of May

Right, let’s have a look back at goings on around the neighbourhood and a little bit about what we’ve been up to.

In April, a few signs popped up around town announcing that the Fethiye Ultra Trail would be taking place in May and everyone was invited.

It got a few people talking because information was scant, but, after tracking down the website, Barry and one of our visiting friends decided to take part in the 10k.

The route was from Beşkaza Meydanı, out to Çalış Beach and back – so nothing too ‘ultra’ about that.

Hardcore ultra runners took part in 25k, 50k and 75k and took themselves off up into the mountains.

Anyway, a bit of chit chat with the organiser on the day – himself an ultra runner and friendly chap to boot – and we found out this was the second year for the event.

Last year, the start line was in a remote area. More visibility this year so, hopefully, more runners for the next event.

It was all a very chilled atmosphere and fun. Both Barry and our friend got a PB in the 10k so all was good.

The Fethiye Ultra Trail is scheduled to take place again next year in May. Now that we know of its existence, I might partake, too.

Arrival Of The Three Minis

‘Three Minis Go To Turkey’ was the name of their adventure.

These six chaps decided to raise money for cancer care in Birmingham (Queen Elizabeth Hospital) and Fethiye (Yaşam İçin Yarış) by driving three minis from the UK to Turkey.

We followed their journey via their Facebook page and headed to Gustorante in Çalış for their arrival, before they headed off up to Hisarönü.

It was an active holiday for our friends. A 10k run one day and walking the next. We were hoping to do the Ovacık to Faralya stretch of the Lycian way but transport logistics ruled it out on this occasion.

We opted, instead, for the more leisurely wander from Fethiye to Kayaköy.

And Kayaköy in springtime – wow, just so beautiful. Aside from all the cute lambs, goats and their kids, we were treated to fields of vibrantly coloured wildflowers swaying and dancing in the breeze. A real vision!

Of course, our walk ended with a reward of gözleme and cold beer!

On another day, we decided to take ourselves off around the Fethiye peninsula for a wander to see where all the beaches and bays were up to. And just to enjoy the amazing scenery, too, of course.

The walk prompted us to update our Fethiye Peninsula article with new photos and better descriptions.

Aksazlar Bay and Help Beach have already been back in action for some time.

If you’re a beachy person, check out our map of beaches in the Fethiye area.

For the past few weeks, Fethiye has had a ‘regions of Anatolia’ craft and food fair running. We love this fair.

The first couple of weeks had a Hatay street food stall that was serving up içli köfte, cağ kebabı, spicy pepper bread and other treats from Turkey’s southeast.

Whilst the Hatay food stands have moved on, the rest of the stalls have remained in Uğur Mumcu Park and will be there over the Ramazan Bayramı period before leaving on June 8th.

Künefe and sucuk are on the menu, but, as you can see from the photo above, you can also shop for other regional foods.

We bought a ginormous chunk of Black Sea bread a couple of weeks back that is sold by weight. Our dwindling nar ekşisi stock has now been replenished, too.

Fans of traditional cookware (like the pan used in our menemen recipe) can buy copper pans etc from a Gaziantep stall that has a whole range of shiny goods available.

This is the second year for the food and craft festival – we’re hoping it’s now an annual event.

If you want to know of any events that might be taking place while you’re in the area, keep an eye on our events calendar.

The warming up of the weather in May sees all the seasonal fruit and veg on the markets change to springtime treats.

Muşmullah (loquats) are plentiful, as are erik (greengage plums). And let’s not forget the Fethiye area’s fabulous cherries!

We’ve enjoyed a few springtime fruity treats but, if you know us well, you’ll know savoury – not sweet – is our preference.

We’ve already indulged in a few portions of homemade barbunbya pilaki and next on the agenda is refreshing green beans in olive oil.

These are all the dishes that tell us summer has taken the place of winter.

Think the next few weeks are going to see us filling the fridge up with lots more of our summery Turkish recipes.

Hummus (in celebration of International Hummus Day earlier in the month) has already graced the fridge and our dining table.

As for guacamole – not Turkish but a definite regular in the fridge, too. We can’t get enough of it.

Because the 2019 summer season is in its early days, we like to have a wander around to see what’s new and generally just to see how many people are around.

Early signs are good – it’s great to see so many people in the local bars and restaurants at this stage of the season!

At the beginning of May, for Turkish Mother’s Day, we took Barry’s mum to the newly opened Motif Restaurant along Çalış Beach.

Specialising in traditional Turkish cuisine, by the time we got around to writing our review, Motif was already hugely popular.

We don’t think they’ll need any luck for the upcoming season, but we’ll wish them luck anyway.

Here’s a bit of a rarity! We don’t head to Ölüdeniz very often but that could change this year.

The Özdemir family (they of Denizatı Restaurant, Seahorse Beach – amongst others – fame) have now added Captain Hook to their little empire.

Captain Hook was already an established bar and restaurant in Ölüdeniz and the Özdemirs have opted to make it into a seafood restaurant.

So, if you’re a seafood fan and in the area, give it a go. I had a great swordfish şiş kebab (that I forgot to photograph) and Barry had seabass.

You can see photos of some of their offerings on their Facebook page.

Paella fans will be happy to see paella on the menu with servings for different numbers of people.

Buzz Beach Bar – The Return Of The Roof Terrace

The next reason for us being enticed to jump on the dolmuş to Ölüdeniz is this! And this is also our most liked Fethiye Instagram photo for the month of May.

Back by popular demand. The return of the famous roof terrace at Buzz Beach Bar.

Ahhh, and what a top job they’ve made of it. So lovely to be sat up there again last Sunday afternoon, enjoying a cold beer.

And that probably just about wraps up May.

June will bring us Ramazan Bayramı and the Benyamin Sönmez classical music festival.

And we have more friends coming over to holiday. Sure we’ll have some tales to tell by the end of the month…