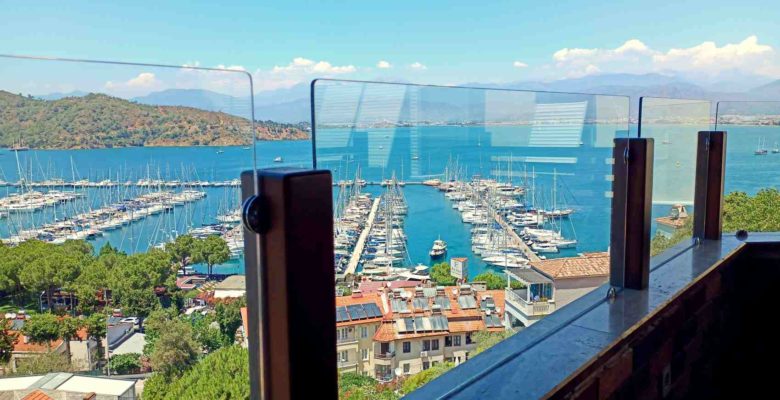 Yes, summer news. It’s all about taking each day as it comes, summer life in Fethiye. It’s hot!

We sleep in front of the fan. And hope it’s enough sleep to be able to wake up at a time that’s not too late to go out for a run.

And where I’m concerned, at least, I use the word ‘run’ loosely. More of a trundle along the harbour, armed with liquids for even the shortest of those trundles!

But that’s summer. Another few weeks and the temperatures will be more comfortable.

Beaches and pools come to the rescue. Especially the wonderful breezes of Çalış Beach.

And let’s face it; it’s not just us. We know lots of our friends in the UK are either loving – or just trying to muddle through – the hot weather, there, too.

So, throughout the heat of the July – and beginning of August sunshine – what have we been up to. And what’s been going on in Fethiye?

Here’s our monthly round up.

July is Barry’s birthday and we often go away for the weekend closest to his birthday. This year, it actually fell over a weekend and his choice of destination was Antalya.

That meant a chunk of his actual birthday was spent on the bus from Fethiye to Antalya but we made up for that once we got there!

We’re in Antalya for the first weekend of March each year for Runtalya. But we’d never been there in the summer months. We were intrigued to see how different – if at all – it was.

Anyway, a lovely weekend away staying in the old town of Kaleiçi. And, of course, we have some tales to share from there in the coming weeks.

We tend to keep a low profile through July and August.

Our UK friends have worked out that early and late season are the best times to enjoy Fethiye for them.

As such, our high season is actually quite quiet. Our stay in Rhodes Town at the end of June and then a weekend in Antalya, too – time to get back to a bit of the quiet life.

So no eating out of late – but we have had a few drinks here and there.

Motto is at the top of Çalış Beach so it’s nice to sit there after we’ve walked down to the beach in the heat.

Likewise, in the opposite direction. we walked down to Koca Çalış recently just to have a see what’s going on down there.

When we got back to the main stretch of Çalış Beach, Lukka made for a very inviting, shady oasis before we continued our walk back home.

And in the opposite direction, to Fethiye centre, well, visits to town have been few and far between recently. Purely for heat reasons.

During the Kurban Bayramı holiday, we just had to go to Paspatur and say happy holidays to the guys at Deep Blue. That’s tradition!

We also had a couple of Turkish friends here on holiday from Ankara so we met up with them a couple of times for drinks.

Terraces all round for those drinks. Cafe Park Teras and El Camino were the places of choice.

Rather than cooking meals, we’ve been doing our typical summer way of eating – a few different dishes out on the tables.

All cold, of course. There’s enough heat around without us adding to it.

As the local seasonal food scene currently features oodles of fresh beans, lovely lemony green beans olive oil has been on the menu. As has barbunya pilaki.

Obviously, salads have featured heavily and will continue to do so. What better than a refreshing, tasty melon salad on a roasting hot day?

And, the salad of this summer is the latest of our Turkish recipes that we added to the blog in July – Turkish orzo salad (şehriye salatası).

Like green lentil salad and chickpea salad, if the appetite really isn’t there for a bigger meal, orzo salad can fill you up as it is and give you enough energy through the pasta.

As well as our yummy orzo salad recipe, we’ve been busy adding new articles to the blog and updating existing ones.

After the Cafe Park Teras revamp, we brought our article about this great terrace bar right up to date.

And, after our long weekend on the island of Rhodes, we’ve started to share someof our tales and practical information from there.

So, we now have a comprehensive article about what to see and do if you make a day trip (or longer) to Rhodes Town.

And if you want to know about the journey, we’ve also written about the ferry from Fethiye to Rhodes.

The start of the season draws ever closer but we still have the rest of this month as a football-free zone.

The team took off to the much cooler climes of Afyon for a training camp, yesterday, ready for the start of the season. And season tickets have gone on sale, too.

Of course, there have also been new signings galore.

At the moment, the first home match is an 8pm kick off on September 4th.

A real shock when we saw this post appear in one of the Facebook groups we’re in. A sperm whale of 13-15 metres long swimming next to a boat off Fethiye.

Not sure how brave I’d have been had I been in the boat. But what an amazing sight.

Of course, that prompted research and there is indeed a (sadly endangered) population of sperm whales in the deep waters of the Mediterranean Sea.

And from sea to sky, Turkish paraglider, Akif Emre Gürer, took off from the summit of the famous mountain that overlooks Fethiye and Ölüdeniz, Babadağ.

He used thermals to fly for 6 and half hours and 143 kilometres, all the way to Konyaaltı in Antalya.

And A Much Anticipated Reopening

Absolutely nothing to do with life in Fethiye but very significant. And it’s a place we love.

Five years ago, Yerebatan Sarnıcı (Basilica Cistern) in Istanbul closed down for resoration and strengthening works as it was established that the cistern was under threat of collapse should there be an earthquake.

Then, of course, the pandemic came along which must have delayed proceedings.

In July, Yerebatan Sarnıcı finally reopened to the public. And from the photos we’ve seen, taken by friends in Istanbul, it looks amazing.

As well as changes to the lighting, there are also 3D art installations in there, too.

We can’t wait to return on our next trip to Istanbul to see the changes for ourselves.

Into The Rest Of August

There’s still a way to go for the rest of this month.

We’ll continue the day to day plough through the humidity and the calls of the cicadas and collect experiences and random Fethiye news events as we go along.

Enjoy the rest of your August!