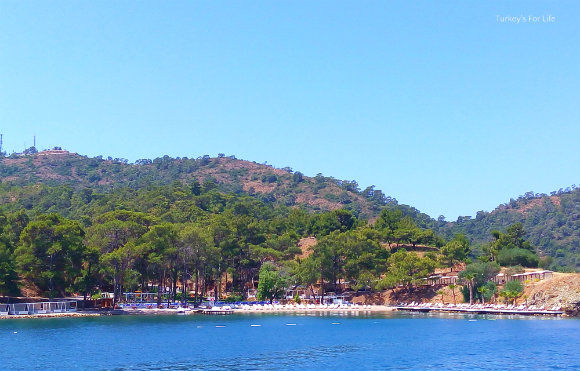 August has been and gone so it’s that time again where we have a little look back at some random news from Fethiye. Just like last month, it’s another bumper edition. We’ve been busy! August has been busy! And we’re getting organised, these days; keeping a note of what we’ve been up to. A lot can happen in a month. Let’s get going…

We always like to start off with an update for what’s going on along the final section of Fethiye harbour. And August brought a significant development.

Fences and screens have now been put around the perimeter of the whole zone for what will be Fethiye’s new recreation area. Future photos of progress may have to be taken from afar unless we can find some little gaps here and there where a camera lens can take a peek. Gates are left open, too, so we’ll be getting sneaky looks, here and there.

All around the fences are boards featuring the artist’s impression of what the new Fethiye recreation zone is going to look like. And, let us say, these are grand plans indeed. The photo above shows the whole project but we put an album on our Facebook page if you want to look at each section in more detail.

Waterways, trees, footpaths, seating areas, play park, skate park, windmills (interesting), viewing areas and – the bit we love the most – the running track will be continued to wind through the whole area. We’re not sure of when the official start date was but we’re on a countdown now, because, on the board at the top of this post, you can see that the works are going to last for 330 days. So, let’s see if we have our recreation area up and running next August…

Well we couldn’t not mention the weather in Fethiye for August. Usually, there’s nothing to report. It’s hot and it’s sunny. That’s it. Except things were a bit different in August 2017. Just look at the scene above. It happened for a few days in a row and we even got a few spots of rain! What’s all that about, eh?

Much appreciated by those of us looking for a little break from the intense heat. Not so much appreciated by the hardcore sunbathers along Çalış Beach. Clouds have hung over the mountains throughout the month, and, yesterday, on the last day of August, the distant thunder rolled and rumbled for a good few hours, despite the clear blue skies overhead. Wonder what September will bring?

And we know what happens when friends come over to play out in Fethiye. Daily routine out of the window with random food and drink thrown in for good measure. These friends stay at Letoonia every year – they love it – and have a 5 year old son who just loves water.

Not only does he love being in the water, he also loves water slides so the first thing he wants to do when they arrive is have a fun day out at Sultan’s Aqua City in Çalış. It’s become our annual August tradition, now. Naturally, friends to visit also means more time than usual spent at Deep Blue!

Yes, the season is upon us! Newly elected management team, new football team (bar two players) and brand new kit. Fethiyespor kicked off their 2017-18 campaign on Saturday 26th August and, yeahy, we got a 1-0 win over Hacettepe Spor. We also had two players sent off – not so ‘yeahy,’ but there you go.

We took our friends’ 5 year old with us – his first ever football match. He loved the whole thing and even joined in with the practice of eating köfte sandwich (loved the bread but not the köfte) and learning how to nibble on sunflower seeds! (So preoccupied were we with watching the match and making sure friends’ son was happy enough, we forgot to take photos. Thanks to our friends at Fethiyespor 1933 for this image of their match tickets.)

Eating Out Around Fethiye

This all ties in with the friends to visit, of course. We either end up eating out with them or, we get no real food shopping done, so we need to grab a snack en route to meet them. So, another kebab at Yengen has been consumed; cheap and delicious homemade Turkish food.

After around 12 years or so, we’ve also eaten at Meğri Lokanta again, just on the edge of Paspatur. No reason why we left it so long – it’s just one of those things. Anyway, if you’ve got friends like us who all want to eat different things at the same time, this lokanta could be the place for you. A happy mix of traditional Turkish cuisine and everything besides.

Dad wanted a döner kebab half bread. Mum’s a vegetarian but doesn’t like mushrooms, courgettes or aubergines. 5 year old son wanted a margherita pizza. Barry and I will eat just about anything, in any eatery, so we’re easy pleased. Anyway, everyone got what they wanted and everyone left happy. Result!

Yes, proper busy as far as the world of Turkey’s For Life is concerned. In between Barry doing all the Fethiyespor stuff, we’re still improving recipes from our Turkish kitchen collection and also adding new content. So, what’s happened on the blog over the last few weeks?

Well, our friend might not like aubergines, but August was an aubergine month for us. As a result, we’ve now improved our recipe for aubergine salad and also our baba ganoush recipe. It’s still summer and we’re still grazing on meze dishes.

Around The Fethiye Area

We like to keep our Fethiye Eating & Drinking page as up to date as possible and also reminding people of what’s on there. In August, we reminded readers of the institution that is Köfteci İmadettin. As usual, we’ve still got lots more additions to make to that page of bars and restaurants.

And we also shared a little reminder of one of our recommendations of must sees and dos when you’re in Fethiye. The drive to the summit of Babadağ and the amazing views across the Gulf of Fethiye and Şövalye Island.

Taking you back to July, you might remember we said about the tradition of going to Kabak for Barry’s birthday. We always drop into Sultan Camp to say hi and chill in their bar for a while when we’re there. And we have now also written the article about where we stayed this time. Here is our review of our stay at Full Moon Camp in Kabak.

Time To Hit The Beach

For beach lovers, this was our big project for August. It’s a page we’ve been meaning to do for sometime and the time came where we just has to sit down and plan it all out, rather than keep talking about it. Beach names, photographs and an interactive map so you know where each one is – this is our guide to Fethiye beaches and beyond.

There are links to the beaches that we’ve already written about and we’ll be adding to the page as and when – updates where necessary and new links when we write about each beach.

We’ve got a busy few weeks coming up in Fethiye. Now that the hottest temperatures have passed a few more local events are in the pipeline. Whenever you’re around the area, make sure you keep an eye on our calendar for news of what’s on in Fethiye. If we know of any big events nearby and also national events elsewhere in Turkey, they sometimes make an appearance, too.

Coming up over the next few weeks, we’ve got the Benyamin Sönmez Classical Music Festival (September), the International Ölüdeniz Air Games and the 5k Race For Life (both October). In August, we couldn’t make it, but pop star Hadise performed in Ölüdeniz to mark the ground breaking ceremony for the Skywalk Telerifik. In theory, that means the project is now underway and we could soon be getting to the top of Babadağ by way of cable car…

It’s no secret that tourism in Turkey has seen a big downturn over recent years. The good news is that people are returning, slowly, slowly. Russian tourism has significantly increased, especially for the province of Antalya. International tourists are returning to Istanbul and British package bookings were up for 2017, too.

The (hopeful) good news for tourism in this area of Turkey is that in August, Jet 2 announced that, due to demand, they’d almost doubled capacity for their flights from the UK to Turkey, introducing new routes in the process.

Dalaman is one of the airports that will be receiving many of these passengers. Sure local businesses will love to see a few more faces around in 2018. Fingers and toes crossed for that.

If you’re thinking of coming over then you can find loads of places to stay in the Fethiye area through Booking.com.

Bar the odd day here and there, we add a daily photo to our Instagram account. And, as Fethiye is home, many of those photos are taken around town. We like the share the photo with the most likes for each month. This is the Fethiye photo that got the most likes for the month of August. We all love a bit of Paspatur.

And that’s just about it. September is already in full flow, we’ve got more friends around this month and next month, too. Let’s see what’s in store…