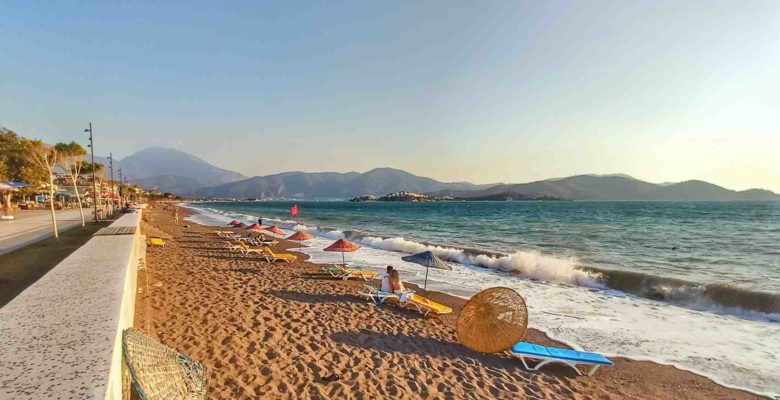 It’s been a crazy month that’s gone by like a whirlwind. But we’re not complaining!

After all the trials and tribulations of the pandemic and its effect on travel, we’ve had a great time with visiting friends – some of whom we hadn’t seen for three years.

Lots of catching up has been done. And we’re not done yet, either – the next arrivals land today.

In the midst of all of this, we’ve no doubt missed a lot of local goings on. But that’s how normal summer life is in Fethiye. We’ve missed ‘normal.’

Here’s our monthly news round up of what we’ve been up to. And a couple of the usual random extras, besides…

Let’s begin with a favourite topic of conversation for both Brits and Turks alike: the weather in Fethiye.

A cooler few days in August left us all feeling confident that the traditional breezier, cooler weather we usually get in September was upon us.

But no. It was an unseasonably hot and dry September that presented itself to us.

We did get a few days later in the month where stiff breezes whipped up the sea and the nights cooled significantly.

As I type, however, another mini heatwave arrived, meaning beach days are still very much part of the daily routine for holidaymakers in places like Ölüdeniz and Çalış.

In general, though, the shadows are longer and the mornings are cooler. We know we’re on the right path towards more autumnal temperatures.

We love this time of year for enjoying all that Fethiye has to offer.

A bit of a blip in proceedings due to the pandemic – so it’s great to see the return of the Fethiye Yaşam İçin Yarış (Race For Life) event for 2022.

The event will take place at the end of October. But registration opened in September for those who want to take part.

We’re yet to register but will definitely be taking part to donate towards funds that help people needing cancer treatment in Fethiye and surroundings.

If you’re in the area at the end of this month, you can register to take part or sponsor someone who is doing it. Sure everyone would love some support along the route, too.

Yaşam İçin Yarış is on our page of listings for running events in Turkey. You can keep yourself up to date with developments via the Race For Life Facebook group.

In our August news round up, we mentioned that over the years our UK friends have worked out that the cooler months of September and October are pleasant times to be around Fethiye.

So, it was a very low key July and August – months that are traditionally high season.

Our high season has been – and is – September and October.

It’s so lovely to see friends again. A couple of them did a week in Bodrum before coming to Fethiye. So we decided to drive over there to get them and share the driving back.

This gave us an excuse to have a busy midi-break, too. We stopped in Köyceğiz for lunch by the lake on the way there.

A night in Bodrum – and then on the way back, if you’re going to show your friends anywhere, you’re not going to go far wrong with a lunch stop in pretty Akyaka.

Obviously, we can’t afford to join in with everything our friends want to do on holiday. So we’ve had a couple of treats by way of an afternoon exploring Kayaköy followed by a barbecue at Cin Bal.

The current price of meat means Cin Bal is a real treat experince, these days.

And we also went on our first boat trip in three years!

Apart from Cin Bal, we’ve left the more restaurant-ish eating out to everyone else. Instead, we took part in the bar meals and takeaways.

Burgers at Büyük Ev in town went down well, as always.

And, a random first for us…

If you’re in need of a bit of very tasty hangover beige food – or you just want a little snack treat – Lee’s Bar along Çalış Beach do a fabulous crispy chicken.

We’ve never set foot in Lee’s Bar previously (no particular reason) but we’d had the crispy chicken recommended to us a few times and were curious.

Our friends were also keen to try it after someone recommended it to them.

It’s basic but really hits the spot when you’re in the mood. We’ll definitely be back for more of that at some point!

Paspatur, drinks at Deep Blue and Cafe Park Teras have also been on the agenda.

Yes, we’ve been enjoying a chillout weekend before the next lot arrive!

It’s a mixed start to the season for Fethiyespor so far. We’re yet to get to a match – part of the real life that seems to be happening around you when you’re busy playing out with friends.

We haven’t deserted them, however, and will be at the home matches when life settles down later this month.

For now, you can check out the previous results and future fixtures, here. And the league table looks like this.

Moving slightly away from Fethiye and along the road to Dalyan, 22nd September saw the unveiling of the statue that is a memorial to Kaptan June.

Very fitting for a lady who dedicated her life to the protection of sea turtles and the preservation of Iztuzu Beach.

We’ll be heading to see it next time we’re in Dalyan. If you’re in the area, and you want to see it, you’ll find it at the Kaunos Tera Gardens.

Yes, you read that right!

September saw the first sighting of a brown bear in Köyceğiz. The sighting was caught on the video traps that are set up in the area.

Whilst we’re not too keen on coming face to face with a brown bear in the wild, it’s amazing to know that an animal under threat of extinction is thriving here.

Conservation activities and monitoring are carried out by the Regional Directorate of Nature Conservation and National Parks.

A First Turkish Groom For The Greek Island Of Meis

And in some more happy news – because let’s face it, in the current climate we’re living in, any bits of happy news are much appreciated – the Greek island of Meis (Kastellorizo) has its first Turkish groom.

Kerem Ercüment married his Greek partner, Yorgia Karidoyani, after three years together. And they now have a restaurant on the island.

He isn’t the first person to marry a Greek person from the island, however.

Turkish woman, Hurigül Bakırcı married her Greek partner 10 years ago. She is originally from the nearby Turkish mainland town of Kaş. They now also live on the Greek island.

And that’s about it for the busy month of September.

No section this month for our experimentations in the kitchen for the simple fact that, bar the odd bit of köfte and piyaz, we’ve done very little in there!

The pots and pans are already being dusted off, however, ready for an autumnal cooking spree.

So watch this space…