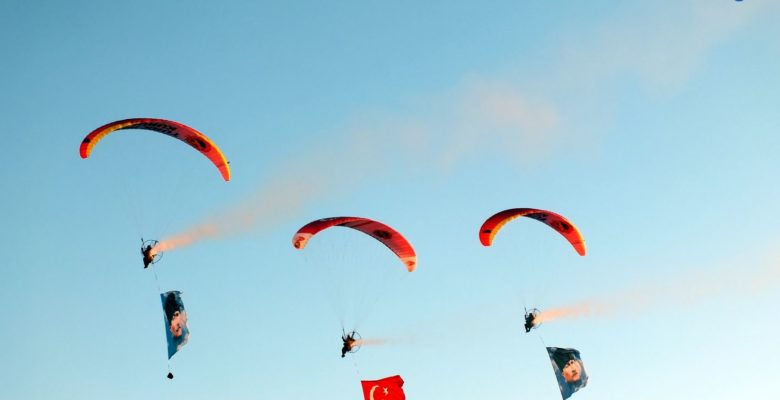 Another month passed. Just like that! And October has been jam packed with events around Fethiye.

Usual daily life has also continued – and slowed right down, too.

Friends who were here on holiday returned to the UK after the second week of the month. And we’ve returned to some sort of daily normality.

That means, although the Fethiye weather has been pleasantly warm this month, it has been cool enough to head back to the kitchen to actually use the oven without the feeling of absolute dread when extra heat fills the room.

So, with that in mind, let’s have our monthly Fethiye news roundup – a look at what we’ve been up to, and what’s been going on around us, over the last few weeks.

Obviously, the main event of any October in Turkey is on 29th October. It’s Cumhuriyet Bayramı – Turkish Republic Day.

This year was the 99th anniversary of the Republic. So now, all eyes and efforts are looking towards next year for the centenary.

This year in Fethiye, Republic Day was marked with paramotors (of course), a vehicle convoy, a torchlit procession along the harbour to Beşkaza Meydanı and then a live concert in the evening.

As the 28th is also significant – this was the day when Atatürk announced they would proclaim the Republic on the following day – there was a also a concert on that evening, too.

We’ve got high hopes for the 100 year celebrations, next year!

If you know Fethiye, you’ll know that the ancient Telmessos Theatre, overlooking the harbour, was undergoing restoration a few years ago.

And then proceedings came to a sudden halt.

The poor theatre has been fenced off ever since, partially restored, and out of use.

Well, thankfully, all that changed on October 11th when the theatre was reopened. People once more sat in the seats to watch performances – as the theatre should be used.

Hopefully, the theatre will be used for future events.

Before restoration, we went to a talk given by Louis De Bernieres about his book, Birds Without Wings, which was set in the nearby village of Kayaköy.

It’s a perfect setting and should be a much used feature of Fethiye.

Yes, the weather cools down a little and that means Fethiye kicks into event season.

We do miss some because it’s so difficult to keep up with them all in October but most of them are entered onto our events calendar.

So do keep your eye on that for any future events when you might be in town.

Sadly, despite all the fabulous weather we had throughout October, we got a bit of a damp and stormy few days which coincided with the Benyamin Sönmez classical music festival.

One of the orchestra performances was due to take place at the newly reopened ancient theatre, so guess we’ll have to wait another year for that to happen…

No Türk Yıldızları (Turkish Stars) display this year. But the International Fethiye & Ölüdeniz Air Games was still a great success with paragliders, skydivers, paramotor display team and hot air balloons all contributing to another great event.

The weather was perfect!

We hadn’t been over to Ölüdeniz this summer so we used that as an excuse to make a visit there for the day.

Lovely to see all the seafront bars and restaurants packed out so late in the season. It’s a fantastic end-of-season event with a good final boost for businesses.

After the upheaval of the pandemic, it was so lovely to have Fethiye’s Race For Life – Yaşam İçin Yarış back on the calendar again.

And what a lovely morning it was, too.

Perfect weather for the event on October 30th.

We were runners and walkers, wheelchair users, and babies being pushed in prams taking part in the 5k route.

All to raise money for the improvement of care for cancer patients in Fethiye and nearby areas.

This year, as well as the ‘race’ itself, there was live music from local band, Voyn after the medal presentations.

And this was followed by the Üzümlü Stompers who were completing their 5k line dancing effort – the equivalent of the race route.

A handful of food stalls selling homemade gül böreği, aşure and the like kept us fed whilst we enjoyed the event.

Hopefully, lots of money raised both on the day and throughout the year by those who hold other supporting fundraisers.

Especially in Dalyan, there are numerous quiz events that contribute lots of lira to the pot!

There are lots of photos from the day on the Yaşam İçin Yarış Race For Life Facebook group.

Keep an eye out for updates about next year’s event, too.

More time at home means more time for the blog. And more time in the kitchen.

Which also ties into the blog, of course.

Autumn sees a flood of fabulous seasonal produce on the local markets.

It was so lovely to be able to peruse the aisles of Çalış Sunday market last week without feeling the need to escape due to overheating!

Pomegranates are gradually making an appearance. And pumpkin and other squash varieties are piled high.

So, pumpkin soup – our first homemade soup of autumn 2022 – and Turkish pumpkin dessert have both been on the radar.

Autumn vegetables were used to make a vegetable güveç.

Another winter treat has also made an appearance very recently.

Our urge for Izmir Köfte got the better of us. So that was a meal for us in the last few days of the month.

Hallowe’en actually wasn’t pumpkin soup. The last day of the year was given over to a very famous – and traditional – Turkish soup; tarhana çorbası.

All meals we’ve been waiting to eat and enjoy as the autumn temperatures have made themselves felt.

Slowing down of daily life and more time in the kitchen means not a lot of being out and about, at least for the month of October.

A lovely kokoreç half bread at Lokum Kokoreç on Yerguzlar Caddesi is as exciting as it gets on the eating out news.

Earlier in the month when friends were still here, we parked ourselves at Deep Blue Bar (of course) in Paspatur and Cafe Park Teras.

And when we’re shopping in town, Büyük Ev is most often our refreshment stop, these days.

Because it’s close to where we live – and because we like to sit by the water – Denizatı Restaurant has been a good chillout spot for us, too, over the last few weeks.

In November, we’ll be sure to make the effort to eat out at least once – even if it’s a simple – but never disappointing – gözleme, somewhere.

What to tell you of Fethiyespor?

The usual tale – they win some, they lose some. And there’s sometimes a draw in between.

This is evident by the current league standings.

You can see past results and future fixtures, here.

Because the weather has cooled down, future home fixtures are now in the afternoons. That makes life much easier for us for getting to the matches!

Oh, and if you’re in town and looking to buy a Fethiyespor shirt, the store in the town centre is no longer open. You can buy them at the stadium.

We’ve been crazy busy with the blog this month – updating and tidying up articles that are already there.

New photos and tweaking our Turkish recipes – and adding any necessary updates to travel posts. Nothing stays the same for long in this world!

Turkey’s famous Antep Ezmesi was one of the first recipes we added to the blog over ten years ago, so that’s been freshened up with some more up-to-date photos.

Upper and Lower Düden Waterfalls in Antalya is the latest travel article to be published on the blog.

14th October was National Dessert Day in the US. A perfect excuse for us to indulge in sharing our naughty-but-nice Turkish desserts post.

And 16th October was World Archaeology Day where we shared our list of Turkish UNESCO World Heritage sites. Some great archaeology news for you in our ‘In Other News’ section below.

We’re neither vegan nor vegetarian. We just love food and will happily eat our way through most dishes, whatever their ingredients.

If you are looking for some inspiration, though, there are loads of fabulous Turkish vegetarian and vegan dishes in this list.

And In Other News

We like this section – there’s always a bit of news that we come across each month that we want to share.

It’s not necessarily about Fethiye and not dedicated article material – but worth sharing, nonetheless.

Some good travel news to start with this month.

A while back, we told you that a ferry service between Izmir in western Turkey and Thessaloniki in northern Greece was going to be launched.

Stories like this are often reported, you get quietly hopeful…and then you never hear anything about it again.

Well, the great news is that October saw the beginning of that service! The maiden voyage to Izmir left Thessaloniki on October 10th.

The capacity of the ferry is 948 passengers and 300 vehicles. And the journey time is around 15 hours.

You can read more, here, about the Izmir to Thessaloniki ferry.

And more good news from the world of Turkish-Greek travel.

This winter, if you’re in Fethiye, you will be able to make use of the Fethiye to Rhodes high speed ferry twice a week on Fridays and Sundays.

Like Fethiye, Rhodes Town is a working town and lots of places are open year round so a day trip or a weekend is worth it.

Just another reason to be in Fethiye in winter.

News From The World Of Archaeology

And two big archaeological stories quite rightly made the news in October.

In Demre, just along the coast, east of Fethiye, is the Church of St. Nicholas of Myra (yes, he of Santa Claus fame).

In our article, we link to a 2017 Guardian article about how Turkish archaeologists had identified the location of a temple beneath the church. It was thought the tomb of St. Nicholas was in this temple.

In October this year, archaeologists said they have now uncovered the remains of the first church and the floor on which St. Nicholas stepped.

We look forward to a return visit to the church and nearby Myra ruins, soon!

And then, over at the ancient city of Ephesus, there’s always something new being unearthed by archaeologists, there. This place is amazing.

In October, we got news of the biggest and most important find since the terrace houses were unearthed.

A 1,400 year old Byzantine district is being unearthed. Storage areas have been found with vessels containing their original goods – cockles, salted mackerel and oysters!

You can read all the details in this Arkeonews article.

Of course, we’ll be updating our own articles on these sites in due course.

We always love an excuse to be in the Selçuk and Şirince area – and another visit to Ephesus is as good a reason as any.

Well, we’re just making the most of the pleasant autumn temperatures at the moment and enjoying each day at a time.

We’re sure though that by the end of the month, we’ll have more than enough news to pass on to you!

The month is yet young. A lot can happen! Watch this space…